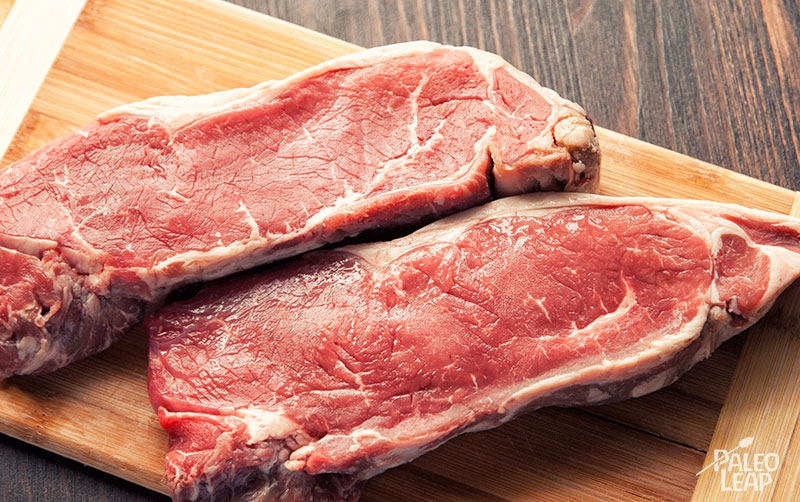 The art of cooking the perfect steak can be intimidating for many, but it doesn’t have to be, because with only a few basic techniques you’re guaranteed to experience great success every time. There is absolutely no need to go to a great steak house to eat some of the most flavorful steaks out there, and in fact even those restaurants often make some very fundamental mistakes when cooking their steaks.

Another aspect that is very important for us, health savvy people, is that we obtain an end product that is not only tasty, but also health promoting. Therefore, opting for grass-fed beef over grain-fed and choosing the right fat to cook the steak with will not only reward you with a much tastier steak, but also with something that you’ll know to be good for your health.

First of all, if you really want the experience of a great steak, I urge you to choose a steak that comes from beef that has been grass-fed and grass-finished. I’d rather choose a grass-fed cut that’s less tender than a tender cut from a grain-fed animal. A great steak dinner is often a meal where you won’t want to go cheap anyway so focus on the quality of the meat and then on the quality of the cut itself.

If you buy your meat from a butcher or from the grocery store and you get a chance to see what it looks like before buying it, there are a few key points to look at to get the best steak possible. It should look dry and it should also be firm to the touch. A steak that looks wet probably hasn’t aged correctly and will be less tender and less juicy when cooked. Also look for a vivid red, almost purplish, color and clear white fat marbling.

A steak is usually graded by the amount of fat marbling that it possesses. The more marbling it has, the more expensive it will be.   Keep in mind though that grain-fed animals are fed a bad diet so they can be fattened quickly, but this fat will be high in omega-6, deprived of fat-soluble nutrients and often full of toxins. I would therefore look for lots of marbling, but only when it comes from a healthy animal.

If you buy a steak that comes packaged in plastic wrap, it’s a good idea to remove it from its package when storing in the refrigerator to let it breathe and dry correctly. You can put your steaks on a grid placed on a plate in the refrigerator, covered with a clean towel and it will benefit the steaks greatly.

The different cuts of steak 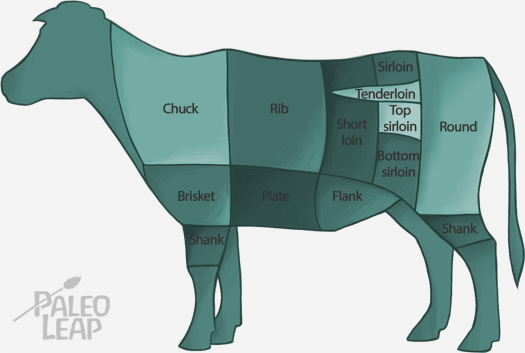 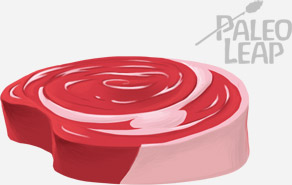 The rib eye: The rib steak and the rib eye steak are probably the two most delicious and prized cuts of steak available. They come from the rib region and the rib eye is simply a rib steak without the bone. They are tender and tasty, mainly because of the abundant marbling of fat that they have. It’s also a really good sized steak that shouldn’t leave you hungry for more. 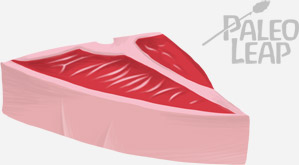 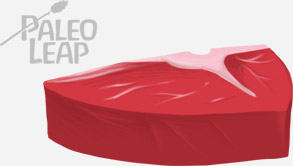 The porterhouse: The porterhouse steak is also a large steak suited for large appetites. It resembles the T-bone, but differs in that the tenderloin and strip loin portions are much wider. The porterhouse comes from closer to the sirloin of the steer. 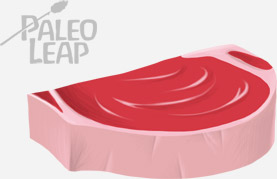 The strip loin or New York: The strip loin or New York cut is a triangular steak found on one side of the T-bone and is usually a very good looking, tasty and tender steak. It’s a smaller steak than the T-bone or the porterhouse and is in a good middle range when it comes to taste and tenderness. The picture on the left is from a Wagyu beef that has been bred to contain much more fat than regular beef, so don’t expect this much marbling on your steak. 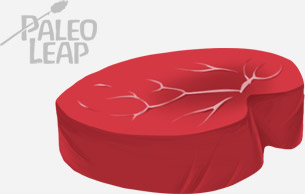 The tenderloin: The tenderloin is the most tender cut of steak you can get, but even though it’s very tender, it’s far from being the tastiest. It’s quite lean and it has very little fat marbling so what it gains in tenderness it loses in taste. This is also often a much smaller steak, depending on its thickness, than most other steaks so it’s great when the steak is not the main attraction of the meal. It’s also a great steak to let marinate prior to cooking to give it more taste.

There are a few key steps to consider prior to cooking the steaks. First and foremost, it’s really important that you let the steaks come to room temperature before cooking them. This ensures a more even cooking process and permits the steak to spend much less time in the pan or on the grill, which will lead to a juicier steak. Simply place the steaks on a grid or on a plate and let them come to room temperature for 30 minutes to 2 hours before cooking them. It will often make a world of difference.

When the time comes to finally cook the steaks, pat them dry and season them with sea salt and freshly ground black pepper. Most prime cuts of steak only need the basic salt and pepper seasoning. An elaborate use of spices would only hide their delicious flavor. Use fancy spice mixes and rubs when cooking tougher and less flavorful cuts of steak. Some people like to season their steak long before they cook it, but seasoning it just before is probably the most popular option.

The next step is to rub some melted or very soft cooking fat all over the steaks. Clarified butter, tallow, lard and coconut oil are all good options. Stay far away from olive oil when cooking steaks because the cooking temperature will be too high for the oil, which would ultimately make it smoke, take a nasty flavor and become oxidized, a bad deal for your cells. Even lard is on the edge of being too fragile because it’s mostly composed of monounsaturated fat. If using coconut oil, keep in mind that the extra-virgin coconut oil often carries a subtle coconut taste that could be off-putting for the final result. My two favorite options are beef tallow or clarified butter. The milk ingredients in regular butter can easily burn as well so this is why clarified butter is a better option.

Grilling steak is a very popular option, especially in the summertime. On the grill, the best option is to sear the steaks on the hottest part of the grill for a few minutes on each side, turning only once to form grill marks and then finishing the steaks on the cooler part of the grill for a few more minutes, until the desired doneness is reached. Grilling though is an acquired skill that needs practice and a few mistakes to be mastered.

If you decide to go with pan frying the steaks, heat a frying pan to a very high heat. Stainless steel and cast iron pans are good choices. You’ll want to fry your steaks over a high heat so this is why I recommend rubbing the fat over the steaks instead of melting it in the hot pan prior to adding the steaks. Even highly saturated animal fats aren’t invincible to extreme heat and could smoke if placed in a pan that’s too hot for too long.

When pan frying steaks, there are two main schools of thought about the best way to proceed: the “flip once” method and the “flip often” method. Here is a short explanation of both methods:

The flip once method

This is the classic and most popular way to pan fry steaks. You’ll flip the steaks only once during the entire cooking process. A challenge with this method is to know when it’s time to flip the steaks. One easy way is to look for small droplets of blood that start forming on the uncooked surface of the steak. When you see those small droplets, turn the steaks with tongs and cook on the other side until they reach the desired doneness. Tongs, instead of a fork, will prevent piercing the meat and letting the juices run out.

With this method, you’ll be flipping the steaks about every minute. This seems counter intuitive to produce a nice brown exterior, but it does in the end lead to the desired result. The advantage of this method is that the juices will be going from one side of the steak to the other constantly, leading to an often juicier and more evenly cooked steak.

Whatever method you decide to use to cook your steaks, you can always enhance the flavors with garlic and rosemary, two items that are a perfect match with beef. While the steaks are frying or grilling, simply cut a fresh clove of garlic in half and rub the cut side all over the surface of the steaks. Then simply pat a sprig or two of fresh rosemary on the steaks. It might seem trivial to simply rub a garlic clove and pat a rosemary sprig, but those two steps really add great flavor.

You can always choose to be very precise and use a thermometer to determine the exact doneness, but I found that nothing beats experience and after cooking a few steaks successfully you’ll get a better feel for when they’re ready. Cutting the steaks to look at the flesh is probably not the best idea because it will let all the delicious juices run out of them.

An important, but often forgotten step when cooking a steak is to let it rest for 5 to 10 minutes after cooking it. This step is important to let the proteins relax and to let the juices redistribute evenly inside the steak instead of flowing right out of it. Simply place the steaks on a cutting board or a plate and cover them very loosely with a sheet of foil with a small whole pierced on top to let the steam get out. This prevents the steaks from being overcooked by the steam.

By resting the steaks like that, you’ll be able to collect some of the juices that run out and use those as a simple sauce for the steaks. Simply add a few drops of lemon juice and melt-in a few knobs of butter, clarified butter or tallow for a very delicious and luscious liquid to serve with the steaks. You can make another great and very quick sauce by deglazing the very hot pan you used to cook the steaks.

After all this preparation finally comes the time where you can serve the steaks alongside a simple salad or a side of your favorite vegetables, steamed or roasted, and enjoy the best of what nature has to offer with your friends or family.