If you’ve ever gone out on a limb and bought half a pig, or a freezer lamb, or even just gone in for the oxtail or beef tongue on a whim, you might know the sinking feeling of staring down that paper package, rereading “Inspected and Passed by U.S. Department of Agriculture” over and over, and realizing you have no idea what to do with this.

Well, put on your chef’s hat and grab that package out of the freezer, because that’s about to change!

In this article, you’ll get a quick introduction to the most common kinds of odd bits, with a heavy focus on using them in recipes that you already know. No hours of soaking; no arcane culinary secrets; no fiddly recipes that take all day; no esoteric and expensive equipment. This is a resource for people who are just starting out, who might not be confident in cooking with all these weird bits and pieces, and who need a little help making it work.

Try to approach cooking with organ meats in a spirit of adventure. Pick a day when you don’t have a lot going on, so you don’t feel rushed. It helps to have a pound of ground beef in the fridge as an emergency dinner in case your adventure ends badly. And then – just go for it!

What have you got?

You’ve got an organ? Congratulations: you have your hands on one of the most nutritious pieces of meat around. Below is an alphabetical list of common organ meats, with suggestions for how to make them delicious:

Brain is primarily prized for its texture – done right, it’s like biting into a creamy, fatty cloud. Before using them in a recipe, brains should first be poached; do this just like you would poach an egg. After that, it’s up to you! An easy way to use brain in a recipe you already know is to make it with scrambled eggs. Chop the brains up into small pieces. Heat some fat in a skillet, cook the brains a little, then add the eggs and cook exactly the way you would cook scrambled eggs at any other time.

Gizzards are organs only found in birds; you can get them from chickens or turkeys.

They’re also amazingly convenient because they’re the perfect size for meatballs. It’s like the bird already made the meatballs for you, and all you have to do is cook them! How convenient is that? Try them in this recipe to replace the meatballs and see how you like it. 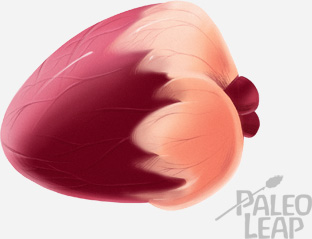 Hearts from other animals are also delicious. Chicken and turkey hearts, for example, are wonderful in soups and stir-fries. Chicken hearts are very bite-sized, so you can use them in anything that calls for meatballs. For turkey hearts, just cut them in half and enjoy the same way. Or slice them thin and pan-fry them to put on top of a salad; they taste just like the rest of the animal.

Kidney isn’t a great choice for a beginner, because it’s very much an acquired taste. But if you’re familiar with easier organ meats (like heart) and looking for something new, why not try some Irish kidney soup?

There’s nothing quite like liver for concentrated nutrition, but at the same time, coming to terms with the taste can be a challenge. This section in our article on liver has some great suggestions for cooking it, both for the liver-lovers and for the reluctant “I know it’s good for me but that doesn’t mean I have to like it” crowd. Check it out to find one that makes you actually look forward to your liver, not dread it!

For a recipe that you already know how to make, try replacing half a pound of the beef in this chili with half a pound of very finely chopped (or pureed) liver: you’ll never taste it, and it adds so much in terms of nutrition.

Like brains, sweetbreads have a wonderful creamy texture and a very mild flavor. First poach them just like you would poach an egg. Once they’re poached, they’re delicious pan-seared in your favorite cooking fat with some onions and herbs. Try cutting them into bite-size pieces and then simply using them in this recipe in place of scallops.

Tongue is a tough sell, as organs go, but here’s its secret: it’s only hard until you get the skin off. Once you “peel” the skin off the tongue, it’s basically a very lean roast: perfect for slow-cooking and shredding into taco meat. Try it in this recipe instead of the chuck. You can just throw the whole tongue in there; once it’s cooked, the skin will fall off almost without effort. Take it out of the slow-cooker, peel away and discard the skin, and continue with the recipe as written.

Boney parts (like necks, hocks, and backs) are delicious once you know their secrets. In general, the trick is to cook them low and slow. This accomplishes two things:

If you have a foot or another bit with very little meat, you can just toss it into a pot to make broth (recipe here). Feet and odd bones make a delicious, very gelatinous broth. Or you can add miscellaneous boney bits to pretty much any soup you make, and just fish them out before you eat the soup (an easy way to do this is to make a little bag out of cheesecloth and put the bones in there: the nutrients will all leak out into the soup, but the bones will be easy to remove).

If you’ve got a little more meat, try something like…

Or if you’ve got a nice thick bone, why not try roasting it to enjoy the delicious marrow inside?

Bones and boney bits don’t always make a meal all by themselves, but they have an amazing power to take humdrum dishes to a new height of flavor and texture, all with almost no effort from the cook.

You’ve gotten your hands on some fresh raw fat? That’s a Paleo gold mine just waiting to be explored. The trick is to render the fat. Rendering isn’t difficult at all; it takes a while, but most of that time the fat is just slowly simmering away while you do something else.

The most confusing part about rendering fat is figuring out all the names for everything. Here’s a chart to break it down:

The reward for your effort will be a big jar of creamy, healthy fat to make your vegetables absolutely irresistible. Just try a sweet potato with a pat of lard instead of butter, or roast up a pan of crispy potatoes in some schmaltz. It’s a whole new world of Paleo flavor, from the most delicious macronutrient around.

As a bonus, you’ll also get a handful of cracklings: these are little bits of deep-fried skin and tissue that float to the top of the rendered fat. Don’t throw them out! They’re delicious: toss them in the skillet to pep up a plate of fried vegetables, or sprinkle them in a soup for a wonderful flavor boost.

These are easy: toss them in the pot with your broth! Most people don’t want to eat the tendons themselves (they tend to be very rubbery), but they add nutrients and body to the broth.

Blood can be drunk straight, if you’re a Maasai warrior, but most of us prefer it in other ways. Many Asian soups – like this one – are traditionally prepared with blood. This recipe might also give you an idea (it’s for rabbit soup with blood, but easily adapted to any animal)

Skin can be easily converted into the most delicious snack food you’ll ever eat: cracklings! These are traditionally made from pig skin, but you can fry up the skin of a cow or even a chicken in pretty much the same way (although for a chicken you’ll have to add some fat, since the bird itself doesn’t have enough).

Got something else? Or can’t identify what you do have?

No one post could hope to exhaust the amazing possibilities of organ meats. If you’re looking for a comprehensive cookbook, Jennifer McLagan’s book Odd Bits is a good place to start. Her recipes aren’t “Paleo,” but she has very helpful general instructions for preparing every part of an animal you could possibly think of, from chicken combs to pigs’ ears to blood. Another great book is Fergus Henderson’s The Whole Beast: again, not intended to be Paleo, but since the main focus is on the meat, it’s great for inspiration.

For the online crowd (or if you want something free), vintage recipes is a wonderful site full of recipes from the days when cooking the whole animal was just the normal thing to do. There’s a whole section for sweetbreads, and another just for tripe. Click on “beef,” and you’ll see separate sections for brains, calf’s head, and liver, and the first recipe is for tongue. It’s really a treasure trove. Again, these recipes aren’t intended to be “Paleo,” but most of them are easy to adapt.

Don’t spend too long agonizing over recipes, though: the most important thing is to just get out there and get your hands dirty. You learn to cook by cooking; pick your favorite odd bit, put on your lucky apron, and go for it!