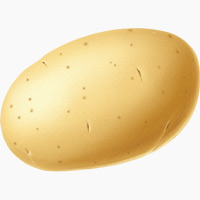 White potatoes: beloved by the Irish, downed in vast quantities as chips and fries, and a lethal agent of Neolithic poison and disease? Not quite. Potatoes are a perfect example of why Paleo imitation is a shortsighted and suboptimal nutritional strategy. If you’re interested in eating only foods available in the Paleolithic, then potatoes would be out the window, but if you prefer to eat as healthfully as possible based on evolutionary principles, there’s nothing wrong with them.

This is true (white potatoes are very high in carbohydrates), but it’s not an argument against eating them. Read the safe starches article to find out more about the place of carbs on a Paleo diet: the short version is that people eating traditional diets all over the world have been thriving on a wide range of carbohydrate intakes since we first figured out how to cook a tuber (probably quite a while ago), and there’s nothing wrong with carbs for a healthy, active person. Carbohydrates as a macronutrient aren’t dangerous at all; the real problem is the toxins that often come packaged with them, like the gluten in wheat or the phytic acid in other grains. Starches like potatoes, which come without these toxins, aren’t anything to be afraid of.

The only people who might want to avoid carbs entirely are people with metabolic disorders like diabetes, or people who are trying to enter ketosis for any reason. In this case, though, a low-carb diet is a therapeutic approach to address a specific problem; it’s not a template for healthy people to automatically adopt as well.

Another argument against white potatoes is that they’re somehow “nothing but carbs,” or less nutritious than the favorite Paleo “safe starch,” sweet potatoes. If we have a choice, the argument goes, we should choose to get as many micronutrients in our diet as possible, so white potatoes are an inferior choice.

This is a perfectly legitimate argument, but the problem is that white potatoes don’t actually lag far behind their more colorful cousins in nutritional content. Take a look at the nutrition information for 100 grams of raw sweet potato and white potato (if you follow the links, make sure to set the drop-down menu to 100 grams of each, to get a fair comparison). The two finish pretty much in a dead heat. For most of the micronutrients listed, both sweet and white potatoes provide between 0 and 5% of the RDA. Both have 10% of Vitamin B6. White potatoes win for Vitamin C (33% vs. 4%), but the real standout is the sweet potato’s unquestioned dominance of Vitamin A. Since there isn’t much of a difference anywhere else, the Vitamin A in sweet potatoes must be the reason why they’re always touted as so much more nutritious.

This isn’t nearly as important as it looks though. 284% is an impressive number, but the “Vitamin A” in plant foods is all found in a form called beta-carotene, which is actually a Vitamin A precursor that your body has to convert first. The conversion depends on a lot of factors (including whether the sweet potato was cooked or raw, how much fat you ate with it, and whether or not you’re Vitamin A deficient), but in general it’s not very efficient. 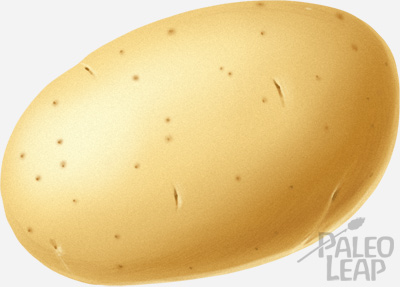 White potatoes also have a little less fructose, so the carbs found in white potatoes are a healthier balance of sugar and starch. Again, there’s no convincing evidence here that either type of potato is the obvious “first choice.”

When comparing white and sweet potatoes, many people also like to point out that white potatoes have a very high glycemic index. Glycemic index is a measure of how much a food increases blood glucose. If you compare two foods, the one with the higher glycemic index is more “carby:” it raises blood sugar more and thus has more potential to set off metabolic complications if consumed in excess.

In terms of nutritional quality, this is actually more a benefit than a curse. Glucose is much more available to the body, and more easily absorbed for muscle recovery after exercise. Fructose isn’t bad in the natural amounts found in fruit or sweet potatoes, but it’s still not ideal as a carb source. White potatoes might have a higher GI, but that doesn’t actually indicate that they’re any less healthy.

Another reason for avoiding white potatoes is that they belong to the nightshade family, a group of vegetables that also includes tomatoes, eggplant, and bell peppers. Nightshade veggies contain a type of chemicals called glycoalkaloids that can trigger leaky gut symptoms in people who are intolerant to them.

This objection is legitimate and true, but it only applies to a few people. Nightshades are bad news if you have an autoimmune disorder and may play a role in chronic joint pain, but most healthy people can eat nightshade vegetables without any problems. Just like with starches, it’s sometimes useful for sick people to avoid a group of foods to treat a disease, but that’s not a compelling argument for why healthy people should avoid the same foods. It’s also worthwhile noting that most of the glycoalkaloids in potatoes are in the skin, so you could just peel your potatoes to avoid the vast majority of them.

This obviously isn’t a statement of fact so much as an association – people just think of white potatoes and immediately picture bags of Lays and huge plates of French fries. Since these foods are so obviously associated with obesity and poor health, they can create a kind of knee-jerk negative reaction to all white potatoes.

In part, this idea might also be a reflection of class. White potatoes have traditionally been the food of the poor (remember the Irish potato famine?), and even today, they’re considerably less expensive than the sweet versions. Poor people throughout history who had to rely on white potatoes as a staple food and didn’t get enough fat-soluble nutrients in animal foods probably were unhealthy, so the potatoes get associated with malnourishment.

The problem with both of these arguments is that they don’t apply to white potatoes prepared in a non-junk-food way, in the context of a healthy diet. Other Paleo-friendly foods can also be ingredients in junk (think of butter on movie theater popcorn, or coconut flakes in macaroons), but that doesn’t make them unhealthy. And the nutrient deficiencies of a potato-centric diet are due to the lack of quality animal foods, not the presence of the potatoes. As long as the potatoes aren’t pushing other nutrients off your plate, they won’t cause poor health by themselves. 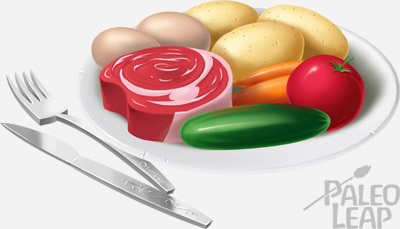 Perhaps we’re also conditioned to associate colorful foods with health, but this judgment is equally invalid: what about cauliflower? Or onions? Is coconut unhealthy because it’s white? White flour and white rice deserve this label to some extent, but these foods are white because they’ve been processed and their outer hulls removed (and in the case of white rice, this is actually a benefit, because it removes the toxins as well). Potatoes, like cauliflower, onions, and coconut, are naturally white, so the color doesn’t say anything about their health value.

White potatoes are real food. They’re not any less healthy than sweet potatoes – in fact, they’re even a complete protein, which is hard to get outside animal foods. If a reasonable amount of starch fits into your Paleo eating plan and makes you feel energetic and vibrant, there’s nothing wrong with mixing up your potato intake to include some white varieties as well. Try some pesto mashed potatoes or fish cakes to pair your potatoes with some healthy fats and protein, or simply slice them into thick home fries and roast them in the oven with some rosemary and coconut oil – yum!