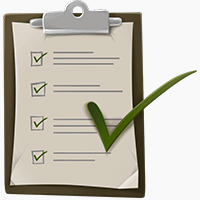 One of the most common questions we get from Paleo beginners is some variation of “am I doing it right?” So here’s a handy checklist to help you figure it out for yourself, designed to pinpoint some of the most common beginner mistakes and misunderstandings.

The checklist is designed for people who have already been trying to eat Paleo for at least a few days. If you’ve never heard of Paleo before, the quick version is here. Take a look, try it out, and save this checklist for a week or so.

If the above statements sound like you, then congratulations, you’re successfully avoiding “health food” that isn’t actually Paleo. You haven’t gotten caught in the trap of foods people think are Paleo for some reason, even though they actually aren’t. It might sound a little ridiculous, but so many people try to eat Paleo without really understanding what it involves, and seriously compromise their results.

If the above statements don’t describe you, then you’re probably not quite clear on what Paleo actually is. You’ll get much better results if you really understand the diet, so here’s a basic guide to get you started.

Your plate should look like this: meat, lots of vegetables, and some sweet potato fries (or another starch) if you like them.

If the above statements sound like you, then congratulations, you’re following the spirit of Paleo, not just the letter. A very common beginner mistake is trying to re-create their old diet with foods that are technically Paleo. But Paleo was never meant to be about re-creating junk food with nut flours. If your plate is predominantly filled with meat and vegetables, you’re doing it right!

If the above statements don’t sound like you, then you might be trying to re-create your old diet with technically Paleo foods. This isn’t great, because it doesn’t help you make new habits or re-imagine what a “meal” actually looks like. Save the Paleo baking for occasional treats, and focus on vegetables and meat for the bulk of your meals.

*It’s normal to see a slight dip in performance at the very beginning, and it’s not necessarily a sign of anything wrong. It’s just your body getting used to the transition. If it continues past 2 weeks or so, something might be up.

If the above statements don’t sound like you, then one or more of three things could be wrong.

These are all three incredibly common for beginners, so don’t feel bad at all. Paleo food is much less energy-dense than junk food, so you’ll need to eat a larger volume to get enough energy into you. Add fat, carbs, or just more food, as appropriate.

If the above statements sound like you, then congratulations, you can check off managing your stress. Chronic stress is a huge health problem, and it can sabotage the most dedicated efforts to lose weight or get healthy. Stress management is part of Paleo just as much as eating the right things!

If you were laughing through that list thinking “As if! I wish!” then you probably already know you’re stressed – and you probably also know how bad it is for you. Without getting preachy and annoying about it, this is just another reminder to either take steps to deal with that, or adjust your goals and expectations to account for it.

If the above statements sound like you, then congratulations, you can check off sustainability! Paleo isn’t a two-week “diet;” it’s a lifestyle change for the long run – but nobody is going to stick with something that forces them to be miserable or takes over their life. The statements above were designed to see whether or not what you’re doing is likely to be sustainable in the long run.

If that doesn’t sound like you, then it sounds like Paleo is taking up way too much of your life to be sustainable in the long term. Depending on specifically what you’re having trouble with, you might find some of these articles helpful:

Are these the only things a Paleo beginner might possibly be getting wrong? Of course not! But they’re some of the most common – and most likely to cause serious problems down the line. If you checked out OK on all five, chances are you’ve got the basics down pretty well, and you can focus on fine-tuning and tweaking, instead of worrying about the big picture.