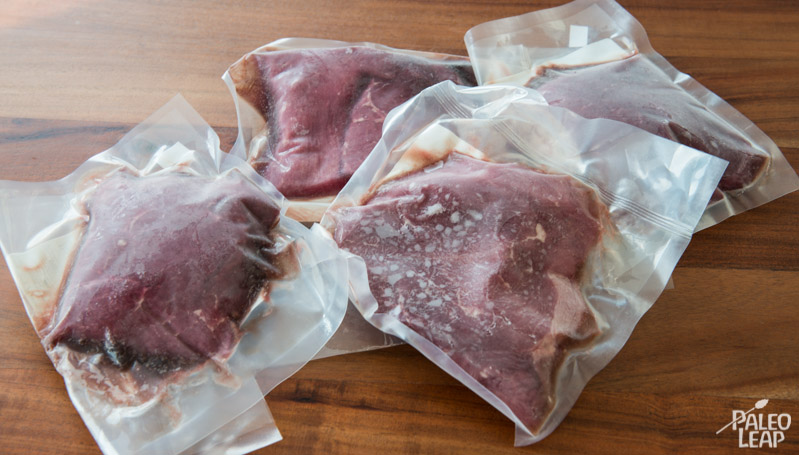 Let’s not kid ourselves; one of the nicest things about Paleo is the fact that we can eat unlimited amounts of meat. Red meat, fatty meat, anything will do as long as it has been fed and treated properly. Like so many others following the conventional wisdom way of thinking, I used to think that high quantities of fatty red meat would cause a quantity of problems later in life.

I’ve now learned better and know that meat and fat are not what’s causing all the diseases we’re burdened with today or else how would we’ve thrived for millions of years as a species eating mostly game meat and vegetables.

Now, I think conventional wisdom has moved us so far off red meat that we don’t know how to choose a good cut or how to prepare it anymore.

When starting out with Paleo, I was only agile with simple cuts of chicken and pork. I now know better and I’m not shy about buying cuts of meat that need roasting, stewing, poaching, braising or grilling. So many flavors are available to us, it’s a shame to eat the same things over and over again. 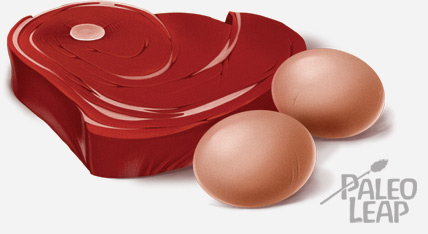 As a rule of thumb, the parts of an animal that move the most will require the longest and slowest cooking. Those will reward you though with a deep flavor and melt in the mouth meat when cooked properly. On pork, lamb or beef, those parts are usually the shins and the shoulders.

Try to choose your meat with the bone still in as the bone will render great flavor and nutrients when cooked slowly in a liquid with meat attached to it. If you grill or roast meat with the bone, you can then use those bones to make delicious stock.

How to choose great meat from your butcher

When choosing meat at your butcher’s, other than how it was fed (choose naturally fed and grass fed) or treated (choose free-range and antibiotic free), look at the meat your buying and look for cuts that look dry, have a deep red to purplish color and are marbled with fat with an extra creamy fat layer on top. Of course, with pork or chicken, it won’t be marbled, but good cuts of pork should have a good layer of fat on the exterior (except for lean cuts like the tenderloin). The more fat a cut of meat has, the more moisture it will hold when cooked. You’ll want to choose meat that looks dry because wet meat often hasn’t been hung long enough and will lose most of its juices in the cooking process. Hanging an animal makes the muscle fibers break down and the meat gets more tender.

For almost all cooking methods, it’s best to have your meat at room temperature before cooking it so it cooks faster and more evenly. Also, most cooking temperatures given in recipes are based on room temperature cuts of meat, so you’ll have more accurate results if you start this way.

Great method for tender cuts of meat like racks of lamb, pork loin, poultry or beef ribs, rump and sirloin roasts. You basically put your meat in a hot oven (about 425 F) for the first 15 minutes and then lower the temperature to around 350 F for the rest of the cooking process making sure to baste the meat from time to time. Tender red meat can be underdone to your taste, but chicken and pork should be well cooked through.

Basically the same method as roasting, but with an oven at a lower 300 F to 325 F and for a longer period of time. This method is very well suited for cuts that are a bit too tough for regular roasting like lamb and pork shoulder and pork belly.

A method that is suitable for the same cuts of meat as slow-roasting. You brown your meat in a pot on all sides (this helps keep the juices inside the meat) and then put the pot with the meat in the oven to roast and add a liquid like stock halfway through the cooking process. You can also add red wine in place of the stock if you allow it in your diet. You can baste the meat with the liquid as often as you want.

A bit like pot-roasting, but for tender cuts of meat and without a liquid. This method is well-suited for cuts that are tender, but are still too thick to simply fry like a steak. You brown the meat on all sides in a pan and then put it in the oven for the rest of the cooking process.

Those two methods are probably the most used methods and are well suited for all kinds of tender cuts of meat like chicken breasts, steaks, chops, ribs and tenderloins.

For frying, you heat up a pan to a medium-high heat and then put some kind of healthy fat (coconut oil, ghee or other animal saturated fat that won’t burn) on the meat or in the pan and cook the meat while turning every now and then until cooked through.

For stir-frying, you cut your tender piece of meat in thin slices and put them in a sizzling hot wok with a fat that’s heat resistant, and then stir nonstop until your meat is cooked.

What’s better than grilling a tender piece of meat during the summer time outside on the grill with friends and family? Simply sear your meat on the hot part of the grill and then let the rest of the cooking process happen on a medium-hot part of the grill. Make sure your piece of meat is well browned before turning so it doesn’t stick and turn it with tongs so the meat doesn’t get pierced which would make the juices run out of the meat.

A good way to cook tender meat like fish and chicken, poaching will also produce a delicious stock that can be used for the sauce that will go with the final dish. You can poach whole chickens and whole fishes and the rule is to have a tight lid that will cook even the parts that are outside the liquid with the steam it produces. Keep the temperatures low and make sure that the liquid is no more than simmering.

This method is used for tougher cuts of meat like shoulders, shins or beef brisket and will produce a very flavorful and tender end product when done properly. Simply put your meat and a liquid like stock or water on the stove top, in the oven or in a crock-pot. Add tough vegetables (onions, carrots and celery are a good aromatic combination), herbs and spices and let cook at a low temperature until the meat is fork tender.

With braising, you usually use a whole cut of meat instead of having it cut in small pieces and you don’t cover the meat entirely with the liquid, letting the steam between the lid and the liquid do to rest.

I hope this article gave you ideas and insights and that you’ll try new cuts of meat and ways to cook them over the coming weeks.