It’s still a staple of the much-vaunted “Mediterranean Diet.” It’s the original “healthy fat.” And in this case, the goods actually live up to the hype: olive oil is an incredibly healthy food and deserves pride of place in your kitchen.

This week, we’ll cover the potential health benefits of olive oil; check back next week for a guide to choosing a high-quality oil, and the lowdown on whether or not you can actually cook with it. 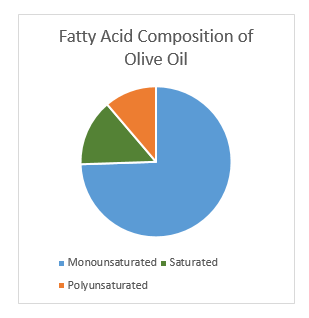 Olive oil is 100% fat, but not all fat is created equal: whether it’s good or bad for you depends on what type of fat it is.

The exact fatty acid composition of olive oil depends on the type of olive tree, the time of harvest, and the processing method. It’s a natural product, and olive trees don’t produce fruit in accordance with factory specifications! But the graph on the right shows a reasonably accurate average. Olive oil is primarily monounsaturated fat (MUFA), with a little bit of saturated (SFA) and polyunsaturated (PUFA) along for the ride.

That’s a very healthy fat profile. Saturated and monounsaturated fat are both Paleo-approved and very good for you. It’s true that polyunsaturated fat is inflammatory and unhealthy in large amounts, but the small amount in olive oil just isn’t anything to worry about.

To put that into perspective, take a look at how olive oil stacks up next to some other Paleo fats: 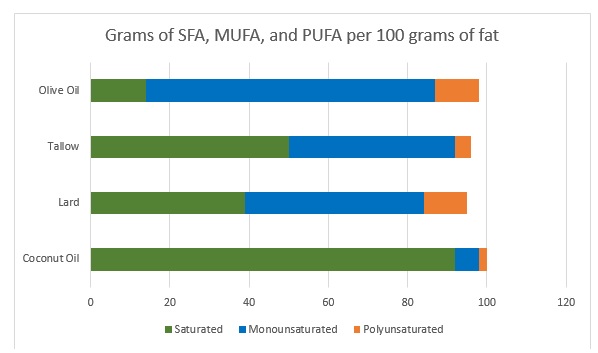 (because of a few other minor types of fat, the numbers don’t add up to exactly 100 in all cases)

Comparatively, olive oil has the most monounsaturated fat by a huge margin. It can’t compete with coconut oil in the saturated fat department, but it also has approximately as much PUFA as other healthy Paleo cooking fats. It's not better or worse overall; it just has the different types of healthy fat in slightly different proportions.

Olive Oil: Beyond the Fats

The fatty acid composition of olive oil would make it a perfectly healthy fat to include from a Paleo perspective. But the fat composition alone doesn’t cover all of its claims to fame.

Aside from the fats it contains, olive oil also contains two important fat-soluble nutrients: Vitamins E and K. One tablespoon of olive oil contains approximately 10% of the recommended daily value of each of these – and while the RDA is pretty imprecise, hitting the 10% mark is still a sign that there’s a nutritionally significant quantity of vitamins in there.

So far, things are looking pretty good for the ancient Greeks: plenty of healthy fat with some vitamins along for the ride. But as you probably know, olive oil has more than just vitamins and fats: it’s also famous for its polyphenols, antioxidants that have been studied for every conceivable illness from aging to depression to obesity.

Olive oil contains at least 30 different phenolic compounds. As well as their ability to reduce oxidative stress in the human body, these phenols also protect the polyunsaturated fat in the olive oil and prevent it from oxidizing. This is critical from a Paleo perspective, since it’s oxidation that really makes a fat dangerous. The reason why we avoid PUFA is its tendency to oxidize, but under the protection of the antioxidants in the olive oil, this is much less of an issue.

So far, you know that olive oil should be healthy – based on the numbers, it seems like a healthy food. But the proof is in the pudding: if it doesn’t actually produce health benefits in real human beings, all the numbers on paper are just a bunch of talk.

To collect this evidence, we’ll need to look for two main things:

So, what does the evidence say in human trials?

This is the one everyone knows about: olive oil is “heart-healthy monounsaturated fat!” And in fact, it’s true: in human trials with a realistic consumption, olive oil did improve cardiac risk markers.

Another hypothetical benefit of olive oil is its power to reduce inflammation. One of the many polyphenols in olive oil is called oleocanthal – it’s the reason why a really good olive oil stings a little in the back of your throat. It’s also a powerful medicinal compound that you may have taken before…in ibuprofen or another anti-inflammatory.

There’s a catch, though: to get the benefits you need to eat a lot of olive oil. Getting the adult dose of ibuprofen, for example, would take 35 tablespoons of olive oil! Also, this effect has only been studied in test tubes, never in actual human subjects.

On the other hand, this study found that markers of blood cell inflammation were lower after a meal containing olive oil polyphenols, whether they were given as part of the oil itself, or artificially added to sunflower oil. So it seems like there’s room to be cautiously optimistic about the benefits – at least it can’t hurt!

In a surprising but exciting benefit that you probably weren’t looking for in a cooking oil, the polyphenols in olive oil may also help influence the composition of the gut flora. That’s because most of them pass right on through the small intestine into the large intestine (where most of the “good bugs” live). Some types of polyphenols encourage beneficial bacteria to grow; others may work their cardioprotective magic via an intermediate effect on the microbiome.

This is so new and experimental that there haven’t been any real human trials on this yet, but this article has a very interesting overview of the theories.

As well as everything listed above, praises of olive oil typically include an “everything but the kitchen sink” list of benefits spanning almost every conceivable disease.

Plenty of correlations exist between olive oil and a lower risk of cancer, Alzheimer’s, obesity, diabetes, and heart disease. But correlations don't prove cause and effect. Think about it: who eats olive oil? People who care about their health. Those people are also likely to do all kinds of other things like exercising regularly and eating more fruits and vegetables – you can’t just look at the association and assume that olive oil specifically is the cause.

That doesn’t mean that olive oil is necessarily useless for these diseases. In fact, since it’s so good for overall health, it might very well have an effect on cancer or diabetes. But just be aware that you need something more than a correlation to prove that for sure!

Sounds pretty good, on the whole! But wait, there’s more: you won’t get all these benefits from any random bottle you pick up at the dollar store. Come back next week for the practical side of buying and cooking with olive oil, including: