Ask most people to start naming vegetables, and seaweed will come pretty far down the list, if it appears at all. But just like fish and other animals from the sea, seaweed has some health benefits that are hard to get from foods that grow on land – and don’t just assume that it’s going to be weird or gross. Simmered into a savory broth or baked into crispy snacking sheets, it actually tastes pretty delicious!

To skip to the new addition about where to find good seaweed, click here.

Botanically, seaweed is divided up by color into three groups: red, green, and brown. (although confusingly enough, this classification doesn’t always match perfectly with the color of the vegetable on your plate). Within each of the three groups, there are quite a few different kinds of edible seaweed. Some of the most common are:

Of course, there are many more edible species of seaweed, but most of them are quite difficult to find outside specialized or ethnic grocery stores. The four listed above are a little easier to find, and represent a wide variety of potential ways to cook and eat sea vegetables.

Asia (low dairy consumption but low rates of osteoporosis) vs. the United States (high dairy consumption but high rates of osteoporosis) is everyone’s favorite demographic comparison when they’re trying to explain how giving up dairy won’t actually make your bones disintegrate on the spot. It is a great illustration that we don’t necessarily need dairy to be healthy, but it doesn’t actually prove that we don’t need calcium, because the traditional Asian diet includes another fantastic source of calcium: seaweed.

Compared to other green vegetables, seaweed is a clear winner, with the relative amount depending on the color. The most calcium-rich type of seaweed is hijiki (not one of the four most common varieties above), which contains 1,400 milligrams of calcium per 100 grams (3.5 ounces). Compare that to whole milk, at 113mg per 100 grams. For reference, the RDA for an adult is 1,000 mg. Hijiki, raises some health concerns because it often contains small amounts of inorganic arsenic, but this isn’t a major concern unless you eat a lot of it every day.

If you can’t get hijiki seaweed or don’t feel comfortable with the arsenic risk, other types have plenty of calcium as well. Dried seaweed averages 4-7% calcium by weight, which means that one gram of dried seaweed would include 40-70 mg of calcium. To get the RDA of approximately 1,000mg, you’d only need 14-25 grams (around ½ to 1 ounce, or 1 to 2 tablespoons) of dried seaweed a day – easy enough to toss into a bowl of soup or sprinkle over any seafood dish for extra flavor.

Since it contains much more water than dried seaweed, fresh seaweed will obviously have a lower calcium content by weight. Fresh seaweed contains approximately 170 mg of calcium per 100 grams, to get the RDA of calcium exclusively from fresh seaweed, you’d need around 588 grams (a little over 7 cups). Very few people are going to want that much seaweed salad, but then again, very few people need to meet their calcium requirements exclusively with fresh seaweed. Combined with other Paleo calcium sources, like bone-in fish and dark green vegetables, fresh seaweed is an interesting and healthy addition to your routine.

Another health benefit of seaweed is its iodine content. Iodine is primarily important for thyroid health: without iodine, the thyroid can’t coordinate the body’s hormonal systems properly, which leads to all kinds of systemic hormonal issues, especially in the reproductive system. It’s also crucial during pregnancy – if the mother is iodine deficient, the baby can be born mentally retarded.

Like all other seafood, sea vegetables are extremely high in iodine, one of the few nutrients that a Paleo diet sometimes lacks. Any fruits and vegetables grown in iodine-rich soil will contain this essential mineral, but soils throughout the world are becoming increasingly iodine-depleted, so depending on where your produce is from, it may not contain as much as it should. In most developed countries, table salt is fortified with iodine to prevent deficiency, but just quitting processed foods will take a lot of salt out of your diet, and if you switch to sea salt at the same time, your intake of iodine could dip dangerously low.

Seaweed, by contrast, is such an excellent source of iodine that it’s hard not to go over the RDA if you eat any amount of it. Kelp is the highest in iodine, with nori being slightly lower. Iodine varies even within each species, depending on where and when the plant grew, but just one gram of dried seaweed usually provides 1-2 times the RDA of iodine.

In fact, some seaweeds contain so much iodine that they can actually be dangerous, especially for people with pre-existing thyroid issues. Most healthy people’s bodies can adapt to a wide range of iodine intakes, but it’s definitely best to start low and work your way up, rather than diving right into a huge bowl of seaweed salad with every meal. 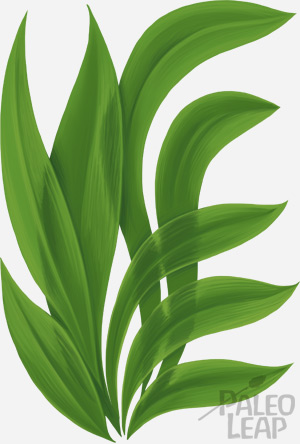 On top of its calcium and iodine content, seaweed also has several other health benefits. It doesn’t have a lot of fat, but what it does have is mostly Omega-3s – wakame is especially high in omega-3 fats. It’s also a source of high-quality protein, although again, the protein content is fairly minimal so relying on seaweed as a staple source of protein would require eating a really ridiculous amount.

Many seaweeds, especially dulse, are also excellent sources of iron. And recent research into seaweed has revealed yet another upside: a class of carbohydrates called fucoidans, which are anti-inflammatory and may have anti-cancer properties. While it’s too early in the game to claim any kind of seaweed as an anticarcinogenic superfood, the benefits of fucoidans are quite promising, especially against breast cancer and leukemia.

How to Eat Seaweed

No, it doesn’t have to be slimy! The texture is what really makes people reluctant to even try seaweed, but you don’t ever have to slurp down a bowl of seaweed noodles to enjoy the health benefits.

A favorite snack food in Asia is thin sheets of dried seaweed: they’re crispy like chips, but with a salty, seafood taste. You can find these at higher-end grocery stores and ethnic markets. The only real danger with the pre-prepared kind is the frying oil (often peanut or canola), but the SeaSnax brand is made exclusively with olive oil, and the ingredients are so pure it’s even Whole30 approved! Another alternative is to make your own with coconut oil, olive oil, or whatever other cooking fat you like (bacon-flavored seaweed, anyone?)

Nori is usually the type of seaweed that’s used for the crispy snacks, but it can also function as a wrap for sushi or any other central ingredients. If you’re missing the convenience of a wrap to grab at lunchtime, try throwing some roasted cauliflower, shrimp, and broccoli into a nori wrap and enjoy!

Missing the satisfying slurp of chicken noodle soup on a cold day? Seaweed soup might be your answer – you can toss seaweed noodles into a big bowl of bone broth with some vegetables and spices for the perfect snack, or add a little meat for a rich and nutritious meal. It’s the best kind of comfort food for someone who’s been sick and vomiting, because not only is it easy on the stomach, but it’s also very hydrating, full of electrolytes, and rich in essential nutrients.

You can also use some brands of kelp noodles as an alternative to regular noodles in pasta or stir-fry dishes, but be warned that they don’t exactly replicate the texture of pasta made with wheat – they’re a little chewier and springier.

Cold seaweed salad is a less popular choice, maybe because most of us just aren’t used to eating our noodles refrigerated. But if you like it, seaweed salad can be a delicious side dish for any kind of Asian-inspired recipe; you can make it spicy or not, depending on your taste.

With kombu, you don’t even have to eat the seaweed itself; you can throw it into a pot of broth for flavor and nutrients, and then remove it when the broth is finished cooking. Try adding it to soup as well, especially any kind of Asian-inspired seafood soup.

A different way to get the health benefits of seaweed without changing the texture of whatever you’re eating it with is to sprinkle your food with dulse flakes instead of salt. These flakes have a mild fish flavor (so they work best with seafood dishes) and work in the recipe just like any other kind of spice.

Seaweeds might not be the prettiest greens around, but they more than make up for it in nutrition. The only real danger is for people with any kind of thyroid problem – in that case, talk to your doctor before you start eating anything so high in iodine. Otherwise, head out to the nearest Chinatown, grab yourself a bag (or two) of those strangely addictive crunchy nori sheets, and enjoy snacking on chips that are actually good for you!

New Addition: Where to Buy Seaweed

After this article was posted, several readers on Facebook were lamenting their difficulties in finding a brand of seaweed that isn’t full of nasty additives like wheat and soy, or grown in contaminated waters off the coast of China. It’s definitely an adventure finding good food in the modern supermarket! Here are some specific brands and products to get you started on your search: