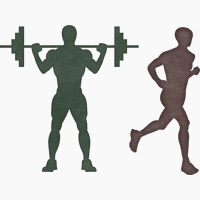 First of all, the benefits of exercise don’t come from burning a lot of extra calories. That’s not how it works. Exercise is helpful for weight loss, but not because it burns calories, so “eating it all back” doesn’t matter. (Here’s more on that). But even on top of that, the idea that “you just get hungrier and eat it all back” is way more complicated than most people think. Here are 4 things you should know about that…

One thing that almost all studies can agree on is that during and immediately after a workout, most people feel less hungry. This review is free to read and goes over all the evidence, including appetite hormone levels, the role of low-energy-density foods (e.g. eating vegetables instead of potato chips), the difference between people who habitually exercise and people who don’t, and other relevant problems. To quote:

“most studies using exercise-trained individuals have shown a suppressive effect of exercise on appetite.”

In the short term, exercise lowers levels of hunger hormones and decreases subjective feelings of hunger. This is probably caused by the effect of exercise on appetite hormones, but depending on the type of exercise, dehydration and gut disturbance might also be going on (e.g. some runners get upset stomachs if they eat too soon after running). There was some quibbling back and forth in the studies about specifically what type of exercise causes the most dramatic effect, but overall, it was clear that exercise decreased appetite immediately after the workout.

This review found exactly the same thing and included even more studies since it wasn’t focusing only on people who exercised regularly. This review suggested that the more intense the exercise, the greater the effect.

But here’s the catch: the “postexercise” period in these studies lasted 1-2 hours after the workout. So assuming you do a 1-hour workout, and then eat less in the next 1-2 hours, what about the other 21 hours of your day? That’s where things get complicated.

2. In the Long Term, Results Will Almost Certainly Vary

In the long term, the effect of exercise on appetite and food intake actually depends on who you are – results are totally different for different people. To quote this study:

“longer term exercise is characterized by a highly variable response in eating behaviour…Marked differences in hunger and energy intake exist between those who are capable of tolerating periods of exercise-induced energy deficit, and those who are not. Exercise-induced weight loss can increase the orexigenic [orexigenic = feeling hungry] drive in the fasted state, but for some this is offset by improved postprandial satiety signalling [“postprandial satiety signalling” = feeling full after a meal].

Is this how your body will respond to exercise? Who knows!

So in other words, some people exercise and feel hungrier, but then after they eat, they feel fuller even after eating less food. These are two totally opposite effects, and they interact with each other in different ways.

So the people who confidently inform you that “exercise just makes you hungry” – maybe it does, for them. And if exercise works that way for you, then you might want to account for that in your weight-loss plans, although it’s worth repeating that exercise doesn’t work by burning calories anyway. But if you actually study people in a systematic way, it’s very clear that it doesn’t work that way for everyone.

3. Studies on Women are Few and Far Between

Here’s a quote from a recent study:

“The majority of exercise and appetite regulation studies have been conducted in males. Consequently, opportunities to examine sex-based differences have been limited”

This study was published on September 21, 2016. Unless there’s been a sudden deluge of exercise-and-appetite studies on women in the past month, that’s still true, and it makes examining the effects of exercise on appetite in women very difficult. You could just assume that women will react the same way as men, but that’s a very dubious assumption – there’s not much to recommend it but convenience. On the other hand, if there are differences between men and women, nobody’s really sure what those differences are or what might account for them, much less how to design a diet and exercise program that takes advantage of them.

The limited evidence we have suggests that there’s not a huge difference, but the evidence base is so small that there could be something big hiding in plain sight. As the study puts it, “Future well-controlled acute and chronic exercise studies directly comparing men and women are required to expand this evidence base.”

4. Many Studies are Totally Unreliable

Can you remember every single thing you ate for the past week? Every snack? The exact portion size of everything on your plate? Almost nobody can do it – and yet, that’s the kind of diet record that long-term studies of food intake are often based on. Obviously, this kind of record-keeping is going to be imprecise, whether people mean to be inaccurate or not.

Also, remember from up above that everyone is a special snowflake? This review pointed out that a lot of studies on exercise and weight loss just take the average numbers and ignore the individual variation. For example, imagine that Mary and Ted both start running. Mary loses 10 pounds because she doesn’t overeat to compensate and Ted gains 5 pounds because he gets so hungry that he overcompensates with his food. The average of -10 and +5 is -2.5, so the study might report that “runners lost an average of 2.5 pounds,” even though nobody actually lost 2.5 pounds. You can work around this by looking for the range of the results, but that takes effort and more space than most headlines have to work with.

Does exercise “just make you hungrier?” Well, it depends. The only thing any of us can do at this point is to try it out individually and see. But it’s worth repeating that…