It’s true that healthy skin starts on the inside. But putting the right stuff on the outside can also have a big impact.

Cheap beauty products are harsh on your skin, and in some cases they can actually worsen the problem they’re supposed to solve (the most notorious case is harsh cleansers that strip away the natural oils in your skin, which only makes your skin produce even more oil in response). Some people also find that the artificial fragrances are irritating or just don’t smell good.

The good stuff isn't nearly as harsh or damaging, but it’s so expensive…unless you can just walk over to your kitchen counter and grab it!

Virgin coconut oil is one of the best things you can put on your skin. It has healing benefits, it can act as a weak sunscreen, it’s a great moisturizer, and it’s incredibly versatile; you can use this stuff for almost anything.

In this study, the researchers intentionally gave identical wounds to different groups of rats. They treated some of the rats by putting virgin coconut oil on the wounds, and left the other rats alone. At the end of the study, the coconut oil made the wounds heal much faster. The coconut oil rats had more collagen cross-linking and greater antioxidant activity in their skin. Treated wounds also had lower levels of inflammatory oxidized fats. The researchers credited “the cumulative effect of various biologically active minor components” in the oil.

That’s very cool, especially for people with diabetes, who tend to have slower wound healing times.  But the specific nature of the healing benefits (collagen and antioxidants) suggests that it might also help heal sun damage and generic age-related damage – that’s definitely something all of us could use a boost on.

2. It’s a Gentle but Powerful Moisturizer

Water is the worst thing you could put on your skin if you want to moisturize it. Try it yourself: splash some water on your face, let it dry, 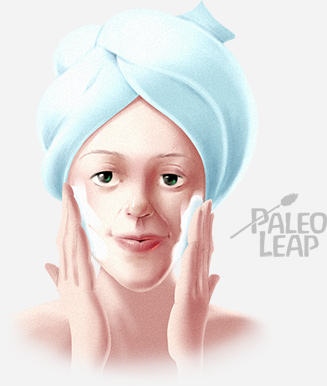 and notice how the skin feels tighter as the water dries out. Now pick up a commercial moisturizer and check the first ingredient: it’s probably water. It might feel good at first, but the benefit doesn’t last very long.

Coconut oil is precisely 0% water, so it doesn’t have this problem. Instead, it actually helps keep moisture in your skin by reducing water loss. And it’s incredibly gentle: it’s even safe to use on preterm babies with low birth weight. Talk about delicate skin!

Coconut oil does feel greasy when it first goes on – start with a very small amount, and maybe start on someplace that isn’t your face so you can get used to the correct amount to use on a less visible area. It’s great for dry elbows!

(By the way, the same thing is true about hair: everyone’s hair is sleek and smooth when it’s wet, but as it dries out, it can get frizzy. But If you leave it unwashed long enough for your scalp to produce a significant amount of oil, then the hair around your head will de-frizz. Coconut oil can replicate that without having to leave your hair unwashed and gross; just rub a little bit on the ends.)

And about the problem of clogging pores: if you start looking, you’ll find claims both that coconut oil does clog pores and that it doesn’t clog pores. Claims that it does clog pores are based on studies done on rabbits’ ears, which is how people used to test cosmetic products. But more recent studies have shown that human skin often reacts differently from rabbit skin. Some substances – like mineral oil – that cause acne in rabbits might be totally harmless in humans.

So is coconut oil among those falsely accused substances? It’s not clear yet. For now, it might be safest to play it by ear: if coconut oil makes your acne worse, stop using it. If it helps, keep using it.

4. It can Help with Eczema/Atopic Dermatitis

Eczema, or atopic dermatitis, is a skin disease that causes itchy, red skin and a painful rash. It’s especially common in children, but adults can also get it. Coconut oil is very effective as a moisturizer for people with atopic dermatitis; here’s a study showing that it works.

You can use this stuff for almost anything – it’s a very versatile multi-tasker.

Low-Effort (use right out of the jar)

Here is a writeup by one woman who tried it as a replacement for everything from eye cream to makeup remover to shaving cream – it’s powerful stuff!

You can also buy all kinds of commercially formulated coconut oil products, but check the ingredients carefully if you’re worried about potential allergens or irritants!

It’s cheap, it’s easy to use, and you can use it for all kinds of stuff! What’s your favorite way to use coconut oil? Let us know on Facebook or Twitter!