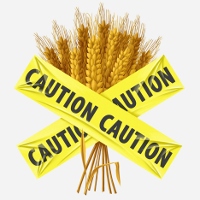 “Sweet potatoes are better than white potatoes because they have a lower glycemic index.”

“Agave is better than sugar because it has a lower glycemic index.”

You’ve probably read stuff like this, but do you actually know what the glycemic index is or why exactly it’s better to have a low one? Glycemic index is a very rough estimation of how much the carbs in a food will spike blood sugar, but if you take a close look, it’s more complicated than low-GI = good.

1. The Glycemic Index Doesn’t Account for Different Amounts of Carbs in Different Foods.

Think of any food that contains carbohydrates. That includes…

Now imagine you could take out just the carbohydrates (including fiber) from any one of these foods: get rid of all the water, any protein and fat, and all the other stuff until you just have just the carbs. For each food, you’d have a slightly different mixture of different types of carbohydrates: glucose, fructose, sucrose, other sugars, and fiber.

Here’s the glycemic index of a few common foods:

There’s a big problem with this, though: the comparison is based on the assumption that you’ll be eating the same amount of carbohydrates from all the different food sources, and that’s just not how people eat. To get the amount of carbohydrates (30 grams) in two slices of white bread, you’d have to eat 5 cups of broccoli. It’s easy to imagine eating two slices of bread, but who eats 5 cups of broccoli in one sitting?

In other words, the glycemic index doesn’t account for the serving sizes people actually eat.

2. It Only Measures One Food at a Time

The GI of this meal will not be the same as the GI of the spinach!

The GI of a food doesn’t measure how the food affects blood sugar when eaten in combination with other foods, or as part of a recipe that includes many different ingredients. How many times have you eaten nothing but boiled potatoes for dinner? What about only raw or steamed broccoli? Probably not – in real life, humans eat their carbs with protein and fat.

3. It Doesn’t Measure Insulin Spikes From Sources Other Than Carbs.

The whole point of glycemic index is to measure how much a food spikes blood sugar. For a lot of people, especially people with diabetes or another metabolic problem, blood sugar is important because it demands an insulin spike to bring it back down. The real problem is the insulin; blood sugar is just a proxy measurement.

In general, fructose has a lower GI than glucose, because fructose gets sent to your liver to metabolize before it gets into your blood, so it doesn’t raise blood sugar as quickly. But this isn’t an advantage! A high-fructose diet puts a lot of strain on your liver and can cause serious liver problems down the line.

If you only looked at GI, you’d never know that, and you might think that high-fructose foods are the healthiest foods around. For example, judging from GI alone, you might think agave nectar is a fantastic sweetener because it has a low GI. But actually, the high amount of fructose makes agave nectar a pretty lousy sweetener: if you’re going to use a sweetener at all, honey would be a better choice even though the GI is higher.

5. It’s Not a Great Tool for Weight Loss

If you have any faith in the power of hormones to regulate weight loss, the glycemic index seems very promising. A lot of junk food tends to be high-GI, so a low-GI diet excludes things like Wonderbread and white rice and other blood-sugar-spiking carbs. Wouldn’t that help people lose weight?

Well, not really. This review found that low-GI diets weren’t more effective than any other type of diet for weight loss. Replacing sugar with agave nectar: not actually the way to easy weight loss!

Diets that get rid of junk food typically do help people lose weight, but GI is only a very rough guide for that. Remember that a low-GI diet would allow Peanut M&Ms (GI: 33) but exclude watermelon (GI: 72) – this definitely isn’t a perfect system for telling whole foods from junk! If you want to eliminate junk food, just eliminate junk food without getting muddled up in GI.

Here’s a comparison between glycemic index and glycemic load for the foods from above:

That’s a little bit better, but it’s still not perfect – it’s still based on only one food at a time, it still doesn’t measure anything but carbs, and it still makes it easy to (falsely) assume that fructose is better than glucose. And some studies (like this one) have found that a low-GL diet is just as unimpressive as a low-GI diet when it comes to losing weight.

If only we could come up with one number that would classify every food as “healthy” or “unhealthy.” Imagine how easy everything would be!

But that number doesn’t exist, and it’s definitely not the GI.

The glycemic index of a food gives you one piece of information about that food. Looking at it in the context of potential food toxins, nutrient density, antinutrients, and other factors might help you make a decision about whether or not that food is right for you, and if so in what amount and when. But just looking at that one number in isolation can lead you down some very silly paths – like preferring agave nectar to honey.

Glycemic Index isn’t “bad” as a measurement – it can be very helpful to some people. But it’s only one number, and it’s important to know what it does and doesn’t mean.