Some brave souls are four-season outdoor runners (or bikers, or walkers) in every imaginable weather – they would rather head out into rain, snow, and all the gross varieties of freezing sleet in between than be trapped on a treadmill. If you’re one of those people, more power to you: working out in the cold may even have some small benefits for fat loss, and it certainly does give you bragging rights.

With winter heading in for North America and Europe, those road warriors are about to start breaking out the balaclavas and thermal leggings. But not everyone is thrilled at the idea of heading out for an outdoor workout when the weather gets uncomfortably cold - or uncomfortably hot, for that matter. Some people don’t have a safe place to do that even if they wanted to. Some people just don’t like being that public about it.

All of those are perfectly good reasons for working out inside, but they don’t change the problem of gym boredom – what do you do about that rat-on-an-exercise-wheel feeling of being inside all the time? Whether it’s too hot, too cold, or you just don’t want to head outside for your workout, here are 7 ways to perk up indoor workouts.

If you thought this was just a game for kids, think again: jumping rope is actually a pretty intense form of conditioning even if you don’t have a chance of ever doing a double under. It’s a full-body exercise that demands a lot in terms of coordination and balance, and you can easily make it harder by using a jump rope with weighted handles or wearing ankle weights.

For some quick conditioning, try starting with 20 jumps followed by 20 seconds of rest, repeated until you’re too tired to jump 20 times in a row. Then slowly increase the number of jumps and/or decrease the seconds of rest until you get something really challenging.

2. Try Rowing if you’re Sick of the Treadmill

The treadmill, the elliptical machine, and the stationary bike are the big three when it comes to cardio machines. A few people also go for stair climbers, but in many gyms, the rowing machines just sit there neglected.

Rowing is a nice break, and it’s great for overall cardio; depending on how hard you were going on the other machines, it might very well be more challenging for the same amount of time (meaning you get the equivalent workout faster, meaning you spend less time in the gym!). And if you're really looking to get in and out, you can do HIIT intervals on it.

3. Give Yourself a Day Off

It sounds counterintuitive, but sometimes if you’re looking for ways to get yourself motivated in the gym again, the solution is as simple as a day off. Lack of motivation can sometimes be simple fatigue: taking a day off gives your body a rest, so you’ll get a chance to recover and head into your next workout feeling fully energized instead of beat up. It also gives you a psychological break, which can be just as important.

This is not a day that you took off because you were "bad;" it's a planned part of your recovery and long-term strategy. Refuse to feel guilty. Schedule something for that time that you enjoy but otherwise wouldn’t have time to do, whether it’s making a date for yourself with a long bubble bath or exploring a new part of town. You’ll give yourself some time to miss the gym, and be ready to head back refreshed and re-energized.

This one is also counterintuitive. If you’re already bored, how is adding more restrictions and limitations going to help solve the problem?

A lot of people aren’t bored because their gym doesn’t have a variety of exercises. They’re bored because they’re stuck in a rut of using only a tiny percentage of what the gym has to offer. This is the person who walks past the entire free weight section of the gym, the kettlebells, resistance bands, boxes, and other equipment to the treadmill, and then spends an hour on the treadmill every single day.

This is where limits come in: restriction forces creativity. Whatever exercise you’re sick of doing, ban yourself from it for a week, but go to the gym and challenge yourself to work up a sweat anyway. After a week, you can go back to doing whatever you limited - unless you found something you like better!

Medicine balls (the weighted ones, not the huge inflated bouncy ones) are great for those workouts that double as a way to get out your aggression or frustration after a long day. You can literally spend your workout throwing things at the wall and slamming them on the floor!

This isn’t just cathartic; it’s also an opportunity to do types of movement that aren’t really targeted by traditional strength exercises, especially different types of rotation. Rotational slams and throws challenge core stability and also get you moving from left to right, which isn't really part of most exercises: if you think about big power lifts like the squat, bench press, and deadlift, they're all moving forwards and backwards relative to your body, and/or up and down from floor to ceiling. So are most forms of cardio like running and biking. Going left to right is a different challenge.

If you don’t know the Olympic lifts, they’re the really impressive ones where the bar starts on the floor, magic happens, and it ends up 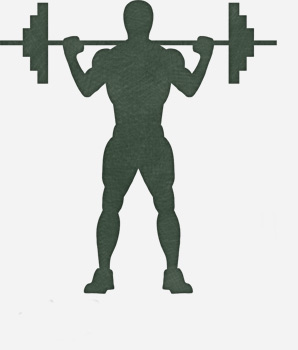 above the athlete’s head. Except it’s not really magic; it’s training, and you can do it too. Olympic weightlifting competition tests athletes in the snatch and the clean and jerk, but there are all kinds of variations of these lifts (or parts of them). Here’s a list with explanations.

An experienced coach or trainer can teach you to do these safely and with good form, and for people who like them, they’re a lot of fun – it feels very athletic and just plain cool to send the weight flying up into the air like that.

You might also hate them. That’s OK, too; at least you’ve found one thing that doesn’t work.

7. Look Outside the Gym

“Indoor workout” and “gym” are not synonyms. Have you tried…

All are indoors, but they give you a break from the typical environment and maybe even the chance to make a new friend or two.

Again, if you're happy to exercise outside in all weather, that's great! If you've never tried it, it's worth at least an experiment or three to see if you'll like it. But if you're stuck in a gym that looks exactly the same every day, there are still plenty of ways to add some interest and variety to your workouts.

How do you spice things up when you're in a gym-workout rut? Let us know on Facebook or Twitter!