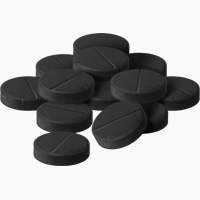 It doesn’t really sound like something you’d think to eat. Charcoal? Why would anyone put that in their mouth?

As a matter of fact, though, you’re already using charcoal as a purifier: it’s in most air and water filters. Even ordinary charcoal mops up impurities at an astonishing rate, and activated charcoal is like regular charcoal turned up to 11. It starts out as regular charcoal. Then it’s processed with oxygen to make it very porous (full of tiny holes) and give it a huge surface area. The large surface area means that even a very small amount of activated charcoal can pick up a whole lot of other stuff on its surface. Basically, it works kind of like a sponge for all kinds of things – that’s why it’s so useful in air and water filters.

But the question remains: will it do the same thing inside your body? After all, you can also filter water by running it through sand, but nobody would suggest eating sand as a way to detox! Just because something works outside the body does not necessarily mean it will work inside the body. So take a look at the evidence we have about activated charcoal and whether or not it will really do you any good.

Claims about the health benefits of taking it as a medicine generally focus on three benefits:

Activated charcoal has a long history of use as a poison control drug (taken directly after poisoning as a form of damage control). It works by adsorbing the drug in the digestive tract. ADsorption (no, that wasn’t a typo!) is not quite the same thing as ABsorption, but it’s a similar process. Basically, the charcoal steals all the drug for itself, so your body doesn’t get any. For nutrients, this would be very bad, but for toxins, it’s great, because you don’t want to get any of them.

There’s some truth to this, and if you ever are in the hospital with an acute case of drug overdose, you might end up getting a dose of activated charcoal to help your body clear it. For example, it’s great when people take too many painkillers. But this review of the evidence offers some very important points to bear in mind:

In the 1980s and 90s, activated charcoal got a lot of press for reducing cholesterol. Unfortunately, every other study seems to contradict the one before it:

The lesson: there’s a little more evidence on the “pro” than the “con” side, but it’s far from conclusive and most of the trials have been very small (for example, the 1989 study used just seven subjects: that’s not enough to be anything more than preliminary.

The studies on whether activated charcoal helps with gas and bloating are almost hypnotically regular:

No, those are not cherry-picked specifically to make a pattern: it’s really that unclear.

The lesson: nobody knows! It may or may not do anything. It’s unlikely to do you any harm (none of the studies reported worse symptoms after taking the charcoal), but it’s also quite likely to do nothing at all.

What Are the Risks?

With any potential supplement, it’s important to look at the risks, not just the benefits. And while activated charcoal is generally safe for most people, it has some important downsides to consider:

Most people do also get black stools after taking charcoal, but this is not dangerous, just a little strange-looking.

Ultimately 90% of the “benefits” of activated charcoal are imaginary. Specifically, it will not help you “detox” from anything but an acute poison ingestion. It will not help your body flush out any “accumulated toxins” from heavy metal exposure, pesticide residues, food preservatives, dyes and colorings, or anything else (not to mention that you don’t need anything to help you flush those out, since your liver already does it for you).

There’s also conflicting evidence for digestive benefits and for cholesterol lowering. Some studies say yea; others say nay. Unfortunately, because the studies on activated charcoal are so conflicting, it’s easy for people to cherry-pick what they want to hear, and just throw around the ones in favor, ignoring all the evidence to the contrary. But now that you have the big picture, you can see that this is not the whole story!

The bottom line: forget about it. Activated charcoal is just not worth your money. If you have acute poisoning bad enough to need it, you’ll be in the hospital anyway – and if you don’t, there’s no evidence that it does any good.