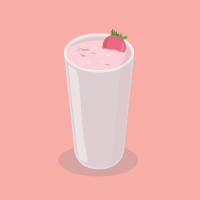 “Liquid calories” should be pretty self-explanatory, but just in case, what we’re talking about here is any source of calories that doesn’t come from solid food. That includes Coke and other soft drinks, protein shakes, fruit juice, etc. Technically, alcoholic drinks also have a lot of calories, but alcohol is a bit of a special case, so we’ll leave that out for now.

There’s some truth to this: calories do matter for weight loss. Before you close the tab in disgust, that still doesn’t mean calorie-counting is a good strategy. For most people, direct calorie-counting is actually terrible strategy, partly because there are an enormous number of factors in calorie balance besides food and exercise. (There’s no space to go into the details here, but check out here and here if you’re interested). But the fact remains that calorie balance still does ultimately determine weight loss.

Since calories matter, but calorie-counting rarely works in the long term, strategies that automatically reduce calories without conscious effort are pretty much the holy grail. So what’s wrong with the advice to avoid liquid calories?

What most studies show is that the benefits or drawbacks of liquid calories have more to do with how people eat them and less to do with anything inherent to consuming energy in liquid form. Liquid calories can slow weight loss if…

These are the real problems with satiety, not necessarily the liquid format. In fact, if none of the above apply, strategic use of liquid calories can actually be helpful to weight loss. Here’s a look at the studies.

It Depends on What Liquid Calories you’re Drinking

Protein, carbs, and fat have different effects on satiety (fullness). So if you want to compare solid vs. liquid food, you have to compare food with the same macronutrient values. You can’t compare chicken breast (solid food) to Coke (liquid food) because chicken breast is high in protein, low in fat, and totally lacking in carbs, while Coke is 100% carbs with nothing else.

A better comparison would be Coke vs. cookies: both are primarily carbs/sugar. That’s exactly what this study looked at. The researchers gave subjects 300 calories of sugary soda or 300 calories of fat-free cookies and then measured how much they ate at their next meal. There was no difference. So in other words, the Coke and the cookies were equally filling. Here’s another study finding basically the same thing. Either subjects got whole peaches with 750 mL of water to drink, or they got a peach smoothie made with the same amount of peaches but in liquid form. There was no different in appetite afterwards. The problem wasn’t the liquid; it was the sugar.

Or maybe you’re more interested in solid protein vs. liquid protein. This study looked at exactly that: 96 calories of protein as either liquid or gel snacks. Then the researchers measured how much the subjects ate at lunch. Again, there was no difference between the two. All of the protein groups ate less at lunch than people who didn’t get any protein, but there was no difference for solid vs. liquid protein.

The Power of Expectation

The soda is not the part of this meal that you would expect to make you feel full.

On the other hand, not every study has actually found that solid and liquid foods affect hunger to exactly the same degree. Some studies found an advantage to solid foods. This study tried to make sense out of the conflict by looking at another variable: expectation. If you get tested on a glass of Coke vs. a pile of cookies, you probably have some expectations about which one will make you feel full, and those expectations will influence how full you actually feel. So the researchers wanted to take expectation out of the equation and see how people felt when they were basically eating nutrient goop instead of recognizable foods.

The researchers gave people food with the same amount of calories but in either liquid or solid form. They tested both conditions (liquid and solid) with calories from either protein or carbs. The solid foods were basically Jello, and all the liquid foods seemed like plain water.

In the end, they concluded that with unfamiliar foods, the macronutrient composition was more important than the solid or liquid form. So in other words, people might find solid foods more filling in some studies because they expect to find them filling. The effect is real, but it’s about how we eat foods, not the foods themselves.

This style of liquid calorie intake is a prime culprit for weight gain. So in practice, most people see great results from eliminating liquid calories because it’s an easy way to get rid of a lot of non-satiating, nutrient-poor junk. You eliminate a lot of sugar calories from your diet without feeling hungrier (since they weren’t making you feel full in the first place) and you don’t cut out anything actually nutritious. Win-win!

That’s why studies like this one and this one find that replacing soda calories with water helps with weight loss.

On the other hand, some kinds of liquid calories don’t have all the problems above. For example…

The bottom line: choose your liquid calories carefully. A good rule of thumb is to eliminate them and then add back in only the ones you can justify as nutritious (e.g. soup) or otherwise helping you meet your goals. It’s not that liquid calories are automatically bad; it’s just that they require some careful pruning to make sure they’re really helping you.