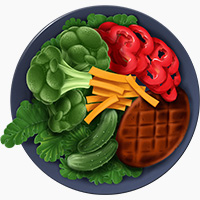 If you’ve been looking into Paleo for any length of time, you’re probably familiar with a basic plate template that looks something like this:

It’s a very basic template, and it’s repeated all over the place with minor adaptations. Some people throw in a little more or less starch; other people add dairy foods like cheese and yogurt; other people restrict specific vegetables or other types of foods. But the basic concept of filling a large amount of plate space with vegetables and then adding smaller amounts of protein and fat is popular for a very simple reason: it works.

But why does it work? Because it very nicely balances calorie density and nutritional quality in a way that lets you lose weight by listening to your own hunger signals, not by counting calories.

In a very limited and mathematical sense, calories ultimately determine weight gain and loss. But that doesn’t make calorie-counting a good weight-loss strategy, partly because calories in and calories out aren’t completely under your control.

For example, “calories in” depends on how many calories your digestive system absorbs from the food you eat. You can change that indirectly through modifying your gut flora, but as soon as you start talking about food quality and effects on the gut flora, you’ve already proven how incomplete the idea of “just eat less and move more” is.

More relevantly, calorie-counting doesn’t work because it’s a bizarre way to approach food, nobody can do it with any accuracy anyway, and it actually raises the level of stress hormones that make it harder to lose weight.

So please don’t take any of this as an argument either that what you eat is the only factor determining calories in (it isn’t) or that calorie-counting is normal human eating behavior (it isn’t). But with that clear, calories that you eat account for a large fraction of your total calories in, and most successful weight-loss eating plans will involve some way of reducing them. The problem is reducing them without (a) having to count them, or (b) being hungry all the time.

Calorie density is how many calories a food contains for a given amount of that food. Here’s a chart showing the calorie densities of some common foods:

Some of the 1-cup numbers are a little rough, but the point is that different foods have very different calorie contents for the same amount of weight and bulk.

That’s important because the physical presence of a lot of food in your stomach helps to send the “I’m full” signal to your brain. Technically, this is called gastric distention. Your stomach stretches when you eat a meal, and when it stretches a certain amount, most people stop wanting more food not because they’ve counted up the calories, but because it’s just unpleasant to eat any more. But this is about the physical space the food takes up in your stomach, not how many calories it has. If you eat a cup of peanut M&Ms or a cup of baked potatoes, the amount of gastric distention will be roughly the same, but the M&Ms supply almost 10 times as many calories.

If you replace calorie-dense foods with the same physical amount of vegetables, you’ll end up with a net reduction in calories for the same amount of food displacement in your stomach, which achieves our two goals: reducing calories (a) without having to count them, and (b) without being hungry all the time.

But Meat and Fat are Calorie-Dense!

A lot of rich animal foods are also really nutritious – don’t cut them out of your diet just because they’re more calorie-dense than vegetables!

From all of the above, you might think that the way to go for weight loss would be eating only vegetables – they’re the least calorie-dense foods around. But that’s actually a bad plan. Most importantly, calories aren’t evil; humans do need some of them to survive, and unlike gorillas, our large intestines aren’t efficient enough at extracting fat from fiber to let us eat only vegetables for our calorie needs.

If you ate only vegetables, you’d also miss out on a lot of really important nutrients found only or mostly in animal foods – a lot of calorie-dense animal foods are also very nourishing. Vegetables are nutritious, but they don’t give you everything.

And eating only low-calorie-density vegetables isn’t even ideal from a hunger perspective. In the short term, you can fill up on vegetables, but in the long term, fullness signals don’t come only from the physical bulk of food in your stomach. If you’ve ever been really, honestly, stomach-hungry and tried to “fill up” on a huge pile of salad vegetables with no dressing, and then eaten to the point where you were kind of bloated but still felt hungry, then you’ve experienced this firsthand. (If you’ve never done that and don’t understand why anyone would, then congratulations: you’ve dodged one of the bullets of crash dieting).

Fat is an important regulator of fullness for several different reasons, and it works even better when combined with fiber. Protein is also important. And at least one theory of obesity holds that certain nutrients are also necessary for fullness – that is, if you’re deficient in nutrients, your body will keep making you hungry in order to get all its nutrient needs met, even if that means you overshoot your calorie needs. You could theoretically die from complications of severe obesity, but you’ll die from scurvy (Vitamin C deficiency) a whole lot faster.

The problem with super-calorie dense modern foods isn’t that they contain calories – you need calories to live. The problem is that junk food provides calories out of proportion to its appetite-suppressing power. (In fact, it’s been deliberately designed to do that, to make you eat more of it, because that’s profitable to the companies that make it). If you eat enough to hit the “food bulk” signals, you’ve probably overshot your caloric needs, but if you eat to your calorie needs, you won’t ever hit the physical amount of food most people need to stop feeling hungry. So your choices are either obesity or thinness, but with calorie restriction and hunger.

A meal based on the Paleo plate – with most of the plate space taken up by vegetables, but most of the calories from animal foods and fats – automatically gives you the best of both worlds:

Of course, you can easily recreate the problems of junk foods with foods that are technically Paleo. This is the “nut-based granola for breakfast, Paleo cookie for a snack, almond-flour bread with sunbutter for lunch, Paleo brownie for dessert” model of completely missing the point. People who treat Paleo like this often struggle very hard to lose any weight on it – they might address other problems like gluten sensitivity or food allergies, but as a weight-loss diet, it’s not great.

That’s why the basic food template works so much better than Paleo recreations of grain-based foods. It’s a basic meal pattern that aligns with the signals your body is expecting to receive from food, so you can reduce overall calories in by manipulating calorie density, but keep the nutritional benefits of calorie-rich foods like fatty meats – and all without counting calories at all.