Breakfast: eat it or skip it? For a while, it was fashionable to call breakfast the most important meal of the day - apparently, if you even thought about skipping breakfast, you'd either waste away into nothing or instantly become obese, depending on whether it was your grandmother or your personal trainer talking. Then came the reaction: it suddenly got fashionable to skip breakfast completely. Apparently, only weaklings and the insulin-resistant need any food before 2 PM.

But what's fashionable in nutrition and what's actually good for humans are two different questions. So here are 5 things you should know about the eat /skip breakfast debate.

1. Association Studies Don't Prove Anything About Cause and Effect

This review looked at exactly that problem. The study found that most of the studies that people cite about breakfast and obesity are association studies. What you'd need to do to really prove an effect of breakfast on obesity are randomized controlled trials. A randomized controlled trial is when you give one group an intervention (e.g. skipping breakfast) and leave the other group alone and observe the differences between the groups. It's what you have to do to actually prove that the intervention causes some kind of change.

2. Some Studies Show No Effect.

Instead of giving people breakfast in a lab and making them eat it, the researchers in this study gave people instructions to eat or skip breakfast and then let them do it themselves in the real world. This is a much more realistic model of what happens when someone thinks "I'm going to start eating breakfast" or "I'm going to try skipping breakfast." Here's what the researchers found at the end of the study:

"A recommendation to eat or skip breakfast for weight loss was effective at changing self-reported breakfast eating habits, but contrary to widely espoused views this had no discernable effect on weight loss in free-living adults who were attempting to lose weight."

Over 90% of subjects in both groups did as they were told (at least according to their self-reported food intake), but it didn't seem to matter much.

This study took obese adults (age 21-60) and assigned them to either a breakfast group or a no-breakfast group for 6 weeks. They found that the group basically made no difference in weight loss:

Ultimately, there was no weight loss difference between the groups. (Although the breakfast group had slightly better insulin sensitivity at the end of the trial, which is nice for them).

This doesn't mean that skipping breakfast never works, but if studies sometimes show no effect at all, then the benefit of eating or skipping breakfast will probably be small or individually variable. Or the subjects could have been eating the wrong breakfast foods - maybe instead of breakfasts high in protein and fiber, they were all filling up bowls of sugary breakfast cereal.

3. "Breakfast" is Too Vague and Broad

This review looked at all the evidence about breakfast and weight management. The authors found that if you lump all "breakfast" into one category, there's not conclusive evidence for it or against it.

This makes a lot of sense: "breakfast" to one person might be two Krispy Kremes and a Red Bull in the car on the way to work, but "breakfast" to another person might be hard-boiled eggs with leftover sweet potato. Obviously, those two breakfasts are going to have totally different effects on the people who eat them, and lumping them together into one category of "breakfast" doesn't make much sense.

Instead, you have to look at who's eating the breakfast and what type of breakfast they're eating. Which brings us to...

To take an example study, this one found that obese Chinese teenagers at less at lunch if they had an egg breakfast compared to a bread breakfast. The researchers found that the egg breakfast increased levels of satiety ("I'm full") hormones like PYY, and proposed that the higher amount of protein in the eggs helped keep the teenagers feeling fuller than the bread.

5. Routine Matters...but Maybe Not the Way you Think 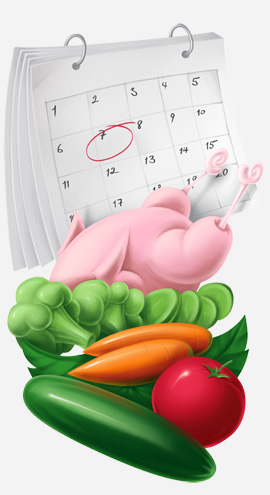 Another thing that the review mentioned: most studies on breakfast didn't control for whether the participants usually ate breakfast or not.

This study is from all the way back in 1992, but it's one of the few long intervention studies on breakfast eating vs. skipping, so it's well worth a look. So cast your mind back to the George H. W. Bush presidency and take a look at the results: 52 obese adult women were assigned to a breakfast group or a no-breakfast group.

Weird, right? But it makes a certain kind of sense: the change in breakfast habits shook up the women's routines and pulled them out of their old food habits first thing in the morning. Then they had the ability to start from scratch and build new habits on a blank slate instead of trying to resist the bad habits they'd already made.

So if you've always eaten breakfast and you want to change your whole diet, it might be worth trying to skip it - to bust yourself out of your routine if nothing else.

6. It Affects How Your Workouts Burn Fat

Now for an indirect effect of breakfast on weight loss: if you do morning workouts, you should be aware of the way breakfast affects your body's fuel utilization during your workout.

When you work out, your body can either burn carbs or fat. In general, if you've just eaten a lot of carbs (carb-heavy breakfast, Gatorade, most varieties of energy chews/gels/beans), your body will preferentially use those carbs. But if you haven't eaten carbs recently, or after you've burned through all your easily-available carbs (e.g. the middle of a long run), your body will switch to burning fat.

In theory, this means that working out before breakfast might be more effective for fat burning. But maybe keep an eye on your stress levels - if you're otherwise stressed (mentally or physically), then it might be helpful to eat something so your workout doesn't overwhelm your body with an extra burden of stress.

So What's the Takeaway?

The takeaway is that nobody can really say how "breakfast" as a catch-all category affects weight gain or loss in all humans.