It’s understandable: we’re all busy, and food seems like such an incredible time suck sometimes. Who has the time to actually sit down and eat a whole meal after you’ve already spent all the time cooking Paleo food from scratch? If you made time for a full breakfast, you’d have to get less sleep, and isn’t that bad, too? What's anyone supposed to do?

The problem everyone always talks about with eating on the run is what you’re eating: it’s the way “eating in the car” typically means “eating fast food in the car.” But even if you’re eating healthy food, cramming it down on the go isn’t ideal. So here’s the case for making it a priority to sit down and pay a little more attention to your food, at least at dinner time.

The first reason to sit down and eat calmly is that you’re much less likely to overeat.

On Paleo, the idea is that you don’t have to count calories because you’re not eating food that wreaks havoc on your hunger cues, so can just listen to your body to tell you when it’s full. But if you’re paying attention to your email while mechanically shoveling in food with the other hand, you’re not listening to your body at all. If you’re distracted, that feeling of “I’m full” doesn’t appear as quickly, and it isn’t as strong:

This study studied people eating in four situations: driving, watching TV, talking to other people, or just eating alone. Among their findings:

Given the same amount of food, the distracted subjects felt less full after eating.

This study also found that women who ate while playing a computer game didn’t feel as satisfied by their food as women who weren’t distracted. If the distracted hadn’t been given a set amount of food by the researchers, they probably would have eaten more than the non-distracted women in order to “feel full.”

This effect is especially true if the meal is also energy-dense (think: trail mix, guacamole, dried fruit, Paleo “bars” and treats). Eating in a hurry may also be independently associated with overeating, regardless of distraction.

This effect means that eating while distracted makes you much more likely to overeat, relative to your body’s actual needs. It takes more food to make you feel full, because the satiety signals have to shout over all the other noise in your brain before you can hear them. And you’re eating faster, so you eat more bites before that feeling of “I’m not hungry any longer” gets to your brain. Those natural signals that do away with the need to count calories are effectively gone.

This might be one reason that eating family dinners is strongly associated with protection against obesity for children and teenagers, especially when the relationships at the table are positive. Taking your time over a meal is very beneficial for your weight, compared to neglecting the food while you worry about something else.

Another problem with eating on the run is the type of foods most people turn to. And it’s not just junk food: even if you’re eating Paleo, you might still not be getting the best nutrition.

For the one thing, vegetables are a pain in the neck to speed-eat. They’re bulky, they’re hard to transport, they take a long time to eat, you often have to use utensils instead of your hands – if you’re looking for something to grab and go or eat in the car, vegetables aren’t great.

Accordingly, most people tend to skimp a lot on vegetables when they’re rushing through a meal – instead, they’ll turn to something like Paleo granola bars or trail mix. But using nuts like this as a staple food is not in the spirit of Paleo, even though it technically fits the letter. There’s not enough protein, too much Omega-6 fat, and again, nuts are very easy to overeat. 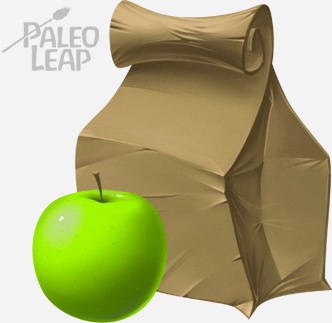 Stress is another reason why rushed meals aren’t great. Sit-down meals give us time to relax, slow down, and switch from “fight or flight” mode back to “rest and digest.” Taking time to relax at lunch can help prevent any morning stress from snowballing into a nightmare in the afternoon: you get a break and some perspective when you get back. Winding down at dinner can help you relax after anything that might have happened during the workday, so it doesn’t keep you up at night.

In other words, traditional meals help you manage the constant influx of stress that comes with the modern world – take them out, and you’ve done away with a major stress management tool.

That would be bad enough, but trying to eat while you’re in “fight or flight” mode also has negative consequences for digestion. High-stress “fight or flight” mode means that blood is directed away from your intestines and into your muscles, exactly the opposite of where you want it for digestion. If you’ve ever felt like the food "sits like a brick in your stomach" after eating when you’re really tense and stressed, that’s one reason why.

Cramming down meals on the go just isn’t ideal. It makes most people more likely to overeat, it’s stressful (which can really mess with digestion), and it tends to steer people towards less-healthy meals even if they’re eating Paleo food and not drive-thru. There are some ways to do damage control, like making an effort to pack fresh vegetables or manage how much you’re eating – and it’s absolutely better to do them than not. But the best is to sit down, eat calmly, and savor your food: it’s healthier, and it’s also much more pleasurable.