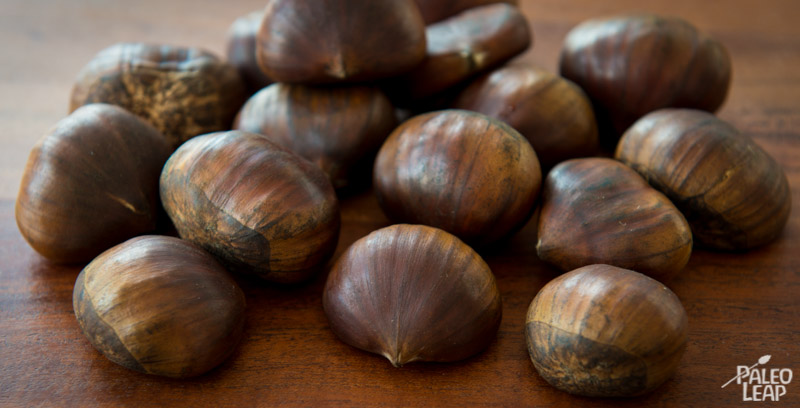 The Eat This series will introduce foods that are less popular or underappreciated in Western societies, yet are widely available, nutritious and taste great.

Discovering or rediscovering those foods is a great way to diversify your diet and bring pleasure in your everyday eating.

The first installment of this series will be about chestnuts.

Chestnuts are a true nut, compared to almonds and cashews, for example, which are in fact really a fruit. They are unrelated to water chestnuts, which are a tuber from an aquatic plant. There are multiple varieties of chestnuts, with the European and Asian varieties being the most popular ones.
Chestnuts are particular in that they are starchy, unlike most nuts, which are more often on the fatty side. In fact chestnuts are rather low in fat. They are a good natural carbohydrate option for those who like to eat a little more starch, but who want to stay in the Paleo boundaries and eat what’s available in nature. Sweet potatoes and yams are a good option but one can get fed up of eating them all the time. Chestnuts to the rescue!

Chestnut flour is probably a better idea than almond flour for baked goods because almond flour contains high amounts of fragile polyunsaturated fats that oxidize easily when in contact with a source of heat and that should be kept to a minimum on an healthy diet even if they are not oxidized.

They are popular in Italian cuisine and chestnut bread is common there. Keep in mind that as a source of starchy carbohydrate, some people will fair better without them, especially those trying to lose weight, and they are easy to overdo. Some people with digestive issues or a broken metabolism will probably fair better by avoiding starch altogether as well as all nuts.

For those who do enjoy moderate amounts of starchy vegetables though, chestnuts can be a wonderful addition.

Chestnuts are probably not what we would call a nutrition powerhouse, but they are still pretty high in manganese, vitamin C, vitamin B6 and copper. They are in fact the only nuts that contain appreciable levels of vitamin C.

In 100 grams of chestnuts you'll find 53 grams of carbohydrates. Of those 53 grams, 11 come from simple sugars, 5 from fiber and the remaining 37 grams is starch.

In those same 100 grams of chestnuts, you'll only get 2.2 grams of fat and 3 grams of protein.

You'll be pleased to learn that, like most nuts, chestnuts contain some levels of phytic acid which binds nutrients like calcium, iron and magnesium and makes them unavailable, but that the phytic acid content is pretty low in chestnuts. In fact, there is about 47mg/100g of phytic acid in chestnuts while you'll find 1,280mg/100g in almonds and 760mg/100g in walnuts, according to a 1987 review article.

In countries where chestnuts are popular, you'll often find street vendors selling freshly roasted chestnuts. If chestnuts are in season and are available at your local grocery store though, they are easy to roast and enjoy at home in the oven or around a campfire. They are normally in season from October to March. Here are the general roasting instructions:

If you decide to boil your chestnuts instead, place them in a pot of cold water, bring it to a boil and let simmer for about 15 to 25 minutes before draining them and peeling them with a sharp knife while they are sill hot.

Chestnuts are great on their own as a snack, in salads, in soups, as a garnishing for meat and fish dishes or in stuffing recipes. Poultry is excellent when enjoyed with a chestnut stuffing.