There are plenty of non-health-related reasons to eat the “odd bits” of the animal: organ meats, bones, skin, and miscellaneous parts that aren't chicken breasts or chuck roast. There’s the environmental argument (if we’re going to use up resources raising a cow to slaughter weight, why do we waste so much of the carcass?), the ethical argument (if an animal dies for you, you have an obligation to waste nothing), and yes, even the taste argument: once you find a recipe you love, offal is a discerning foodie’s delight.

Today, though, we’re going to focus just on the health benefits: the completely selfish reasons why you should eat more organ meats. Even if you don’t care about the environment, and even if you don’t really enjoy the taste, it’s still in your best interest to get some bones, organs, and other “odd bits” into your diet as part of a nutritionally complete diet.

First on the list is protein balance. All proteins are made up of amino acids, typically described as “building blocks.” Muscle meat and organ meats all contain several different amino acids, but here we’re mostly concerned with two of them:

To illustrate this, here’s a table showing the glycine content, methionine content, and glycine:methionine ratio of some common foods:

Most people today only muscle meat, with hardly any organ meat and bones and very little skin, so they eat a whole lot of methionine and not a lot of glycine.

This review goes into all the details about methionine and why you don’t want too much of it. Essentially, methionine restriction increases lifespan and improves metabolic health (body fat accumulation, insulin sensitivity, blood lipids, and all the related issues). This was mostly done in animal studies, but in human trials, a low-methionine diet also improved liver health and increased the rate of fat

So, do you need to quit eating all those methionine-rich muscle meats altogether? Not necessarily: here’s where glycine comes in. This is a simplification, but some research suggests that getting more glycine can help “balance out” methionine. In this study, for example, methionine restriction OR glycine supplementation increased lifespan.

The lesson: if you want to live longer and stay healthier while you’re at it, don’t neglect the odd bits, especially the gelatinous ones like bone broth, ears, tail, and skin. Human beings were not designed to get our animal protein just from the muscles. “High-quality” protein means eating the organs, bones, and skin, not just the steaks and chops! If you want to talk about a “balanced” or “well-rounded” diet, it better include all the important non-muscle proteins as well.

Are you sick of hearing liver described as “nature’s multivitamin” yet? Unfortunately, it’s probably going to keep the nickname, because it’s just so true! The second 100% selfish reason to eat more organ meats is probably a little more familiar: they’re almost unbelievably nutritious.

Here’s a chart of the nutrient content of four organ meats and three “normal” meats: 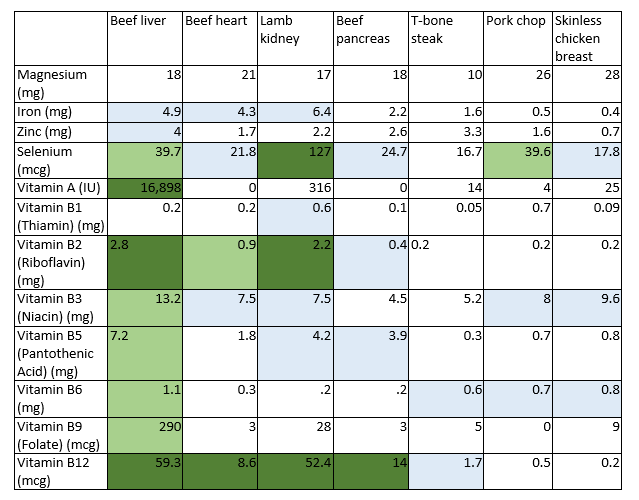 All values are given per 100 grams of raw meat (that’s about 3.5 ounces, not even a full serving for an adult). Values shaded in dark green are over 100% of the Daily Value for that nutrient. Values in light green are over 50%; values shaded in blue are over 25%. If you made a bar graph for all this data, you’d barely be able to read the values for anything else, because the “Vitamin A” column for liver would be so far off the chart.

In other words: eat your organs! They’re good for you!

This is the big health-related question most people have about organ meats, especially liver. The liver is often described as a “filter” for the body, which brings up mental images of the filter on your air-conditioner, encrusted with all the charming gunk and impurities that it’s keeping out of your lungs.

But cows are not air conditioners. A cow’s liver doesn’t “filter” toxins by trapping them within the liver and keeping them there, the way the filter on an air conditioner does. Instead, it gets rid of them by shunting them out into urine and feces: making sure they get out of the body. The toxins don’t stay in the liver, and the liver itself is perfectly safe to eat.

If you’re eating liver from cows that have lived under extremely toxic conditions, then the liver may accumulate toxins just like the rest of the cow, because the job of excreting it all is just too difficult. But in that case, the entire animal is dangerous to eat, not just the liver. If the rest of the meat is safe, the liver is safe, too. Especially if you're eating meat from truly grass-fed animals, the liver is just fine.

In most cultures, nobody would even dream of throwing away all of an animal’s organs, bones, and skin. And this isn’t just a foreign tradition or restricted to “primitive” cultures: just look at vintage American cookbooks to find endless recipes for liver, heart, tripe, and sausages featuring every imaginable part of an animal.

It’s time to get back to that way of eating, not just because it’s less wasteful, but because it’s much healthier. “Odd bits” provide important micronutrients and proteins that are hard to get anywhere else – they’re an essential part of a complete human diet.

Need some recipe inspiration? Try a quick batch of liver pâté: it really tones down the taste, and it’s fantastic with carrot sticks or pepper strips…or just straight from the spoon!