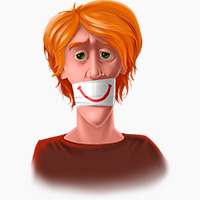 -Margaret Thatcher in The Iron Lady

That’s a huge stumbling block for so many people. For every person stepping up to bat and turning their life around, there’s someone else out there thinking “I can’t do this. I’m overweight. I’ve been overweight my whole life. I’m just not a healthy person.” Those thoughts create a whole identity around being sick and overweight. And once fall into that identity, it’s almost impossible to act differently: it just isn’t you.

But you can change that identity, from the inside out. Start acting and talking like the person you want to become, and you’ll start thinking like that person. And once you change the way you think about behavior, and the behavior itself will follow.

One of the most common questions from people who are just starting out is “can I have __________?”. Can I have gluten-free bread? Can I have stevia? Can I have coconut sugar? Can I have apple juice?

Well, here’s the ultimate answer for every single one of those questions: yes.

Yes, you can have any of these things. You can have gluten-free bread – or even regular, gluten-loaded bread, if you want it – all you have to do is go to the store. That’s the magic of the industrial food system: it’s all right there at your fingertips. Even if you make the commitment to eat Paleo, there is no all-powerful Healthy Food God reaching down to smack the Twinkie out of your hand. You’re an adult; you can eat pretty much anything you want.

So why do so many of us refuse unhealthy food by saying “I can’t have that”?

That might sound like just splitting hairs – after all, you’re really just using “I can’t have that” as a kind of shorthand for “I’m choosing not to eat that, because I know it’s not good for me in the long run.” You know that you could eat it, but you also know it’s not healthy for you, so you’ve decided that you won’t. So does it really matter what words you use?

Yes. The way you talk to other people – and the way you talk to yourself – about your life choices is incredibly significant. A study from the Journal of Consumer Research found that just saying “I can’t” vs. “I don’t” actually made an enormous difference in the subjects’ everyday lives. Dieters who were coached to say “I can’t” struggled more with food cravings and felt more deprived when they tried to resist unhealthy food, while dieters who were coached to say “I don’t” felt happier with their choices, and were more likely to stick with it in the long term.

That’s because “I can’t” means deprivation. It means you’d like to eat whatever it is, but you’re not allowed. And every parent of a 5-year-old knows that the fastest way to make something irresistible is to make it forbidden. When you say “I can’t have cake,” you’re setting yourself up as a passive victim of the big mean Paleo Diet Dictator, and that’s a miserable way to live. It’s no surprise that people have a hard time sticking to a diet when they talk about it like that.

On the other hand, “I don’t” is a statement of power. Every time you say “I don’t eat junk,” you’re claiming the power to define your identity as a healthy person. Just by saying the words, or even just by thinking them, you’re putting yourself in charge of your own life. It’s empowering. And human beings like power: it makes us feel good. You’re a lot more likely to stick with that positive, empowered feeling than the unhappy deprived feeling of “I can’t.”

You can use this for everything. “I don’t eat junk food.” “I don’t skip the gym.” “I don’t drink soda.” Whatever you want to change in your life, start by mentally reframing yourself as the kind of person who does/doesn’t do whatever it is.

But Isn’t That Lying?

What if you don’t really believe that you are that kind of person? If you caved in to the chocolate-chip cookies last night when you were stressed, is it really truthful to say “I don’t eat cookies” the next morning? Or maybe you really do feel deprived, and you’re tired of all this positive-attitude woo woo trying to convince you to just think happy thoughts. Sometimes you might feel like a total imposter, or just a liar when you say “I don’t.”

Here’s the thing, though: by saying it, you’re making it true. This has actually been well-documented as a psychological phenomenon. “Faking it ‘till you make it” creates a kind of positive feedback loop, and your words and behavior can actually change your thought patterns. The same is true for confidence and social skills: if you ask someone to act confident, even if it feels forced at first, then they’ll start actually feeling confident after a while. Even if they’re totally acting and inside they’re absolutely terrified, the acting still helps. One study found that body language does this too; for example, just crossing your arms can help you be more persistent.

This power to re-shape your own thought processes is huge. It means that it doesn’t matter if you “aren’t a healthy person,” because you always have the power to make yourself into one. You get to decide what kind of person you want to be: you just have to start playing the role, and eventually you’ll become the character.

There are all kinds of benefits to framing your decisions this way – benefits that go way beyond what you put in your mouth.

First of all, “I don’t” actually introduces a lot of positive energy to the environment. When you calmly and confidently assert your own identity, it’s a lot more attractive to other people than the woe-is-me attitude of “I can’t.” Everyone respects people who take control of their own lives, and when you say “I don’t” instead of “I can’t,” you’re putting yourself in that category.

It also frees you up from the self-centered spiral of feeling deprived and unhappy. When you spend a family dinner focusing on how unhappy you are because you “can’t have” lasagna, you’re not really there to enjoy the evening. It’s a double deprivation: not only are you feeling deprived because of your diet, but you’re also deprived of the love, companionship, and social interaction that you’d otherwise be getting. When you calmly decide that “I don’t eat lasagna,” then you get a double benefit: no more food deprivation and you can actually enjoy the company.

“I don’t” also leaves you a lot less open to people trying to persuade you otherwise. If you say “I can’t,” everyone knows you’re feeling deprived. And because they like you and want you to feel happy, they’ll try to persuade you that yes, you really can. They’ll try to give you “permission” to break your diet, thinking that it will help you relax and feel good. On the other hand, “I don’t” doesn’t leave you open to well-meaning justifications about “just this once” or “just a little bit.” You don’t. Full stop.

Despite all the benefits, shifting your thought patterns like this can be very frightening. If you’ve built your whole identity around being sick, if you’ve always experienced the world as a sick person, then being sick is part of who you are. Trying to change that identity is a huge leap of faith, and it’s absolutely terrifying. What’s going to be on the other side? Who will you even be, if you aren’t sick? Maybe you don’t like your identity right now, but at least it’s familiar, and that’s a kind of safety and comfort.

You can tell that this fear is holding you back if you start feeling a lot of resistance towards changing your habits, or you start stubbornly clinging to your “I can’t” statements. Maybe you’re saying something to yourself like “that won’t work for me – I’m too far gone to change myself just like that. It’s stupid.”

That kind of rejection is your lizard brain, clinging desperately to its old identity. See how “I’m too far gone” is a statement of identity, just like “I don’t…”? To your brain, new = scary, and the response is an all-out defense of all your comfortable, familiar habits and thought patterns.

Pushing past this kind of resistance is incredibly tough. The first step is to recognize that it’s going on, but it takes a lot of work even after that. Sometimes it takes several different tries. Sometimes it takes professional help, someone to work through the fear with you.

You can do it.

Do what you can to nourish the positive thoughts, but remember that it’s not the end of the world if you get stuck back in the trap of “I can’t” for a while. You have as many chances to succeed as you’re willing to give yourself. Maybe it has to be two steps forward, one step back all the way, but you’ll eventually make it there. You have got what it takes to make changes in your own life; you just have to believe it.