If gout runs in your family, you’ve probably heard the advice to pass on all the animal protein, which would make Paleo difficult at best. But actually, there’s more to the story: instead of blaming meat, we might want to take a hard look at sugar instead.

Gout is a very painful type of inflammatory arthritis. The best-known symptom is pain in the big toe, but gout can also cause pain in any other joint. Less commonly, it can even cause kidney stones or other completely different symptoms. These problems can show up in “attacks” separated by periods without pain, or they can be chronic and continuous.

Gout is more common in men than in women, but rates in both sexes have been steadily increasing for the last couple of decades.

Conventional wisdom holds that the best diet for preventing and treating gout is low in seafood and meat (especially organ meat), which sounds like it would pretty much take Paleo out of the running. But there’s actually more to the story than that…

First of all, it’s important to recognize that there actually is some support for the advice to cut down on meat and seafood. 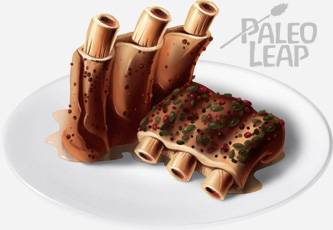 For one thing, there’s the problem of association. Gout is a classic “disease of civilization:” ever since it was first named and described, it’s been recognized as a problem for people who have plenty of luxury food. Until very recently, meat was a luxury food, so it’s not hard to see how eating a lot of meat looked like the cause of gout.

Unfortunately, there are a few inconvenient problems with this theory:

This suggests that maybe focusing on purines is looking in the wrong place.

Instead of blaming dietary purines, let’s briefly entertain an alternate hypothesis and see whether it fits the facts better. What about the connection between gout and sugar (fructose)?

Just like purines, fructose increases the production of uric acid. But it also does something else: it reduces excretion. In terms of raising total uric acid levels, this is much worse, because it also affects the ⅔ of uric acid produced by the body itself. As this study puts it: “hyperuricemia in gout is most commonly the result of relative urate underexcretion.”

If you’re producing more uric acid (from purines or anything else) but then just peeing it all out again, you won’t be sick at all. Total uric acid levels will only rise if you can’t excrete the uric acid that you produce. Purine-rich foods won’t do that, but fructose will.

Then there’s the other supporting evidence:

Gary Taubes actually printed an unpublished chapter from his book Good Calories, Bad Calories about this here, if you’re interested in a more in-depth take. But the short version: it’s very possible that fructose and alcohol, not purine-containing foods, are the real dietary culprits behind gout.

So with that said, what’s the Paleo recommendation for gout?

First and foremost, see a doctor. None of this is medical advice; it’s nothing but a set of suggestions to consider. Your doctor will be able to give you a much better opinion on what might and might not be right for you.

With that said, here are some suggestions based on what we know so far:

Again, none of this is intended as a substitute for a doctor. All the connections between food and gout are still tentative, and it’s possible that a diet low in meat will really help some people (whether it’s the purines or something else). But considering that so many people don’t get relief from dutifully cutting out purines (and that so many people do feel better eating a purine-rich Paleo diet), it’s also interesting to explore some other potential causes and therapies – and fructose looks like a very promising villain. At any rate, it’s not like reducing beer and sugar and eating more Vitamin C is ever going to hurt anyone, so at least it’s something to try!