Most people tend to assume that exercise is basically a limitless good. Training 3 times a week is healthy, but training 6 times a week must be healthier, right? The more, the better! And the more extreme, the better: it doesn't "count" unless you want to die at the end.

But quite a bit of research actually shows that the benefits of exercise start with less than you probably think, and peak earlier than you might assume: the 6-mile runner might not actually be much healthier than the 3-mile runner (although she probably isn't less healthy either). And there is a point when more exercise is actually detrimental to your health. 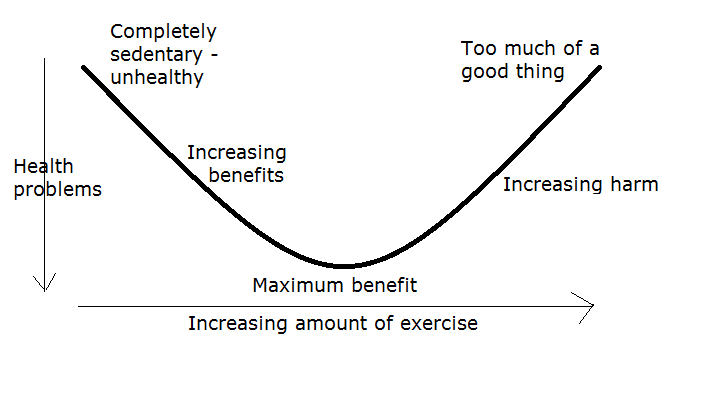 The U-shaped curve applies to all kinds of things. One obvious example is total calorie intake. Too few or too many calories can make you very sick (albeit in different ways); the benefit is in the middle of the curve where you have enough energy to do everything you want, without having a lot of extra fat to store. For another example, pick just about any vitamin or mineral. More is better up to a point, and then you start getting into overdose territory.

Applying the U-Shaped Curve to Exercise

One way to figure out how much it’s best to exercise is to apply this principle, bearing in mind that the “point” of maximum benefit will probably actually be a range of maximum benefit, and that it’s going to be different for everyone. Let’s take a look at the research and see…

What’s the Smallest Amount of Exercise with Noticeable Health Benefits?

For longevity, this study looked at over 400,000 people in Taiwan. Just 15 minutes of exercise every day reduced risk of all-cause mortality significantly compared to being sedentary. The researchers tried to control for things like sex, education, physically intensive jobs, drinking, smoking, and other confounding factors.

This doesn’t even have to be terribly intense either; it’s not like all these Taiwanese people were doing 15 minutes of Tabata sprints every day. A lot of evidence suggests that just walking has very real and significant health benefits.

What’s the Optimal Amount of Exercise for Maximum Health Benefits?

OK, so even a very nominal amount of movement can improve your health. But surely more is better right?

For cardiometabolic health specifically, in this study, researchers trained sedentary subjects for long-distance cardio events (9 marathoners, 1 triathlete, and 1 who did a 100-mile bike ride). The subjects steadily increased training volume over the entire year, but the benefits in blood pressure and other cardiometabolic parameters peaked at the volume they were doing around 3 months in (180-200 minutes per week, or 25-30 minutes per day) – after that, there were no substantial increases in benefits.

In the Taiwanese study, the researchers also found that the benefits curve started to flatten out at around 40-50 minutes of vigorous exercise or 90-100 minutes of low-intensity exercise per day.

This study of people living in Copenhagen found that the most healthful way to jog was 2-3 times per week, for 1-2.4 hours per week in total, at a slow pace – that would be an average of 30-60 minutes per day. People who jogged this way had better health than more strenuous joggers.

This research suggests that if you’re running for your health, the benefits peak 30 minutes to 1 hour of running. If you’re walking, the benefits peak at around an hour and a half. Beyond that, there isn’t much additional improvement in health (although there may be an improvement in your ability to win long-distance races, which is not actually the same thing as health). If you’re interested in more on running, here’s a TEDx talk.

“an evidence-based recommendation is that appreciably the same strength gains can be obtained by working each muscle once or, at the most twice per week. We would also urge both trainers and trainees, whatever their experience, to closely monitor progress in their workouts and investigate their optimal individual training frequency using any recommendations as merely a guide.”

That doesn’t necessarily mean you would only go to the gym once per week: if you’re doing a split routine, you might do arms on Monday, legs on Wednesday, and chest/back on Friday – each muscle group gets trained once per week, but you end up in the gym three times in total, which is a fairly typical program.

(The entire review is free full-text and worth a read if you’re also interested in questions like “how many reps/sets should I do” or “is it better to use free weights or machines?”)

Is There an Upper Limit?

If you really love running, the recommendations above might be unwelcome – what if you want to do more than that? What if it helps you

stay sane, or carve out some much-needed “me time”? What if you just plain like it and want to do it every day?

There’s some evidence that going to total extremes, especially with endurance exercise, isn’t healthy, but this simply isn’t applicable to most recreational fitness routines. Running marathons as a regular part of your workout routine isn’t healthy – but how many people actually do that? The risks of extreme endurance exercise often get generalized to totally normal workout schedules, without any real justification.

So where’s the point when exercise starts tipping over into the danger zone? Exercise stops being healthy when it exceeds your ability to recover. That number will be different for everyone – for example, someone who’s already stressed to the max at work and sleeping 6 hours a night has a lower ability to recover than someone on vacation who’s getting 8-9 hours every night.

One way to get a completely individualized assessment is to learn how to use HRV monitoring – instead of relying on generalizations based on study populations who may or may not be similar to you, just track your own body and see. Yes, it takes a little more time than reading a number from some study, but it'll ultimately be more useful.

If you’re just exercising for health purposes, studies suggest that you can get away with surprisingly little, provided it’s done consistently. Just a few minutes of moderate exercise every day is already enough to produce a significant improvement, and benefits actually peak at a few hours per week of combined cardio and resistance training. If you go for a jog twice a week and lift some reasonably heavy weights twice a week, you’d be pretty solidly in the middle of the optimal benefit range.

Once again, if you just like working out, or if you’re training for a particular event, there’s not much evidence of danger from a higher frequency within a reasonable range (chronic ultramarathon running does not count as “reasonable”). The point where the U-curve starts tipping back towards "too much of a good thing" depends a lot on the individual: individual measurements are likely to get you further than generalizations.