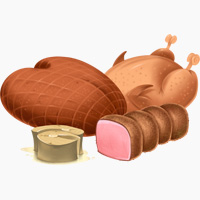 Paleo is heavy on the defense of animal fat: lard, butter, duck fat, and tallow are all Paleo-friendly traditional fats that make your food delicious as well as providing plenty of healthy fuel. But what about a closely-related target, animal protein?

Plenty of vegan groups like to claim that animal protein causes colon cancer (and/or obesity, heart disease, diabetes, kidney failure, early death…you name it, PETA thinks eating animals causes it.) But does that really hold up under scrutiny? Actually, if you look at the evidence from scientific studies instead of vegan blogs, the relationships between animal protein and chronic diseases start to look pretty tenuous.

Want the details? Here you go!

The Problem with Epidemiological Research

Proponents of vegan or vegetarian diets like to point to studies showing that intake of protein from animal foods is associated with colorectal cancer or various other diseases. This is called epidemiological research, and it’s interesting, but all it shows is association. Association doesn’t prove anything about causation. Just because two things happen at the same time doesn’t mean one caused the other. Burglary and ice cream sales both increase in the summer, but that doesn’t mean that eating ice cream causes burglary, or that burglary causes people to crave ice cream.

Just a few problems to consider with research finding associations between animal protein and diseases:

Is this meal really unhealthy because of the animal protein in the burger?

All of those are reasons to be skeptical about claims that animal protein “causes” anything. Pay close attention to the wording in the actual studies (as opposed to the newspaper headlines): “associated with” does NOT mean “causes”!

Evidence in Favor of Animal Protein

What’s more, there’s plenty of epidemiological research that shows no association between animal protein and cancer (or other diseases), and even some suggesting it may be beneficial.

Since cancer is one of the most common diseases that animal protein is supposed to “cause,” it’s worth a closer look. Some studies have found an association (remember: this is not proof of causation!) between animal protein and cancer, but others have found the opposite. For example, this study found no significant effect of total protein, animal protein, red meat, processed meat, poultry, and/or seafood on risk of renal cell cancer.

Other studies have strange and inconclusive results. This one, just for example, found that protein intake was associated with a higher risk of cancer until age 65, with a very slight bump in cancer risk from animal protein specifically. But after age 65, protein was associated with a lower risk. The authors’ explanation for this was a hormone called IGF-1, but the evidence for this is pretty shaky. Zoe Harcombe did a great job taking down the supposed “proof” in this study that protein caused cancer, diabetes, or anything else, and here is a great and very in-depth breakdown of why IGF-1 (the supposed link between animal protein and cancer in that study) doesn’t actually work like that.

A meta-analysis in 2009 found that: “the available epidemiologic evidence does not appear to support an independent association between animal fat intake or animal protein intake and colorectal cancer.” This 2013 review found “no statistically significant associations between total protein intake or LCHP [low-carb, high-protein] diets and cancer mortality…and the only study that also included protein sources found non-significant relations to animal- and vegetable-based protein.”

In other words, the association between animal protein and cancer isn’t even clear, and the only real explanation (IGF-1) isn’t very convincing.

OK, so what about animal protein causing diabetes? A higher intake of animal protein is associated with a higher risk of diabetes in several studies, but again, associations and causes are two different things.

This study controlled for some of the potential confounding factors by feeding people with Type 2 Diabetes two different types of meals for 6 weeks:

At the end of the study…

The study showed no advantage of a 100% plant-based diet compared to a diet containing animal protein.

Next up is a grab-bag: a few other diseases where even the epidemiological research agrees that there’s no real role for animal protein.

Animal protein: not actually such a demon nutrient. Really.

With all due respect to the vegans, there’s just no evidence that animal protein per se causes anything bad. There’s some epidemiological evidence that it’s associated with higher rates of certain problems, but there’s also a lot of epidemiological evidence showing that it’s not actually associated with those exact same problems, and in any case, association proves nothing about causation.

The chronic problem of separating “animal protein” from animal foods in general begs the question of why you would care about separating “animal protein” from whole foods like steak, considering that almost nobody eats animal protein except in the context of an actual food. That’s a great question – ask the people who keep accusing “animal protein” specifically of causing so many horrible diseases. Maybe once we get past the fixation on “animal protein” as the cause of everything wrong in the world, we can do some more interesting studies on overall lifestyle patterns – like comparing a Paleo-style diet rich in red meat to a Standard American diet with the same amount of red meat, to see whether the supposed health risks still hold up. Now that would be some interesting research!