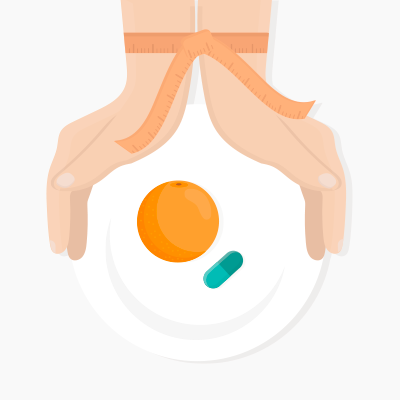 As nice as it is to see Paleo getting increasing amounts of press in mainstream news media, it’s incredibly frustrating that the publicity always has to come along with the constant description of “a fad diet called Paleo.” It’s easy to understand why people do this (dismissing Paleo as a “fad” gives them a justification for continuing their familiar, unhealthy eating habits without feeling guilty), but it’s always frustrating, and it’s completely inaccurate. In reality, Paleo is different from “fad diets” in several very significant ways.

In general, fad diets are short-term weight-loss plans that rely special tricks and gimmicks to disguise how they really work: an extreme reduction in calorie intake. They play on the psychological rollercoaster of self-hatred and desire for immediate results, and ride that wave of short-term motivation until the dieter caves and goes off the diet, and then blames herself for “having no willpower” or “being lazy.” Take a look at some common characteristics of a fad diet:

Some dietitians also define a “fad diet” as “anything that doesn’t meet the USDA Dietary Guidelines,” but this is just knee-jerk defensiveness: there’s nothing infallible about the USDA, and whatever legitimate criticisms you can make about fad diets, “it isn’t profitable for the dairy industry” is not one of them. So ignoring the nonissue that Paleo doesn’t comply with USDA guidelines, does it meet the other criteria for fad diets listed above?

Fad diets aren’t sustainable – most of them are so unbearably restrictive that you’d have to be missing your taste buds to even consider sticking with them for the long haul. For example, take a look at the baby food diet, which involves replacing 2 meals a day with up to 14 jars of baby food. The idea is that not only is baby food low in calories, but it’s also free of additives and preservatives, full of nutrients, and prepackaged in easily portion-controlled jars.

All this sounds great, but who in their right mind would want to eat baby food for 2 meals every day for any length of time? It’s bland. It’s mushy. It’s probably not even all that appetizing to babies, but they can’t complain about it. Almost nobody would be able to stick to this diet for more than a week or two at the most; it’s just too boring and monotonous.

It’s also unsustainable because baby food doesn’t provide all the nutrients an adult needs, notably sodium, calcium, and fat, not to mention adequate calories. Eating the baby food diet in the long term would actually be dangerous to your health.

That’s why most of these diets are actually packaged as quick weight-loss plans that are only supposed to last for a few weeks at most. They’re not designed for lifelong adherence. Unfortunately, this means that the weight loss is as temporary as the restriction. The dramatic decrease at the beginning is really nothing but water weight, which dieters regain immediately when they start eating regular food again – as they certainly will.

Contrast that with Paleo, which is designed for comfortable and healthy long-term maintenance. Unlike fad diets, Paleo helps you develop a healthy mindset about food, and learn how to navigate realistic compromises between the chocolate cake all around you and the desire to take care of your body. It’s not all-out for a week and then back to “normal” with a sigh of relief and a shudder every time you pass the baby food aisle; it’s nutritionally complete, healthy, and workable for the long term.

Obsessive Focus on One Food

A related trend in fad diets is a fixation on the supposed health benefits or dangers of just one type of food. For example, take the grapefruit diet, which promises to help you lose 10 pounds in 12 days by eating ½ a grapefruit before every meal. Some of the health claims on the website (with poor spelling and grammar preserved from the original) include:

“Citric acid of fresh grapefruit juice has an alkaline reaction that increase the alkalinity in the body. The fruit juice has been found useful in treating many diseases caused by too much acid in the body system.”

We’ve debunked this myth extensively here. The only way to get “too much acid in the body system” is to inject it into your bloodstream, in which case you’d be beyond the power of grapefruit to help.

“Grapefruit stimulates appetite and posses unique ability to burn away fat, for many years people have used the fruit to lose weight.”

It makes you hungrier, and this is supposed to be useful for dieters? The website is also very light on the evidence for the “unique ability to burn away fat.

“Grapefruit peel is rich with pectin which is used for the preservation of other fruits. The peel oil can also be use as soft-drink flavouring.”

“Grapefruit contain natural ‘quinine’ which is used to treat malaria. This ‘quinine’ can be extracted by boiling a quarter of a grapefruit and straining the pulp.”

If you have malaria, go see a doctor who can give you some actual quinine that will actually cure your disease. If you don’t have malaria but do want to lose weight, there’s no evidence that quinine will do anything to help.

Grapefruit juice inhibits a special enzyme in the intestines that is responsible for the natural breakdown and absorption of many medications.

Making medications less effective is supposed to be a benefit?

There are no references cited for any of these claims. Contrast this with any Paleo site, even the personal blogs run by non-experts. Yes, we love certain foods for their health benefits, but no single food is held up as the shining example of nutritional perfection. Even vegetables aren’t safe from criticism! You can eat Paleo without ever touching a drop of coconut oil or a single leaf of kale. Because it’s not fixated on any one particular food, Paleo represents a much more balanced spectrum of nutrition.

Weight Loss Above All

Why does anyone go on a fad diet? It’s not because they really think they’ll be healthier eating only cabbage soup or baby food; it’s because they’re desperate to lose weight at all costs, even if that cost is their long-term health. In other words, creators of these diets start with the question, “what will cause the fastest weight loss?” and not “what will make people healthiest?”

The result is extreme plans like the hCG diet, a regimen that claims to banish 30 pounds in a month using a combination of an extremely low-calorie diet (500 calories per day) and special hormone injections made from pregnant women’s urine. Obviously, this is a seriously malnourishing diet, because it’s just not possible for an adult human to meet all their micronutrient needs with that calorie intake.

Paleo is the complete opposite of these diets, because it starts with the question of what human beings will be healthiest eating. The goal is health first and foremost – for some people, it means weight loss; for others, it means weight maintenance, and for others, it might even mean weight gain. Since it’s about real health and not just dropping pounds, Paleo doesn’t carry the dangerous consequences of untested “miracle therapies” or the risks of nutrient deficiencies. It’s appropriate for everyone, unlike fad diets that are only targeted towards overweight people in the first place.

To go along with these absurdly extreme prescriptions, fad diets tend to make ridiculous claims about their effects. For example, take this claim from a website promoting the Master Cleanse (a crash diet based on consuming nothing but a lemon juice/maple syrup/cayenne pepper “lemonade” for 10 days straight):

As a reducing diet it is superior in every way, reducing at a rate of about two pounds a day for most persons, without harmful side effects…Those with chronic illnesses have the potential for tremendous benefit as Mr Burroughs proved repeatedly over 35 years that toxicity is the cause of ALL illness.

The rapid weight loss of 2 pounds a day might actually be true – but it’s all water weight and muscle wasting. Muscle wasting is dangerous and unhealthy, and water weight will come right back when you start eating food again, so the “weight loss” is just an illusion. And the implication that a “cleanse” of lemon juice, cayenne pepper, and maple syrup can heal “the cause of ALL illness” is ridiculous.

Paleo is a very effective diet for weight loss, but you’d be hard-pressed to find this kind of hyperbole. Just to give one quote from the Perfect Health Diet book:

Note the focus on the long term, the realistic and achievable calorie deficit, and the “slow and steady” rate of weight loss that doesn’t rely on rapidly shedding water weight in the first few days.

Paleo is also very effective for treating illness, especially chronic illnesses, but it resists the temptation to make unsupportable health claims, least of all the claim that an unmodified, generic Paleo template will magically heal every conceivable illness. While a Paleo approach isa good starting point for treating chronic disease, everyone agrees that diseases are more complicated than “just eat Paleo and you’ll magically be cured.”

One Strict Set of Rules

Most fad diets have a single plan that you have to follow – otherwise, you’ve failed at sticking to it. For example, take the Sacred Heart Diet. It’s based around a special cabbage soup, and the 7-day plan looks like this:

This is supposed to somehow take advantage of the combinations of different foods to help you lose weight faster. As you can see, the rules are basically handed down from above without allowing the dieters themselves any flexibility in the plan. (Also note that this diet shows several of the other characteristics above, most notably the focus on one single food).

Contrast that to Paleo, where the “diet” is a set of principles for thinking about foods, not a strict list of “allowed” and “forbidden” foods or worse yet, a required menu. This means that it relies on individuals to interpret the principles and intelligently apply them to their specific circumstances, not just mindlessly follow along with a set of daily menus. Yes, there are meal plans available, but these are mostly for convenience, not because they represent the only way around to eat Paleo.

Clearly, Paleo is very different from the typical “fad diets.” Paleo has a healthy and sustainable variety of foods; fad diets are extremely focused on one “miracle” food or so restrictive nobody can stay on them for long. Paleo has an organic, grass-roots group of people searching for the optimal way for human beings to eat; fad diets have a fixed set of rules handed down from some authority figure and are only concerned with weight loss.

In the end, the term “Paleo” and the caveman imagery might make the ancestral health movement look like a fad diet. If you try to imagine the “caveman fad diet,” you might think of things like raw meat (unsustainable and restrictive), an arbitrary set of rules (“this is what cavemen did”) and a crazy culture of lunatic fans. But that caricature isn’t actually what Paleo is like – if the real Paleo diet is a fad, it’s a fad that lasted 10,000 years before temporarily getting derailed by the advent of agriculture.

The caveman image might serve its usefulness and fade away, but the idea of Paleo is definitely not a fad – it’s slowly but surely challenging misguided recommendations about grains, salt, saturated fat, and cholesterol, and in one form or another, it’s here to stay.