Ever wonder what makes coconut oil so great? One of the reasons is a particular type of fat: lauric acid.

Lauric acid is one of several different kinds of saturated fat – yep, there are different kinds, and they all have different effects on the body. If you’re eating Paleo or keto, you probably already know that whole-food sources of saturated fat aren’t the same as Whoppers and Blizzards, and lauric acid is a perfect example of a healthy, whole-food saturated fat. It’s not just that lauric acid doesn’t cause disease; it actually has all kinds of research-backed health benefits. It’s super ketogenic, gut-friendly, a great source of quick energy, and really useful for skincare.

Lauric acid is one kind of medium-chain triglyceride (MCT), so if you’ve ever heard of MCT oil or MCTs, you might already know a bit about the health benefits. But if you don’t, no worries – we’re about to dive right in with 6 things you should know.

1. The best food source of lauric acid is coconut oil.

Roughly 45-50% of the fat in coconuts is lauric acid, which makes coconut oil one of the best food sources of the fat. 1 tablespoon of coconut oil has roughly 6.75 grams of lauric acid. Other fatty coconut foods, like coconut butter and full-fat coconut milk, will also be good sources.

Milk is another source of lauric acid, if you can handle dairy OK, but lauric acid is only about 3% of the fat in milk, compared to nearly half the fat in coconut oil. 1 cup of whole milk has one quarter of a gram (0.25 grams) of lauric acid.

2. It’s metabolized faster than most fats

Compared to most other kinds of fat, lauric acid is really fast to break down and use for energy. As soon as you eat it, it goes straight to the liver, where it’s broken down and used right away.

Why do you care about that? Because quick metabolism = quick energy for you. Think of all the times when you’ve needed a fast energy boost and turned to something full of sugar and junk – now there’s a better alternative. Instead of relying on carbs for a quick pick-me-up, a lot of Paleo and keto eaters use coconut oil or coconut butter. 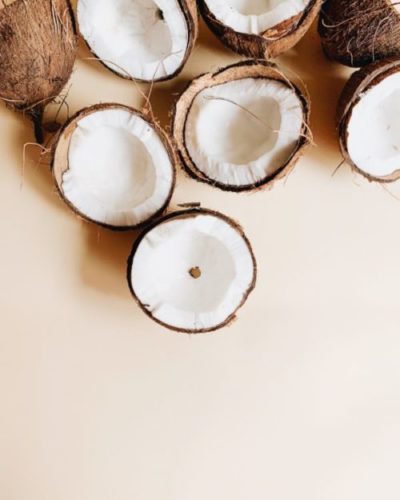 Photo by Irene Kredenets on Unsplash

Because it goes straight to the liver, lauric acid is rapidly and easily converted into ketone bodies. This is true of all medium-chain triglycerides, but lauric acid may actually be the best of the best. This paper suggested that lauric acid is an ideal fat for ketone production because it produces a “lower but more sustained pattern of blood ketone elevation” compared to other MCTs.

This is why people say that coconut oil (remember, coconut oil is the best dietary source of lauric acid) is the most ketogenic type of fat you can eat. In people eating ketogenic diets, coconut oil is actually more ketogenic than other kinds of fat, and can sometimes allow people to eat a slightly higher carb count while staying in ketosis.

If you’re on a keto diet, coconut oil (and other fat-rich coconut products, like coconut butter and coconut milk) should be your new best friend.

Lauric acid has some significant antimicrobial properties – it kills fungi and bacteria. This doesn’t mean that eating coconut oil stops you from getting sick. It’s not like you eat the coconut oil, and then the antibiotic/antifungal properties kill whatever germs were in your body, so you don’t get a cold or stomach flu. That’s not how it works, unfortunately. Don’t we all wish!

But the antifungal/antibacterial benefits of lauric acid do make it really valuable for skincare. Acne, for example, is partly caused by a type of bacteria, p. acnes, that lauric acid likes to kill. Coconut oil doesn’t do a lot on its own, but when combined with other kinds of anti-acne treatments, it could amplify their effects.

Coconut oil may help maintain skin integrity in preterm babies. Not immediately relevant for healthy adults, but it’s a sign that this stuff is pretty great for skin health.

Sticking with the antibacterial benefits for a minute here, some research also suggests that lauric acid may be harmless against healthy bacteria in the gut but help kill off the bad guys that make us sick. This has been shown experimentally in rats, showing both generally healthy and anti-obesity effects.

This hasn’t been conclusively tested in humans yet, so take it with a grain of salt. But it’s definitely promising.

6. It may have benefits for cardiovascular and metabolic health.

To start with the research on humans, two studies recently showed the benefits of lauric acid, combined with a type of protein called L-tryptophan, in the gut. here, it reduced levels of ghrelin, which made the subjects feel less hungry and spontaneously eat less food at a buffet. Here, it reduced fasting blood sugar. It’s worth noting that both of these studies were in healthy, normal-weight men – results may vary in women, people with metabolic diseases, and people who are already overweight.

In one study of Dutch people, lauric acid consumption was associated with a lower risk of developing Type 2 diabetes.

In animal studies, lauric acid has all kids of other related benefits, including lowering blood pressure. Based on all the research, it seems like there are likely some health benefits, and it’ll be neat to see how the research plays out with some more human studies.

The takeaway from all of this isn’t “take lauric acid supplements;” it’s “eat more coconut oil.” You’re going to have to buy some kind of cooking fat anyway – why not get one that has all these health benefits? (As a side note, because lauric acid is a kind of fat, refined and unrefined coconut oil will be equally good for getting it into your diet.)

What health benefits have you noticed from cooking with coconut oil? Got a favorite recipe? Let us know on Facebook or Twitter!