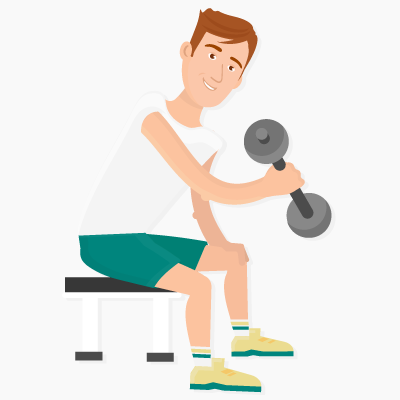 It’s no secret that female beauty standards are seriously skewed. That doesn’t make it less of a problem, but it does mean that most women are aware that media images of what they’re “supposed” to look like are unhealthy. Men don’t usually think of their ideal bodies the same way, since they focus on strength and athleticism instead of just being skinny. But cover models for Men’s Health are just as unrealistic as cover models for Cosmo, and trying to imitate them can be just as dangerous to your health.

Most women with unhealthy body image are trying to lose weight, especially fat. Anorexics famously think they’re fat even though they’re actually dangerously thin. Some men develop anorexia, bulimia, or other eating disorders focused on losing weight, but more commonly, men suffer from a body image disorder called muscle dysmorphia: they see themselves as smaller and weaker than they actually are, and actually want to put on weight (especially muscle mass).

The standard of physical perfection for a lot of men is the muscular athletic type. He has visible abs and sculpted chest and arm muscles. He’s young. He’s a little taller than average, probably with a light tan, and without a lot of body hair. Needless to say, he also has no moles, acne, thinning hair, loose skin from losing weight, stretch marks, or other little flaws that every human being in the real world has at least one of. It’s a physique that shows off a guy’s strength and masculinity without crossing the line into Hulk territory. Think of the Spartans in 300, or just open up any page of a fitness magazine to find ripped models glistening with sweat and showing off their perfect six-packs.

This is obviously an attractive image, and it’s easy to see why people want to achieve it with their own bodies. Especially in Paleo circles, where people are so passionate about health and fitness, there’s a lot of pressure to have this kind of lean, muscular body as an outward sign of how well your diet and exercise regimen is working. This kind of physique gets held up as a sign of health, strength and energy. It’s the ultimate answer to critics who think you have to down tons of cheap carbs with every meal to gain muscle, or that eating any amount of meat is ultimately unhealthy.

In reality, though, there are a lot of problems with idealizing just one body type. Not everyone can, or even wants to, look like that: there’s a huge range of healthy bodies that never get celebrated in magazines. Then there’s the  psychological aspect:  the fitness industry sells products by associating this one image of the male body with power, confidence, and sex appeal – but they do that by making real men feel inferior in comparison (so then they want to buy anything that can get them closer to that mythical perfect body).

Because modern physical ideals are so one-sided, unrealistic, and commercialized, the struggle to have the “perfect” body can actually be unhealthy!

The image of the idealized male body is everywhere. But is this actually what healthy men look like? Let’s be honest here: most of the guys in movies and magazines use steroids and other performance-enhancing drugs to achieve their perfect bodies. The models then do all kinds of extreme preparation before their photoshoots – for example, one man reported that standard procedure was to avoid all water the day before the shoot, but drink an entire bottle of wine to dehydrate his body. During the shoot, the models are so weak and woozy that they have to struggle to stay standing. And don’t forget that even after all that preparation, the pictures are digitally touched up with Photoshop before they hit the newsstands.

Those pictures are not what real human beings look like. Real human beings have scars. Real human beings have the occasional stained tooth, crooked nose, and bitten fingernail. Real human beings have pores, instead of perfectly smooth plasticized skin. Real human beings come in all ages (including under 16 and over 35) and races. Models who are starving, dehydrated, and drunk might look ripped, but this is not a healthy lifestyle for anyone to actually imitate. And yet these are the bodies that magazines promise you can have too, if you only do enough exercise and buy enough supplements. Don’t be fooled by this – they want you to keep feeling insecure and inferior, so they can keep selling you products to “fix” your body. Real men’s bodies, just like real women’s bodies, have a lot of variety, and healthy men come in a wide variety of different shapes and sizes. Just because you look like the guy in the P90X commercials doesn’t mean you’re healthy, and just because you don’t, doesn’t mean you’re fat or sick.

If you get away from the retouched glamor shots in magazines and commercials and looking at photos of people eating traditional diets, you’ll see a wide range of different body shapes. These people didn’t have calories to spare working ten different varieties of bicep curls in the gym to get “perfect” muscles, but what they did have was vibrant health and functional strength that allowed them to perform energy-intensive daily tasks like hunting.

Indigenous Australians are also lean and fit, but don’t fit the modern beauty ideal. A German photographer named Paul Foelsche photographed many native Australians before they’d had significant contact with the white settlers: scroll down to the bottom of this page to see three men in their mid-30s. More photos of aboriginal Australians are here. Some of them have more defined chest and stomach muscles, while others don’t. Or flip through some photographs of the Hadza (hunter-gatherers in Africa who still eat their traditional diet) here. Nobody is overweight, but nobody looks like a fitness model, either.

These people are all healthy. There’s nothing wrong with any of their bodies, and there’s no evidence that any of them would be better off if they were introduced to a Bowflex. On the other hand, some Crossfit athletes and other young and athletic men come a lot closer to the magazine image, and there’s nothing wrong with that, either. Men, just like women, need to realize that there are dozens of different healthy body types, and that no one build is “correct.” Some men naturally run very lean; they might have strong muscles, but those muscles aren’t very visible. Others are naturally bulkier. Some men have visible abs without even trying; others might be just as strong, but their muscles aren’t as obvious. Nature designed men with a wide range of body types, and there’s nothing wrong with any of them.

The Perilous Quest for Perfect Abs

The fitness model physique is completely unrealistic for the majority of people, but it’s presented as something anyone can have. This is how advertising works: first they make you believe you have a problem (the “wrong” body), then they make you feel bad (weak, unattractive, or inferior) about that “problem,” and then they sell you a product to fix it. But nobody can look like an airbrushed model in real life, so the problem is completely impossible to solve.

That doesn’t stop people from trying, though, and the attempts can get very extreme. Of course, there’s nothing wrong with a reasonable amount of exercise, or with wanting to lose excess fat or gain muscle mass. Exercise is a healthy way to beat stress, increase your energy, and get in touch with all the impressive things your body can do. Even exercising to look better naked can be a perfectly healthy goal, as long as “looking better” doesn’t mean comparing yourself to an impossible ideal and judging yourself as inadequate if you don’t measure up. There are plenty of great reasons to work out, but working out in response to poor body image can easily get dangerous.

On the purely biological side, the washboard abs look takes a very low body fat percentage and an intense dedication to training, and even then it’s not always possible. Some men try to make it happen by embarking on an extreme calorie-cutting diet and spending hours every day in the gym. Unfortunately, this kind of overtraining is completely counterproductive, since it’s putting an enormous amount of stress on your body. The stress releases the hormone cortisol, which (among other nasty side effects) causes your body to retain and build up belly fat.

Even if you do make it down to an extremely low body fat percentage, long-term calorie restriction is a serious risk for nutrient deficiencies, especially in teenagers who are still growing. Training too hard and eating too little is a perfect recipe for a weak immune system, and puts you at serious risk for injuries. It also isn’t a way to gain muscle – you can lose weight by cutting calories, but to put on muscle, you have to eat.

Maybe because they realize that they won’t gain any kind of muscle on a calorie deficit, some men keep the extra workouts but try for a huge calorie surplus instead. Unfortunately, bulking is pretty difficult to do on a strict Paleo diet, so it often leads to supplementing with protein powders and other “liquid calories” that don’t belong in anyone’s diet. These hyper processed “foods” are completely devoid of nutrition and bear very little resemblance to anything your gut is designed to process.

As well as being physically extreme, the preoccupation with having the “right” body can also be socially isolating. Constantly feeling dissatisfied with your body doesn’t make for a very happy lifestyle. It’s physically exhausting to spend so much of your life in the gym, especially coupled with extreme calorie restriction; it can leave you grumpy and tired, and unable to enjoy the activities you used to like. Paleo is supposed to be about enjoying your newfound health, not driving yourself insane trying to balance calories and macronutrients to achieve some supposedly perfect set of abs.

What diet magazines want you to do is look at their photos, feel dissatisfied with your own body, and buy their product to fix it. What you can do instead is look at the photos, understand that they aren’t realistic images of what most men actually look like, and fight back against the constant message that your body isn’t good enough. You can enjoy being fit, lean, and healthy without ever looking like a sports model. Take pictures, track your workouts, and enjoy watching your health and performance improve, instead of measuring yourself against some unattainable ideal. Eating a smaller calorie surplus over a longer period of time is a healthier way to gain muscle than doing a “dirty bulk” by shoving everything in a five-mile radius into your mouth for a few weeks. Alternately, try an intermittent fasting protocol to get the benefits of calorie restriction without the risk of nutrient deficiencies (since you’re eating the same amount of food, but just at different times).

Ultimately, you still won’t end up looking like an airbrushed photo spread, but that’s just fine. Bodies that can run, jump, crawl, lift, and stretch are healthier and stronger than bodies that just look good on magazine covers.  Media standards of men’s bodies are largely unrealistic and designed to make money for the fitness industry at your expense, so stop playing their game. With a healthy diet and exercise routine, you get something more important than shrink-wrapped skin and “perfect” abs: you get health.