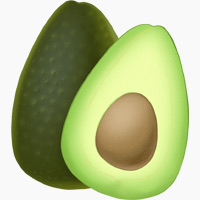 Even if you’ve never heard the term “monounsaturated fat” (abbreviated MUFA), you’ve probably heard it skimmed over as “the good fat found in olive oil” or “the heart-healthy fat in avocados” or something similar. When you read descriptions like that, the type of fat they’re referring to is monounsaturated fat. Specifically, here are some major food sources that you might recognize:

You’ll also find it in avocado oil and a few other oils, if you cook with those, but they’re much less common.

Notice the lard and tallow on that list: a lot of people somehow have the impression that they’re solid chunks of saturated fat, but that just isn’t true. Roughly half the fat from pigs and cows is monounsaturated fat.

Monounsaturated fat is commonly praised as the “good fat:” it’s the one that even major public-health associations are fine with. And today, when we find a “good” nutrient (whether it’s a vitamin, a mineral, or a type of fat), the tendency is to take it out of context and start supplementing or fortifying foods with it, or eating huge amounts of it because hey, it’s “good,” right?

Monounsaturated fat is very interesting, because it flies in the face of this approach. If you really take a look at the research, monounsaturated fat per se isn’t actually so fantastic – it’s not dangerous, but the benefits are a little underwhelming. But if you break it down by food sources, some of the individual foods really do live up to their hype: what gives?

“What gives” is that humans don’t actually eat pure monounsaturated fat; we eat foods, and foods are more than the sum of their parts. Monounsaturated fat is healthy in the context of certain foods (which also contain things like antioxidants), and especially in the context of certain dietary patterns. This jives perfectly with the Paleo approach to fat. The Paleo approach isn’t “eat as much lard as you can cram into your mouth;” it’s “eat generous amounts of fat, preferably from whole foods, in the context of a nutrient-dense diet.”

What Makes the “Good Fat” so “Good”? Context!

The big claim for monounsaturated fat is that it’s “heart-healthy.” This synopsis of meta-analyses found that most of the reviews covered found some benefit, although it’s difficult to compare them because the study designs were so different (e.g. some replaced carbohydrates with monounsaturated fat, while others replaced saturated fat). The researchers concluded that:

The results of the different meta-analyses addressed in this review point to a beneficial effect of MUFA-rich diets on systolic and diastolic blood pressure as well as parameters of glycemic control. On the other hand, the impact of MUFA on blood lipids is still discussed controversially.

By “discussed controversially,” the authors mean that all the studies on monounsaturated fat and blood lipids had different conclusions, so it’s hard to tell what the effect is (if there is one).

This review and meta-analysis sheds some light on the issue. It found that total monounsaturated fat intake was associated with lower rates of death in general, death from heart disease in particular, cardiovascular events, and stroke. But when the authors separated out different sources of monounsaturated fat, they found that the major driver of these effects was olive oil. Monounsaturated fat from meat and animal sources wasn’t associated with much, if any, improvement in health. It didn’t cause any damage; it just had no real effect at all.

This seems like it should support the “evil animal fat” hypothesis: monounsaturated fat is only “good” when it comes from plants without any saturated fat along for the ride. But that doesn’t make sense; if animal fat is evil, why didn’t it have any detrimental effects?

Instead of blaming animal fat, the researchers took it in a different direction and looked for what could make olive oil so much better. Specifically, they looked at antioxidants. Whole foods like avocados, nuts, and extra virgin olive oil contain various antioxidants in addition to their MUFA, and the antioxidants affect the quality of the fat. Specifically, they protect it from stressors like light and heat that could otherwise damage it and cause it to become oxidized and inflammatory.

Animal fats don’t contain antioxidants, and more importantly, they’re eaten in the context of a junk-food-rich, antioxidant-poor diet. You can add antioxidants to your animal fat in the form of spices when you cook with it, and they work the same way to protect the fat from oxidation. But most people who eat a diet high in animal fat aren’t eating Paleo; they’re eating a lot of processed meat and junk food and conspicuously lacking most things colorful and antioxidant-rich.

There’s nothing wrong with monounsaturated fat – even where the researchers couldn’t find great benefits from it, they didn’t find any real downsides either. But for talking about its potential cardiovascular benefits, the source of the fat matters: olive oil is a great example of why trying to separate individual nutrients from whole foods isn’t necessarily a great idea.

It’s not terribly helpful to say that “monounsaturated fat” is good for you, but foods that contain it (like olive oil) certainly are, especially as part of a dietary pattern that reinforces their health benefits. Paleo isn’t about just eating huge globs of fat for the sake of eating huge globs of fat. “Healthy fat” means “fat from whole foods, eaten in a health-promoting dietary context.” That’s what really makes a fat “good” – and it’s something to remember in a world where supplementing with isolated “good” nutrients is often seen as the answer to every problem.