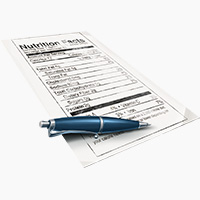 “Net carbs” sounds like something made up for an infomercial, but it’s actually not nonsense! If you’re trying to go low-carb, then understanding net carbs can be really helpful for meal planning and troubleshooting.

Net carbs: what they are and how they work.

Let’s start with a very simple definition of net carbs. For any particular food or meal:

Why doesn’t fiber count as a type of carb?

Fiber is technically a kind of carbohydrate in the biological sense. But because of the way the human digestive system works, you can’t break down fiber to get energy from it. Fiber passes through your stomach undigested until it hits your large intestine.

Most keto-friendly vegetables are high in fiber.

When fiber gets to the large intestine, things get a bit interesting. You can’t digest that fiber, but your gut bacteria can, at least for certain types of fiber. So fiber is essentially food for your gut bacteria, not for you.

Sometimes, the gut bacteria break down fiber and produce short-chain fatty acids (SCFA) like butyrate. You can digest some of those SCFAs, but those are fats, not carbs. So to the extent that you get any actual calories or nutrition from fiber, it’s actually fat, not carbs.

That’s why fiber doesn’t count as a type of carbohydrate. Assuming your gut bacteria are healthy, fiber will actually add a little bit of fat to your diet, not carbs.

You can’t add fiber to meals to “cancel out” other carbs.

The math above might make it seem like you can just add fiber to your diet to “cancel out” other carbs and reduce the net carbs in your diet. But that’s not true. The “net carbs = total carbs – fiber” formula is nutrition label math, nothing more. You can subtract fiber from the total carb count on a nutrition label, but that doesn’t mean fiber has magic carb-destroying powers.

Another way to put that: calculate the net carbs for each food separately. Carbs in one food (or supplement) can’t affect carbs in any other food.

In the same vein, you can’t ever have “negative carbs.” If you ate a supplement with 80 grams of fiber to go with your pasta, you wouldn’t have -6.7 grams of carbs for the day: that’s totally impossible. You’d still have 73.3 grams of net carbs from the pasta, plus 80 grams of extra fiber and very likely an awful stomach ache from eating all that fiber at once.

Now for the nitty-gritty, because label-reading when you care about net carbs is a bit of a procedure.

Different countries have different labeling rules about total carbs, net carbs, and fiber. In the United States, the Nutrition Facts label will list “Total Carbohydrate” – that’s every type of carb in the food, including digestible carbs and fiber. Underneath the “Total Carbohydrate” category, there will be one or more sub-items. All of these are different fractions of the total carbohydrate. So for example, if you see:

What that means is that there are 10 grams of carbohydrates, of which 5 are sugar and 3 are fiber. So in this imaginary food, there would be 7 grams of net carbs (total carbs – fiber = 10 – 3 = 7). It doesn’t mean that there are 18 total grams of carbs. The “Total Carbohydrate” number includes every kind of carb in the food; all the other numbers are just breaking that “Total Carbohydrate” number down into different categories.

In many other countries, fiber is already subtracted from the total carbs on the label. For example, in the UK, nutrition labels have a line for “Carbohydrates,” which refers to net carbs, and a separate line for “Fiber.” The carbs listed under “Fiber” aren’t included in the “Carbohydrates” line. So if your country does nutrition labels like that, you already have the net carbs calculated for you right on the label.

Dealing with Confusion Over Net Carbs

This is all pretty confusing and annoying, and that’s without even getting into imported foods. But here are some tips and tricks for dealing with the math:

Just to give you an idea of approximately what to expect, here are the carb counts and net carb counts for some common keto vegetables:

This obviously isn’t a complete list of vegetables, but it’s enough to give you a bit of an idea what you can expect for net carbs and fiber in keto meals. Fiber actually takes a pretty significant chunk out of the total carbs for a lot of vegetables.

It gets easier once you’re actually doing it

Counting carbs can be really confusing to read about, but it’s one of those confusing things that gets a little easier when you actually start applying it to your own food. It’s almost easier to learn it by doing it, so if all of the above just set your head spinning, it might help to just plug some foods into your nutrition database of choice and start looking at the carb and fiber counts – and then notice how those foods affect your body when you eat them. After all, that’s really the important part!