Remember the horse meat scandal a while back? It didn’t cause much of a stir in the Paleo world because it mostly affected people who eat pre-packed freezer meals, which aren’t exactly known as a Paleo staple. But unfortunately there are a lot of unscrupulous food producers in the world, and a lot of food fraud does affect Paleo-friendly fare.

Most commonly, this is because Paleo is all about high-quality food, where there’s a lot of temptation for manufacturers to replace real ingredients with cheaper substitutes and pocket the difference. You just can’t make much money substituting something else for white flour or corn oil: they’re already cheap. But when it comes to the good stuff – relatively expensive ingredients like olive oil, chocolate, or honey – there’s a real incentive to cut corners.

Rather obviously, fake ingredients like corn-syrup “honey” or canola oil in your “olive oil” won’t give you the health benefits you look for in the real thing. So to avoid the counterfeit junk, take a look at some Paleo foods to watch out for, and how to get the real stuff:

(unless otherwise noted, information in this post is taken from the USP’s Food Fraud Database)

Did you know that olive oil laundering is one of the biggest moneymakers for the Italian mafia? According to this report, food fraud in Italy makes 12.5 billion Euros of money a year for various criminal groups.

Olive oil has such impressive health benefits that people are willing to pay a lot of money for it, but the real deal is relatively expensive to produce. So importers just replace it with peanut oil, canola oil, palm oil, soybean oil, sunflower oil, lard, hazelnut oil – or in one case in 2012 something the Food Fraud Database listed as “swill or gutter oil (refined oil from recycled food and livestock waste).” Yum!

And even if it’s actually made from olives, “extra-virgin” olive oil typically isn’t: it’s usually a lower grade of olive oil (with a less delicious taste and fewer antioxidants). Less concerningly, 40% of “Italian” olive oil actually comes from somewhere else – this is more a matter of principle than health, though, because there isn’t much difference between Italian, Spanish, and Greek oil.

Avoiding olive oil fraud is unfortunately very difficult. A study from the University of California found that California olive oil was less likely to be fraudulent – but the University of California is hardly an unbiased source, so take this one with a grain of salt. Your best bet might be to find a small local producer with a website or a contact number that will let you talk to someone in charge and satisfy yourself of their honesty.

The good news is that other Paleo-friendly fats (like coconut oil and animal fat) are rarely adulterated or fraudulent, so if you don’t have the budget for real olive oil, you can avoid the problem altogether by picking a different cooking fat.

Real spices have amazing health benefits. But sawdust with added food coloring doesn’t. Take a look at some of the contaminants the USP has discovered in various spices over the years:

Other spices (cinnamon, coriander, oregano, basil, star anise, and spice blends) are also commonly contaminated. To avoid fraudulent spices, be very wary of the cheap buys: pick a reputable merchant and avoid the massive $1.50 bargain-bin jars at Aldi or Wal-Mart. Yes, it’s more expensive. But would you rather pay $1.50 for sawdust or $3.00 for an actual spice? 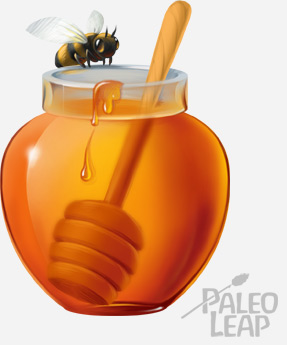 Most of the honey you buy in the store is actually honey - that is, it was made by bees in a hive. But it’s also typically imported from China under a false country of origin label – and imported Chinese honey is contaminated with heavy metals and illegal antibiotics.

Luckily, it’s fairly simple to avoid the Chinese products – just get to know a local beekeeper or buy honey from a producer you can verify. It’s in the nature of honey that nobody can be 100% sure exactly what’s in it (since bees fly where they will, and if they happen to find a spilled popsicle on the sidewalk, they’re going to go for it). But at least you can find a supplier who isn’t intending to deceive you!

In an investigation that ran from 2010 to 2012, ocean conservation group Oceana found that 33% of fish samples in grocery stores nationwide were mislabeled, meaning that consumers weren’t getting the kind of fish they thought they were. The worst offenders:

Also, some fish marked “wild-caught” (especially salmon) was also farm-raised. This might not seem like such a big deal, but considering that farm-raised salmon is much less nutritious, it’s potentially robbing you of a lot of the goodness you’re expecting from your dinner.

If you’re buying fresh fish, one step towards avoiding fish fraud is to pick whole fish over fish sticks or other similar products. And in several tests, canned fish was a lot less likely to be fake than whole fish, since there are fewer steps in the distribution and processing line.

Another way to protect yourself against fish fraud is to find a local grocery store that participates in the Trace and Trust program, which tracks fish from boat to plate, and gives you a unique ID number to look up your particular fish and see where it came from. But as always, the best way is to catch it yourself, or go to a real fish market and put a few questions to the fishmonger.

100% fruit juice should have one ingredient: fruit (and maybe some water).

100% fruit juice should not include beet sugar, corn sugar, high-fructose corn syrup, MSG, ascorbic acid, or water purification byproducts. It also should come from the type of fruit listed on the label – so if your juice is labeled “cranberry,” cranberries should be what you’re getting.

But most juice on grocery-store shelves is apple juice, regardless of what the label says, and even that is often contaminated with fillers and other ingredients. Sometimes, the “juice” actually contains no juice at all.

Orange juice is one of the worst offenders here, as are trendy juices like pomegranate. But all kinds of juices commonly contain fraudulent or even dangerous ingredients, so a better alternative is to buy and juice your own fruit. That way you can be absolutely sure about what you’re getting.

You already know to avoid “breakfast syrup,” “pancake syrup,” or “maple flavored syrup:” those ones have the high-fructose corn syrup right on the label. But even if your bottle is labeled “maple syrup” on the ingredients list, it might be hiding a blend of cane sugar and artificial flavors, beet sugar, beet syrup, corn syrup, cane syrup, high-fructose corn syrup, or just plain sugar water.

Unless you have a very sharp taste for processed sweeteners (most people don’t), the only way to make sure you’re getting something from a real maple tree is to buy from a farmer you trust. This can be tricky for people who don’t live in maple-syrup producing areas, but many small operations now sell their product online, making it accessible even to consumers across the country.

Tea can be contaminated with ingredients as diverse as Prussian blue (a blue dye familiar from watercolor paint), leaves from the wrong plant, spices, food starch, sand, clay, or sawdust. This is especially true of the cheapest brands, since the people who buy these teas aren’t expecting a gourmet flavor and won’t be as vigilant about the taste.

One quick and easy way to avoid fraudulent tea: buy loose-leaf instead of tea bags. Tea bags can hide a lot, so it’s easier to sneak unsavory additives past the radar in bag form. As a bonus, loose-leaf tea is considerably cheaper per cup; you have to buy a tea ball at first, but it pays for itself in a week or two.

Thirsty for some sticks, roasted soybeans, acorns, sugar, or potato flour in your morning cup of Joe? That’s what you might be getting in off-the-shelf “ground coffee,” especially the cheap brands. More alarmingly, one 2012 report found coffee contaminated with barley, which could be very dangerous for the gluten-sensitive who weren’t expecting to find grains in their mug!

To avoid this, buy your beans whole and grind them at home. That way, if there’s anything wrong inside, you’ll see it right away.

As well as the tips and tricks listed under each specific item, some good strategies for avoiding food fraud are:

Some of these foods are best avoided entirely if you don’t have the money or other resources to make sure of what you’re getting. Coconut oil, for example, is very rarely fraudulent: if you can't get good olive oil, just cook with coconut oil and buy some whole olives if you want their health benefits. Maple syrup and honey are “sometimes” foods anyway: nobody needs them to eat well, and if money is tight, your budget would be better put to work on quality meat and vegetables.

If this all makes you angry – good! It should make you angry. Rampant fraud is just one symptom of a food system that revolves around profits, not health. This is not how food should work. But unfortunately, this is how food does work in today’s world, and while we're busy fighting for a better system, it's up to us as individuals to protect ourselves from the one we have.