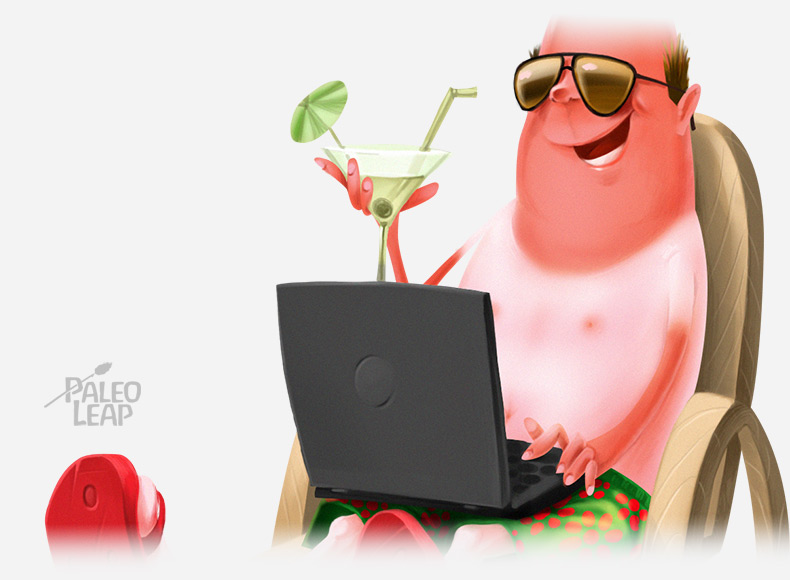 Summertime: the season of barbecue parties, trips to the beach, hiking adventures – and a thousand hysterical warnings about the importance of slathering mass quantities of sunscreen onto every inch of skin before you even think about opening your front door. Brandishing the threat of melanoma, these messages treat the sun as nothing but a deadly carcinogen; the assumption seems to be that we’d be better off living in 24-hour darkness, and that any kind of sun exposure is a risk that’s barely acceptable even with the most obsessive precautions.

Astonishingly enough, it never seems to occur to these sun-phobic dermatologists that the sun does not exist exclusively for the purpose of giving us cancer. In fact, some sun exposure is crucial for our health, and human beings thrived for millions of years before we’d ever heard of SPF anything. It’s true that the “sun” we get today isn’t exactly the same as the “sun” we got for most of our history (the thinning of the ozone layer, for example, is a recent phenomenon), so it’s perfectly plausible that a little more caution is prudent for those of us living in 2013. But a reasonable approach also has to consider the benefits of sun exposure, and the very significant questions about how healthy and useful sunscreen actually is.

Given the constant warnings to practically bathe in sunscreen or immediately drop dead of melanoma, you’d expect to see a conclusive body of evidence documenting the protective effects of sunscreen against skin cancer. This is a little complicated, because scientists can’t do a controlled intervention study in humans for obvious ethical reasons (“lie out in the sun every day; we think you’ll get skin cancer and we want to make sure” is unlikely to pass any ethics boards) so the best we have are population surveys.

These are prone to confounding factors of all kinds. On the one hand, people who pay attention to things like wearing sunscreen are likely to also be nonsmokers and make an effort to eat more healthy foods. This would put them at generally lower risk of any kind of disease. On the other hand, people who wear sunscreen are likely to be the people who spend the most time in the sun, putting them at higher risk for any sun-related problems. So the human data we have to work with isn’t ideal.

As limited as they are, though, those surveys don’t conclusively indicate that sunscreen will make you any safer. A meta-analysis in 2003 found no consistent relationship between melanoma (the most deadly form of skin cancer) and sunscreen use. In fact, people who work outside have the lowest rates of melanoma around, not something you’d expect if the sun were a diabolical melanoma machine. And a 2007 report from the Food and Drug Administration failed to find a connection between sunscreen use and any kind of skin cancer, including the two more common but less-deadly forms (basal cell carcinoma and squamous cell carcinoma). In fact, some studies even indicated that sunscreen posed a risk factor for skin cancer!

How could this possibly make sense? Let’s start with a brief primer on sunburns. The sun emits two types of UV radiation: UVA and UVB. UVB is the kind that causes burning, redness, and discomfort – so that’s what most sunscreens protect against. The SPF rating on the bottle is the measure of how much UVB light the sunscreen blocks.

Unfortunately, these creams are missing the real culprit: UVA rays, which deal out invisible but much more dangerous damage to DNA under the skin. Since sunscreens represent a kind of permission to stay out longer, they can dramatically increase your exposure to UVA rays. This is compounded by window treatments that block UVB but not UVA sunlight, so even though you won’t get a sunburn from sun that filters through your house windows, you’ll still get a hefty dose of UVA.

In other words, excess sun exposure is dangerous, but most sunscreens aren’t terribly effective for preventing the damage, and can actually make it worse by turning off the warning sign (sunburn) that you’ve spent too much time outside. And all this is even without mentioning that the sunscreens themselves are packed with all kinds of chemicals that are readily absorbed through your skin. Chemicals aren’t dangerous just because they’re chemicals, and it’s important not to get caught up in hysteria over the idea that “unnatural” equals “deadly,” but there are legitimate concerns about several common sunscreen ingredients.

Concerns about chemicals aside, there’s a very real danger of sunscreen use that is well-documented. The UVB-blocking action of sunscreens prevents a crucial metabolic process: synthesis of Vitamin D.

Vitamin D is a bit of an oddball “vitamin” (actually a hormone). Technically, it’s present in food, but very few of us actually get enough in the diet. Our skin makes up for the deficiency naturally when it’s exposed to UVB light – unless, of course, we smear a load of sunscreen in the way. SPF 8 sunscreen knocks Vitamin D synthesis down by over 95%; SPF 15 cream lowers it by over 98%. When you think of how many people smear SPF 30, 50, or even 100 sunscreen over every exposed surface in their body, it’s no surprise that Vitamin D deficiency is completely epidemic, especially in northern latitudes: one study found that over 75% of Americans were deficient.

Ironically, Vitamin D deficiency is a much more significant cause of cancer (as well as other chronic diseases, including multiple sclerosis, hypertension, diabetes, and cardiovascular disease) than sunlight exposure. So in our quest to avoid skin cancer, we might inadvertently be increasing our total cancer risk overall. And in any case, we’re depriving ourselves of all the other benefits of Vitamin D, including overall bone health, mood, immune function, and fertility.

Looking at all the evidence together, it’s clear that the goal for sun exposure should be to optimize Vitamin D synthesis, and minimize the risk of sunburn (unpleasant and ugly) and more importantly, UVA exposure (carcinogenic). Luckily, it’s perfectly possible to do all three of these at the same time.

The minimal daily dose should be however much sun you need to get your Vitamin D in. This calculator can tell you with a fair degree of precision how long you’ll need to spend in the sun to get enough Vitamin D for the day. It lets you adjust by season, latitude and longitude (you can find this for your city on Wikipedia; for degrees South and East, enter negative numbers), race, time of day, cloud cover, altitude, and even what kind of ground you’re standing on – all important factors that affect Vitamin D synthesis.

Most of the numbers from that calculator are quite small, as low as 4-5 minutes in the summer, if you’re out during peak hours. Nobody burns in 5 minutes. Take a quick walk around the block on your lunch hour, and you’ll be set. Wintertime exposure takes a little longer; if it’s not feasible to be outside for an hour, you may want to look into a Vitamin D or cod liver oil supplement.

On the opposite side of the spectrum, how much sun is too much? It’s impossible to “overdose” on Vitamin D from sunlight; once your body has enough, any more breaks down as fast as it’s created, but after satisfying your daily needs, it’s only prudent to take appropriate precautions for minimizing your exposure to UV radiation. Mostly, this is to prevent the UVA damage, but sunburn isn’t anyone’s idea of a good time, either.

One of the best tactics for convenience and health is to simply remove your skin from the sun. This doesn’t necessarily require you to go inside: put on a hat, lie under an umbrella, or just sit in the shade. Some companies even make special sun-protective clothing. By physically blocking the sun, you won’t have to worry about messy tubes of sunscreen or the need to re-apply anything.

For exposed areas of skin, especially for the beach and other times when you don’t want to cover up, there are several commercially available sunscreens that are made with minerals that don’t penetrate the skin, making the sunscreen itself much less likely to be dangerous. Zinc oxide is the best of these, since it gives the most comprehensive protection against both UVA and UVB rays (titanium oxide is UVB only). If you can’t find an all-natural mineral sunscreen in a store, you can always make your own.

Next best are the full-spectrum (UVA/UVB) chemical sunscreens. It’s absolutely crucial to get a full-spectrum kind; getting UVA only is worse than getting nothing at all, because you won’t get a sunburn so you don’t even realize that any damage is being done. Remember: SPF only measures UVB protection, so hunt down one that says “full-spectrum” on the bottle.

Of course, good nutrition is always relevant; several different nutrients can help prevent a nasty burn. Relying only on nutritional sunscreen for long periods of time isn’t a great idea, but it’s definitely a bonus, especially for the chronic, short-term exposure that all of us get as part of our everyday lives.

Humans are designed to spend some – but not too much – time in the sun. Too little sun exposure leaves us at a high risk for Vitamin D deficiency, while too much is possibly dangerous as well. A sunburn is our built-in warning system for when we’ve reached the point of “too much.”  Think of it as a “fire alarm” for sun exposure: that’s when you know you’ve overdone it. Many sunscreens, unfortunately, turn off the fire alarm without actually putting out the fire. So the problem becomes a little less obvious in the short-term, but in the end, the building is still going up in flames.

Instead of just shutting down the alarm, the best way to go about sun time is to put out the fire – or more accurately, to control the fire so the alarm never starts in the first place. Get the sun exposure your body needs to make enough Vitamin D, and then choose a protection method (or better yet, a combination of methods) that blocks both UVA and UVB rays if you want to stay outside. Don’t go crazy over it, though – and whatever you do, don’t let fear of skin cancer stop you from enjoying the beautiful summer weather while it lasts.