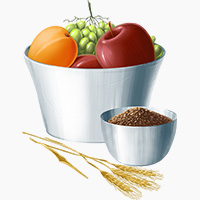 Warning: hemorrhoids are an inherently gross topic. Don’t read this one over lunch.

If you’ve ever had hemorrhoids and looked for a way to treat them with diet, you probably got one answer above all others: fiber. But actually, the relationship between fiber and hemorrhoids is very complicated. The fiber advice is based on the assumption that fiber helps treat constipation, but that’s not always true – some people actually get more constipated eating fiber. And there’s another relevant food component that nobody ever talks about, a group of plant antioxidants called flavonoids.

Here’s a more detailed look at diet and hemorrhoids that goes beyond the fiber-mania.

Hemorrhoids: they’re not very pleasant, but they’re incredibly common: 3 out of 4 people will get a hemorrhoid at some point.

Technically, hemorrhoids are bulging or swollen veins in or around the anus.

Hemorrhoids aren’t usually dangerous, and they typically go away on their own (although they can come back). Some hemorrhoids don’t cause any symptoms at all, so they just show up and disappear without the person ever being the wiser. But for a lot of people, they can cause itching or pain, or blood in the stool, which is scary even if it isn’t actually dangerous.

Is Fiber a Magic Cure?

It’s not like this idea doesn’t have any evidence. This 2005 Cochrane review studied the effects of fiber supplements in hemorrhoids. The review basically compiled a bunch of other studies and looks at all the evidence for a particular treatment. In this case, the authors found seven randomized controlled studies and overall concluded that fiber supplements were helpful:

There was no evidence that fiber was any better than a placebo for prolapse of hemorrhoids, or with itching. Fiber supplements were mostly used in patients with less severe hemorrhoids, and there’s not a lot of evidence about patients with more serious problems. The authors also noted that the small number of trials made it hard to test for bias.

So far, so much evidence for Metamucil. But this newer study (from 2015) shook the fiber connection up a little. The study looked at over 2800 colonoscopy patients to see what was associated with hemorrhoids. What they found was…

That puts a wrench in the idea that low-fiber diets cause hemorrhoids, or that high-fiber diets and fiber supplements prevent them. When the authors broke down fiber intake by type of fiber, they did find a difference in grain fiber intake between patients and controls, but it held constant even after adjusting for constipation. In other words, if the grain fiber actually was helping, it didn’t help by reducing constipation.

The mixed results from fiber studies would be consistent with a pattern of fiber helping some people but not necessarily others. So instead of just focusing on fiber as some kind of magic cure, wouldn’t it make more sense to focus on whatever is causing constipation in the specific person involved? Constipation can come from all kinds of things. Sometimes it’s a gut flora imbalance. Sometimes it’s stress-related (your gut and your brain aren’t separate systems!). Sometimes it’s actually caused by too much fiber, or the wrong kind of fiber.

Another very interesting diet factor rarely gets mentioned at all, even though it’s an important potential confounder for the fiber connection: flavonoids. Flavonoids are a subcategory of polyphenols, or plant antioxidants. For hemorrhoids specifically, flavonoids are relevant because they help improve the flow of blood through the veins. In general, substances that do this are called phlebotonics, so flavonoids are one group of phlebotonics. This Cochrane review looked at phlebotonics for hemorrhoids. Phlebotonics were effective for…

That raises the question: if taking flavonoids as supplements helps with hemorrhoids, could eating foods rich in those same flavonoids be a missing piece in the puzzle? It’s not clear. But it’s an interesting theory, and it might explain some of the complicated and conflicting results about fiber (since fiber-rich fruits and vegetables are also typically rich in flavonoids).

The category of “Flavonoids” includes a huge number of different antioxidants, so members of the flavonoid family are found in just about any kind of fruit or vegetable, and also in black and green tea.

That makes sense when you remember that the major benefit of fiber is supposed to be in treating constipation (reducing constipation = less straining to defecate = less pressure on the wall of the anus = fewer hemorrhoids). But in fact, fiber has very mixed effects on constipation. In people who have functional gastrointestinal diseases, one very common cause of constipation, the wrong kind of fiber can even make things worse.

There’s also another food option that really needs to be explored in more studies on diet (not just supplements): flavonoids.

Putting all that together, from a Paleo angle it makes more sense to focus on managing constipation and improving vein health with whatever treatment works best for you. That might include fiber supplements, but for some people with IBS or FODMAP intolerance, it might mean reducing fiber, or eating only certain types of fiber. For people with slow-transit constipation, fiber might not have much to do with the problem at all. Research into flavonoids also suggests that they may actually help treat the real underlying problem, not just alleviate symptoms (for the low-fiber crowd, try black and green tea for fiber-free sources).

There’s more to constipation than fiber, and dietary therapies that treat hemorrhoids by addressing constipation need to take that into account.