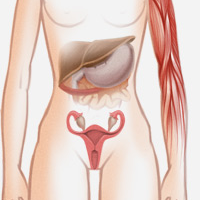 In the list of “things that might be behind vague and mysterious health problems,” thyroid disorders usually come first – but PCOS probably deserves mention just as much: it’s common, it’s poorly understood, and it can be devastating.

The acronym PCOS stands for Polycystic Ovary Syndrome, a very common form of hormone disorder in women (between 5 and 10% of women in the United States have it). Women with PCOS have very high levels of androgens (masculine sex hormones). This typically causes menstrual problems (from extremely painful periods to irregular cycles to amenorrhea), infertility, painful cysts on the ovaries, acne, hair growth in typically “masculine” areas (e.g. a moustache or a beard), and stubborn weight gain or extreme difficulty losing weight. Typically the weight also comes in a more “masculine” pattern: a beer belly rather than an hourglass shape. Just to round it all off, women with PCOS also have worse blood lipid numbers and a higher risk for more “masculine” diseases like heart attacks.

Nobody’s really sure where PCOS ultimately “comes from.” To a large extent, it’s genetic. But just having a genetic predisposition to something doesn’t mean it will actually happen to you, and there’s actually a fair amount of evidence that PCOS can be strongly affected by diet. So here’s a look at the Paleo take on PCOS, with some potential dietary strategies to help control it.

PCOS and Diet: Carbohydrates and Insulin

The most obvious connection between PCOS and food is insulin.

Just a quick review (skip this paragraph if you know what insulin resistance is): insulin is a hormone that your body produces to store energy from food (especially glucose, or carbohydrate) in your muscles, fat cells, and liver. But insulin can’t do this job if the other tissues in your body won’t “listen” to the insulin signal. If this happens, the body’s first response is to produce more insulin, but this only makes the other tissues even less sensitive. Insulin resistance is what it’s called when you’re producing enough insulin but the message to “store this glucose, please” isn’t going through.

That’s a very simplified explanation of a complicated topic, but it’ll do for now. In any case, PCOS and insulin resistance clearly go hand in hand. And the high levels of insulin cue the production of more androgens, which only makes the PCOS worse.

The glycemic index isn’t perfect as a measurement of carb quality, but a “low glycemic index” diet would have to cut out most junk foods, so this could probably stand as a reasonable proxy for a “carbs only from whole foods” diet. And lo and behold, it worked! This suggests that managing PCOS with diet doesn’t necessarily have to mean a very low-carb diet; it might just mean a moderate-carb diet with carbs coming from whole foods, not a bunch of white flour and sugar water.

Another possible way to modify PCOS with diet is through inflammation. Patients with PCOS have higher levels of inflammation than healthy controls even after accounting for weight – and in lean healthy women, researchers can induce inflammation by raising androgen levels.

Related to inflammation, there’s also an Omega-6 connection. Omega-6 fats are essential in small doses, but from a Paleo perspective they get dangerous quickly because in excess they’re highly inflammatory. And just as you might expect, they’re bad news for PCOS. These researchers found that Omega-6 fats may actually directly encourage androgen production, and that Omega-3 supplements helped women with PCOS by reducing the Omega-6:Omega-3 ratio.

So what to do?

The connection with inflammation suggests an anti-inflammatory diet – which Paleo already is, so there’s no real need to go very far afield. Eating plenty of fish and seafood for the Omega-3s is always a good idea, and limiting quantities of nuts and seeds also helps: they’re very high in Omega-6.

PCOS and Diet: Strategies in Review

Just to quickly recap all the things that the various studies suggest for PCOS:

PCOS is hard to deal with, and anyone who tells you otherwise is a liar. Even on Paleo, life is not going to be perfect, especially not right away! Some people might need medication or other interventions even with an absolutely perfect diet, and that’s just fine: as always, a doctor will be able to give you much more personalized feedback.

But with that said, there are strategies that can help you manage PCOS with diet and lifestyle – like finding a carb level that works for you, eating an anti-inflammatory diet low in Omega-6 fats, and reducing inflammation by getting plenty of sleep and avoiding stress. None of these things will “cure” PCOS, because PCOS can’t be cured, only managed well. But they might be a step toward effective management and an overall better quality of life.