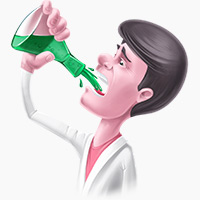 Self-experiments aren’t just fun; they’re also the only way you can get a truly custom-made diet, nutrition that’s optimized just for you. Any dietary template, even Paleo, is based on generalizations about how certain foods affect most people. Most people feel fine when they eat a reasonable amount of starch. Most people lose more weight when they exercise than when they don’t. But maybe you aren’t “most people.” It’s silly to keep doing something that doesn’t work for you just because it’s good for “most people.”

At the most basic level, experimenting on yourself is as simple as “try it and see how you feel,” but paying just a little bit of attention to designing your experiment can get you much more useful information in return for your trouble. For example, when was the last time you saw a study abstract that looked like this:

The Effects of a Healthy Diet, Increased Exercise, and Social Interaction on Joe Paleo’s Weight, Blood Pressure, Blood Lipids, and Mood over 12 Hours

This study measured the effects of Joe Paleo’s attempts to “eat healthy” (defined by what the study subject thought “looked good for him”), increased exercise (as measured by the subject’s feelings of being “wiped” after his first day of CrossFit), and social interaction (during the subject’s birthday party) on 4 biomarkers over a 12-hour period. Joe was weighed and measurements were taken after the conclusion of the 12 hours. Joe was way overweight, blood pressure was pretty low, total cholesterol was on the high end of normal, and mood was fine. We conclude that broccoli intake promotes obesity and raises cholesterol, but lowers blood pressure; however, the confounding effects of Joe’s cake intake (3 slices at the party) cannot be ignored.

This “study” would be laughed right out of PubMed, but this is how many people make changes in their lives: take on way too many things at once, rely on vague parameters and measurements, and then forget all about it the next day!

5 Ways to Ruin a Self-Experiment

Joe’s experiment above is like a before and after photo with no before, so it doesn’t really tell us anything. Maybe he was having a fantastic week before the changes, and his mood went down to “fine.” Then the changes would be a bad idea. But maybe he spent the previous five days curled up in a corner listening to his old Evanescence CDs – in that case, “fine” would be a significant improvement. Maybe he was even “fine” the whole time, so the changes had no effect at all. The point is that we can’t tell, because we don’t have a “before” to compare to the “after.”

What should you do instead? Take measurements before you start any kind of intervention, so you can see how the intervention affects you. If it’s something like blood pressure, which normally fluctuates over the course of a day, take regular measurements for several days first. This even applies to subjective markers like mood and energy: keep a journal and write it down. Then you’ll be able to compare your before and after, to see what effect the changes actually had.

Joe’s experiment makes it impossible to make a clear connection between any of his biomarkers and any of the interventions, because there’s no way of separating the effects of all the different changes. You can’t conclude that starting a Vitamin D supplement improved your mood if you also started a better job, adopted a puppy, and moved across the country at the same time. Inevitably you’re going to have some uncontrolled variables in your experiments, because that’s just the way real life works. But try to control for these confounding factors as much as possible: the easiest way is to only change one variable at a time, instead of switching up everything and trying to pin the results on one of many factors.

Joe’s experiment ran for only 12 hours, which isn’t long enough to see any significant long-term trends. To avoid premature conclusions, the self-experiment experts at Quantified Self suggest running your self-experiment until you get between 5 and 40 (ideally 10-20) days of “flat results” (no change in whatever you’re measuring). The actual experiment might take much longer, if the data keep changing.

Major lifestyle changes can take several days or even weeks to show results. Sometimes there’s an initial change followed by a plateau. Sometimes, there’s an initial increase, followed by a decrease, or vice versa. For example, people who transition to a Paleo diet often have to fight through a few weeks of cravings and mood swings before they start seeing all the benefits. Two days in, it seems like Paleo makes everything worse. But stick with it a little longer, and the benefits will finally kick in.

Joe didn’t use any accurate measurements or even attempt to quantify what he was testing. “Way overweight” is not science! Quantifying your changes and results gives you the data to make actually useful observations, and also forces you to be honest about how much of a change you’re actually making. Notice that Joe was trying to “eat healthy” but also had 3 slices of birthday cake, and then concluded that “eating healthy” promoted obesity! Keeping a food journal would have forced him to be more honest, and made the experiment more valuable.

To avoid this trap, use some kind of consistent method to measure your changes and your results.  With something like blood sugar or weight, measurement is pretty easy. For diet, you can keep a food journal of what you ate. With a factor that’s more nebulous, like mood or insomnia, keep a record detailing your symptoms before, during, and after the experiment, and come up with some reasonable way to quantify them. For example, you could track your mood on a scale of 1-10.

Joe avoids this one completely, because his study was so short that there aren’t any records to keep! But run any experiment for a reasonable amount of time, and you’ll end up with a bunch of data: food records, weights on different days, and so on. Getting this data is the whole reason for running the experiment in the first place, so don’t throw it away. After all, you can’t possibly learn from your results if you don’t remember them. Just taking a look at all your data together can reveal trends or associations you didn’t even know were there.  Record your results in whatever way makes sense for your experiment, so you can review them when you’re done, or plug them into Excel and make a graph (great for spotting trends, or just for showing off to your friends).

Designing a Good Self Experiment

As opposed to the terrible experiment design above, an example of a useful self-experiment plan might go something like:

The Effects of Magnesium Supplementation on Joe Paleo’s Sleep

Joe studied the effects of oral magnesium supplementation (300mg magnesium citrate) on his sleep quality and energy. He predicted that the magnesium would help him get to sleep. He measured his sleep using the SleepCycle app for his iPhone, and kept a daily record of how tired he felt on a scale of 1 (zombie) to 10 (Energizer Bunny). He started measuring his sleep a week before starting the magnesium to get a baseline measurement, then started the magnesium and continued tracking 2 weeks. He also tracked his mood, bowel movements, and muscle soreness after workouts, because his research showed that magnesium can affect those things as well. On average, Joe got 18 more minutes of quality sleep per night, and his average energy increased from a 6 to a 6.5. He concluded that the magnesium was helping and kept taking it.

Notice the numbers! Everything is specific, detailed, and quantified. The experiment lasted for a reasonable amount of time. This “abstract” is about as long as the first one, only instead of measuring many things uselessly, it measures one thing well. It gives Joe useful information that he can actually take action on.

More tips for designing a great self-experiment include:

There are also plenty of resources available to help you take n = 1 from OK to amazing:

Whether you’re a veteran self-experimenter or just starting out, there’s always something more to find out. The article index is a great place for ideas, or you could start by just doing a search for anything you’d like to optimize, to find out what other people are trying. Good luck!