If you want to know whether or not someone is at a “healthy weight,” the first thing you’d typically ask for is their BMI, or Body Mass Index. BMI basically measures the ratio of your weight to your height, so it accounts for the fact that a 5’1” person could be perfectly healthy at 110 pounds, while a 6’1” person would be dangerously underweight at that same number.

When people use BMI as a measurement of a “healthy weight,” what they’re really measuring is a “healthy fatness:” it’s not weight per se that causes health problems, so much as too much or too little fat tissue. Fat is a metabolically active organ; too little and we die or start having very severe health problems, but too much and we start being susceptible to chronic inflammation, insulin resistance, and other health problems. The assumption behind using BMI to measure health is that most people at a given weight have a relatively similar amount of bone and muscle and organ mass, so BMI is largely measuring variations in adipose tissue, or body fat.

The Problem with BMI 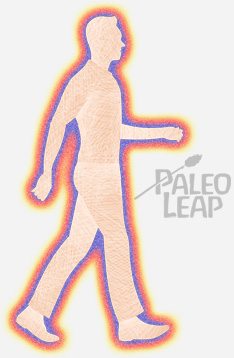 This person could be obese on the inside – you can’t tell just by looking or even by measuring his weight.

On a population level, where individual variations balance each other out, BMI is a useful tool. But an increasing amount of research into body composition suggests that BMI isn’t great for measuring the health of individual people.

Everyone’s heard of the professional athletes who are “obese” or “overweight” by BMI even though they’re lean, fit and extremely healthy: they just have a larger-than-average amount of muscle mass, and BMI doesn’t distinguish between muscle and fat. These athletes are very unlikely to be struggling with the health problems of obesity.

Most of us don’t have enough muscle mass to tip us into “obese” or even “overweight but what’s more common is the other end of the scale: people with a “normal” BMI who are overfat – who may not even realize they have a problem, because their BMI is normal so nobody thinks to check.

“the prevalence of the MONW syndrome ranges between 5% and 45%, depending on the criteria used, age, BMI, and ethnicity… when compared with control subjects, MONW subjects display an altered insulin sensitivity, a higher abdominal and visceral adiposity, a more atherogenic lipid profile, a higher blood pressure, and a lower physical activity energy expenditure…MONW subjects are at higher risks for type 2 diabetes and cardiovascular diseases.”

For their health, these people need the same interventions as people with obesity and metabolic syndrome, but they’re unlikely to get the help they need because their BMI is “normal.” You can only see the problem once you look at their body fat percentage.

Body fat percentage is exactly what it says on the tin: of your total body weight, how much of it is fat tissue? There’s no confusing a muscular athlete for a couch potato, and there’s no confusing someone with normal-weight obesity for a healthy normal-weight person, so body fat percentage is a better measurement of someone’s likeliness to develop health problems caused by too much or too little fat tissue.

Great, right? The problem with body fat percentage is that it’s much harder to measure than BMI. For most of the available methods, you basically have to choose between accuracy and convenience.

What If Precise Numbers Don’t Matter?

That might be pretty discouraging – there’s a more accurate measure of health, but it’s hard to measure. But what if you don’t necessarily need to know your precise body fat percentage? What if it’s enough just to know that body fat is more important than BMI?

For one thing, if you’re trying to lose fat, you can get a relatively accurate measurement of progress by using the same method under the same circumstances every time. Say you use calipers and they overestimate your body fat percentage by 5 percentage points (e.g. you have 20% and they tell you 25%). You can still use those calipers to track your downward progress, even if the exact number isn’t accurate.

For another thing, knowing the importance of body fat puts the focus of “health” on being fit, not just thin. With so many people obese at a “normal” BMI, thinness obviously isn’t a measurement of a normal body fat percentage. Calorie restriction for thinness isn’t the answer; the focus shifts to eating well for metabolic health, and to exercise and fitness – for getting rid of fat around the organs that may not be visible but still causes health problems.

Measuring by BF% gives you permission to build muscle – which is healthy! – even if the scale goes up. Your weight may have increased, but your body fat percentage went down. Way too many people panic when they gain weight from heavy resistance training, even if their body looks fantastic and their clothes are fitting great. If you know that body fat is more important than BMI, this just isn’t an issue: the weight is muscle, everything is fine, no reason to worry.

One day, we’ll probably have a measurement of body fat percentage that’s both accurate and convenient – but until then, just knowing about the importance of body fat is already helpful.

BMI is useful for measuring the overall population, but it’s not terribly relevant to individuals. Looking at body fat instead eliminates a lot of the potential for inaccuracy with BMI – people who are fit with a lot of muscle mass are clearly sorted out from people who are unfit with a high fat mass. And even if you can’t accurately measure your own body fat percentage – most of us don’t have easy access to a DEXA scanner – just knowing that it’s important helps to motivate a very different approach to health, where the emphasis is on fitness and eating well, not just thinness and eating less.