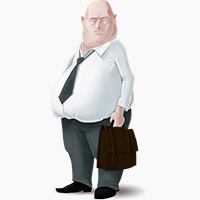 It’s the topic of a thousand pop-up ads, all of them promising just one weird trick to get rid of it. It’s the focus of all too many diets in glossy magazines – just eat enough bananas (or avocados, or grapefruit, or almonds…) and your belly fat will melt away. Women in particular often feel a lot of pressure to eliminate every ounce so they can see their abs, despite very clear evidence that visible abs aren’t a sign of health for all women, and for some women they can represent a dangerous level of thinness.

So why is belly fat so hard to get rid of? Why do some people still have a belly even when they’re thin all over the rest of their body? Is there actually anything special about it, or is it just the “last to go”?

As it turns out, there are actually hormonal reasons why it can be harder to lose belly fat than fat in other areas of your body. Fat tissue is not all the same. And there are also good reasons to get rid of belly fat that have nothing to do with bikini season and everything to do with your health. Here’s a look at what they are and how to make it happen.

In general (although there are exceptions), men have more visceral fat and women have more subcutaneous fat, especially around their hips and thighs. That’s why men much more often have a potbelly with relatively thin legs, while women more typically gain weight in a pear or hourglass shape. But men can also have a lot of squishy subcutaneous fat, and women can also have visceral fat.

Visceral fat is much more dangerous. It’s more strongly connected to health problems like diabetes, heart disease, and high cholesterol, it’s more inflammatory, and it’s very hard on your liver. An excess of subcutaneous fat isn’t great for you, but it’s much less of an issue, and too little subcutaneous fat can also be bad.

Where does Belly Fat Come From?

So where does belly fat (particularly the visceral kind) come from? Everyone has heard that the stress hormone cortisol causes you to store belly fat, and even though cortisol isn’t a demon hormone, chronically high levels of cortisol or misaligned circadian rhythms can be big contributors to belly fat.

The relationship between cortisol and visceral fat is especially strong for people who eat a lot of sugar – which is exactly what people tend to do when they’re stressed out and looking for comfort food. Cortisol may also be one reason why postmenopausal women have higher levels of visceral fat than premenopausal women, and there may also be a link to testosterone levels in men although the research is conflicting about that.

Insulin resistance in general also promotes visceral abdominal fat. In other words, the dangerous kind of belly fat is very much a hormonal problem, which is one reason why it can be so hard to lose. The typical model of “dieting” (eat less/move more) doesn’t do a great job of addressing hormonal imbalances, and in fact, dieting is actually a stressor that can raise cortisol levels. No wonder belly fat is so hard to lose!

Many people (especially women) have an extremely distorted vision of how much fat on their stomach actually constitutes a problem: they look at themselves and think they need to lose fat when actually, they’re fine and the fat they have is hormonally necessary subcutaneous fat that doesn’t pose any kind of health risk. On the other hand, it’s also possible to be thin on the outside, and assume you’re fine because your BMI is normal, but have unhealthy amounts of visceral fat that simply doesn’t show.

For many women, the “goal body” is an extremely lean, fitness-model ideal with visible abs. This is a standard of beauty, but it’s often confused for a standard of health.

Those (heavily Photoshopped) fitness models are very attractive, but that physique is not necessarily indicative of health. It’s one potential healthy body, but it’s not the only one. Visible abs are a sign that you have a very low body fat percentage, which may or may not be healthy for your particular body and physiology – only you can tell. In fact, many women are healthier with slightly more subcutaneous fat, enough to obscure the outline of the muscles underneath.

To see their abs, most women will have to maintain a body fat percentage of around 20% or lower. A healthy body fat range for women is roughly 15-30%, depending on the woman. The healthy range includes all kinds of bodies where the abs are not visible.

Jiggly subcutaneous belly fat (including that little roll under your belly button) in the context of an overall hourglass shape is not the same thing as the dangerous potbelly-style visceral fat, and does not come with the same health problems. In fact, losing it can be unhealthy.

If your body is naturally healthy and strong at a higher body fat percentage, then it isn’t healthy to starve yourself down to the visible-abs range of thinness. Of course, you can do it: you’re an adult and you’re allowed to do whatever you want to your own body. But don’t pretend it’s about health, and remember that the consequences may include lasting fertility problems, osteoporosis, depression, amenorrhea, and rebound weight gain. Choose wisely.

On the completely opposite end of the spectrum, many people falsely assume that they have no belly fat problem because their BMI is normal, but this isn’t the case. Visceral fat accumulation in the abdomen is also not restricted to people who have visibly protruding bellies. You can be “skinny-fat” (technically “Metabolically obese, normal weight”) with dangerously large deposits of visceral fat around your organs that just don’t show up on the inside. This brings the same kinds of problems as visible obesity; it just doesn’t show on the outside.

Unfortunately, since this is hard to see from the outside, it’s very difficult to tell whether or not it’s you, but if you’re sedentary and technically thin but with very little muscle mass, it may be.

So knowing where belly fat comes from, how do you tackle it? Here’s the Paleo approach.

Cortisol management. Get enough sleep, re-train healthy cortisol rhythms, and find a productive way of dealing with psychological stress. This will help treat the cortisol problems that cause visceral fat accumulation, and also decrease cravings for sugar and junk food.

Insulin management. This is a tricky beast, and it’s not necessary to go very low-carb for metabolic health, but cutting out refined sugars and high levels of any kind of sweetener (yes, including the “natural” ones like honey and maple syrup) can help. Here’s a practical guide to restoring carb tolerance and insulin sensitivity.

(If and only if you’re getting enough sleep) Exercise. Exercise (particularly higher-intensity exercise) is particularly effective against visceral fat, even when it’s not combined with dieting.

Essentially, the point is to address the hormonal and metabolic factors that drive visceral abdominal fat accumulation, instead of just trying to eat less and move more without getting to the root of the problem.

Visceral belly fat is dangerous, but it’s not always visible from the outside, and a layer of subcutaneous belly fat can be perfectly fine, especially on women who have a basically hourglass shape but a layer of jiggly stomach fat that hides their abs.

Fortunately, treating the dangerous visceral belly fat doesn’t involve anything much different from what you were already doing on Paleo: a diet, lifestyle, and exercise routine that will normalize hormones like cortisol and insulin and reverse the hormonal factors that drive belly fat accumulation in the first place.