Egg yolks are the perfect example. All the nutrition in an egg is in the yolk, but way too many people still insist on buying egg whites and throwing the yolks away. Here’s why the yolks are actually the best part – if you’re going to toss anything, toss the white, and keep all the nutritional goodness in the middle.

Egg yolks are full of important nutrients, especially ones from free-range hens.

Egg yolks contain almost all the vitamins and minerals in the egg. There’s just no comparison. Here’s the data for 3 egg yolks compared to 3 egg whites (Why 3? Because 3 eggs is around what most people should be eating at a single meal).

*Yes, there are problems with the RDA. But at least it gives you a meaningful estimation – 0.9mg of Vitamin B6 means nothing to most people.

Egg yolks are more nutritious than the whites in every category but one (riboflavin).

Free-range eggs have 3-4 times the Vitamin D of eggs from hens kept indoors.

Other Good Stuff in Egg Yolks 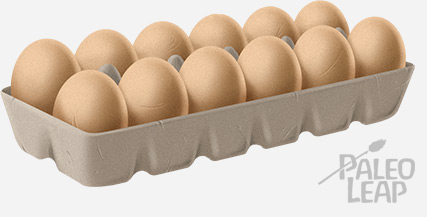 Egg yolks also have antioxidants – that’s what gives them such a bright yellow color. This review goes over some of the compounds in egg yolks with antioxidant activity. Vitamin E and selenium were listed in the table above, but eggs also contain carotenoids, which give them their yellow color. The carotenoids in egg yolks are more bioavailable than the carotenoids in vegetables, because they come packaged with fat.

Another antioxidant in egg yolks, phosvitin, may help reduce any problems with oxidizing the iron in the yolks. Iron is an important mineral, but it’s very vulnerable to a kind of damage called oxidation (if the iron is outside your body, you can see this damage in the form of rust). Inside your body, oxidation can make the iron inflammatory – that’s why some people give blood to improve their health, or avoid eating a lot of iron. But the iron in egg yolks is safe from oxidation because it comes packaged with phosvitin.

Egg Whites: They Have Some Protein, and That’s Nice

It’s not like egg whites are bad for you. They do have some protein, and that’s good – protein is an important part of a healthy diet, especially for weight loss. But egg whites don’t have much of anything besides protein.

Also, egg whites have most of the compounds that give people bad reactions to eggs. The proteins in egg whites can be irritating or problematic, especially for people with autoimmune diseases, and cooking doesn’t always completely denature them. If you can handle the potential antinutrients in the white, great, but they’re not right for everyone.

Since the nutrient content of free-range eggs is so much higher, it’s worth the trouble to find them – but you’ll have to fight through a bunch of misleading labels. Here’s how to interpret them:

Pasture-raised, free-range eggs are best, but even conventional eggs will be nutritious. Just make sure to eat the yolk: that’s where most of the good stuff (not to mention the flavor!) is lurking.

Here are some recipes to get you started!