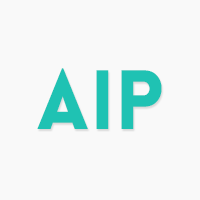 Please remember: Paleo Leap is not a doctor, and none of this is a substitute for medical advice. Please take everything in this article as information that you can discuss with a doctor, not a “cure” for any disease.

The human immune system is truly astonishing. From our skin to our T-cells to our bone marrow, it protects us from constant invasion attempts by billions of viruses, bacteria, and fungi every day, and it can take an enormous amount of beating before it gives in.

Unfortunately, with a little help from genetics, the modern world can deliver all that beating and then some. Sometimes, the result is simply a disease we can’t fight off, like the antibiotic-resistant superbugs invading hospitals around the world, but deadly diseases aren’t anything uniquely modern. Mother Nature does just fine coming up with pathogens all on her own (smallpox comes to mind). What’s really special about the modern environment is the rise of autoimmune diseases – disorders that cause your immune system to attack you as if you were the foreign invader. 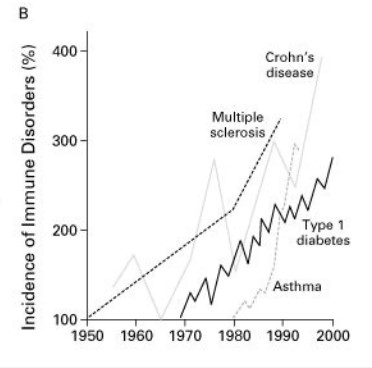 Clearly, something is going on! The only problem is that nobody knows exactly what: we don’t know exactly what causes autoimmunity, and we don’t actually have cures for any autoimmune diseases, just various ways of managing the symptoms.

If you’re suffering from an autoimmune disease, that’s the first thing to remember: there are no easy answers, and anyone who’s trying to sell you one is lying. But the chart strongly suggests that there might be something unique to the modern world that triggers autoimmune conditions. Is this something we can approach from an evolutionary standpoint? Take a look at what we do know (or at least, what we think we know), and what it might imply in the real world.

One of the immune system’s primary tasks is to distinguish between self and non-self. Non-self materials (like viruses and bacteria) need to be targeted and destroyed before they make you sick. Substances that are part of you (your own body) need to be preserved. In autoimmune conditions, the immune system’s identification of self and non-self fails. Your own body gets caught in “friendly fire” as the target of the immune response. This can affect the body as a whole, or any individual body part.

Nobody knows! But we do have a basic model and at least some pretty good guesses.

Genetics are interesting, but they haven’t changed that much since the 1950s – not enough to explain the alarmingly spiky chart lines in the graph above. So if we’re trying to explain the recent rise in autoimmune disorders, we’re left with #2 and #3. And then the million-dollar question becomes: what kinds of “environmental triggers” could cause so many people’s immune systems to go so completely haywire? And what does the gut have to do with it?

First, let’s start with #2 on the list above: environment. What is it about the modern environment (food, lifestyle, or other factors) that may contribute to autoimmunity?

This one you’ve probably heard of before. Simply put: we’re too clean. Our water is too sterilized; our food is too sanitized; we wash our hands too much; we don’t play in the dirt enough. Our bodies evolved to deal with a certain amount of dirt, a high number of early childhood infections, and a relatively large parasitic load. Without an early and consistent chance to flex its muscles, the immune system never really learns how to respond to its environment, and it gets a little neurotic, overreacting to nonthreatening stimuli (like pollen and cat dander: the hygiene hypothesis also accounts increasing allergy rates) and even to our own bodies.

On the other hand, some infections can also trigger autoimmune diseases, particularly thyroid problems. So it’s not quite as simple as being a little less clean for better health.

It’s unlikely to explain everything, but the hygiene hypothesis probably has at least a little truth to it. The problem is that it doesn’t really suggest a solution: we can’t exactly go around infecting children with tapeworms and measles on the off-chance that it might protect them from thyroiditis later on!

Closely related to the hygiene hypothesis is the gut flora hypothesis. As with all things gut flora, the research here is still very new: scientists have only recently started to pay much attention to intestinal bacteria at all. But there’s some evidence that people with autoimmune disorders may have one or both of these problems:

This study even suggests that gut flora differences may be one of the reasons why autoimmune diseases are so much more common in women. And this study reported a potential role for probiotic therapy in treating autoimmune disorders, although probiotics didn’t show an effect in all groups of patients.

This article takes a look at the evidence that Vitamin D may have something to do with autoimmunity.

This makes sense from a Paleo perspective: we evolved to be outside a lot more, so with the increase in indoor jobs, most people are now Vitamin D deficient. It’s not clear how this could explain the sharp rise in autoimmunity in the past century (after all, we were working indoor jobs long before the 1950s), but it’s an interesting aspect of the research, and Vitamin D has so many other benefits that it deserves our attention anyway.

Other nutrients are also related to autoimmune disease, although the relationship is often complex. For example, iodine deficiency can trigger thyroid problems, but an overdose of iodine can also be dangerous. So nutrients and autoimmunity are interesting, but this is an area to approach very cautiously.

A whole host of other environmental triggers have been associated with autoimmune disease, and some of them have at least preliminary explanations of why the association may indicate something more than chance. For example, this editorial summary in Nature details how certain types of environmental toxins (dioxins and other aromatic hydrocarbons) may be connected with the development of autoimmune disease.

Again, this jives with the theory of an evolutionary mismatch. It’s likely to be a piece of the puzzle, but probably not the whole explanation.

Possibly the most important way that the modern diet contributes to autoimmune conditions is by causing leaky gut syndrome (or “abnormal intestinal permeability” in scientific terms). This sounds like a ridiculous made-up problem, but it’s actually a real issue, and you’ll find references to it in real scientific literature (e.g. this study), not just blogs.

Here’s how leaky gut works: in a healthy person, the gut is a closed tube. There’s a very complicated gut barrier regulating what passes between the gut and the body, to make sure that nutrients get in while everything else stays out.

Food toxins in the modern diet, especially toxic proteins like gluten and other lectins, throw this gut barrier off its game. These proteins look like simple sugars, so the gut barrier happily lets them on through. On their way through, they give the gut lining a kick in the ribs, damaging the intestinal wall and making it easier for other foreign particles to leak out. But as soon as they’re in the bloodstream, the immune system realizes that they aren’t actually harmless, and attacks them.

So far, so bad. But these proteins aren’t done tricking your body yet. The lectins that can permeate the gut lining often appear to be very similar to proteins that are part of your own body (this is called molecular mimicry). So when the immune system mounts a defense against them, that defense can end up attacking your own cells as well.

That was a very simplified explanation; if you want to get the science-heavy version of this, you can go here. This is still in the preliminary stages of research, but there’s an increasing amount of evidence pointing the finger at intestinal permeability as a major contributory factor to autoimmune disease, and gut irritants in the modern diet aren’t doing your gut any favors in that regard.

So now you know the problem: autoimmune diseases have many contributing factors, and problems of the modern diet (like nutrient deficiencies and gut irritation) are among them. But what specific dietary changes can help improve this problem?

Fortunately, a lot of very smart people have been asking themselves that same question. Paleo is a good start, but in addition to non-Paleo foods like grains (especially wheat), they’ve identified a list of several foods that are technically “Paleo” but can also cause autoimmune flares:

On the other hand, for people who do struggle with autoimmunity, the stricter elimination can be very helpful. The best place to read more about these foods (including why they’re eliminated on an autoimmune diet) is here: Dr. Sarah Ballantyne has developed an incredibly helpful website and even written a book all about Paleo and autoimmune disorders. 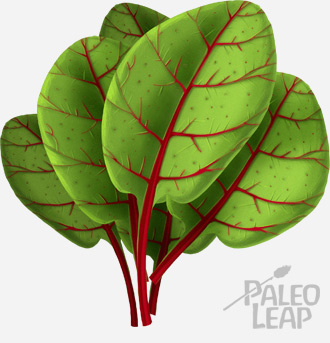 Another Paleo-based approach is the Wahls protocol, created by Dr. Terry Wahls who sent her own Multiple Sclerosis into remission with a modified Paleo diet. But instead of focusing on what foods to eliminate, Dr. Wahls is most famous for what foods she promotes – specifically vegetables. Lots and lots of vegetables. 9 cups a day, to be precise, broken down into:

Dr. Wahls also stresses sea vegetables like seaweed and algae, probiotics, bone broth, and the importance of Omega-3 fats. And she insists that the best way to get all these nutrients is from whole foods, not supplements.

She also works with her patients to reduce or manage stress, using meditation and other approaches. As everyone keeps saying (because it’s always true), diet is just one part of health!

These recommendations are designed specifically for Multiple Sclerosis, to provide the brain with the nutrients it needs for optimum health. But many people with other autoimmune diseases have also experimented with them, with promising results. And there’s certainly not much to object to here, even for people who don’t have an autoimmune condition.

Putting it All Together: Will This Help Me?

Autoimmune diseases are very complicated, and there’s no one answer. But the research we have suggests some safe and minimally invasive experiments to try and see if they help, always bearing in mind that diet advice on the internet is not a substitute for talking to a doctor:

None of this will cure an autoimmune disease. At this time, we have no cure for autoimmune diseases. But an autoimmune-friendly diet can be a big step towards knocking out two “steps” in the development of autoimmunity: environmental triggers and a leaky gut. And at the very worst, it won’t do anything – there’s nothing here that’s dangerous, so it’s a safe and potentially life-changing intervention to discuss with your doctor.