“It’s a marathon, not a sprint. Crash diets don’t work; do something sustainable.”

How many times have you heard that advice? In general, it’s true. Long-term weight loss (and especially weight maintenance, which is really the heard part) means getting into good habits that eliminate the need for “willpower” from day to day (“willpower” runs out fast, but habits stick around). If weight loss is a marathon, the only way to get to the finish line is to go slow and steady. Try to sprint and you’ll just get winded and burn out in half a mile.

But the problem with the marathon comparison is that marathons typically last between 3 and 6 hours. Weight loss and maintenance lasts years. Sometimes decades.

When it comes to a multi-year effort like weight loss, instead of comparing it to a single a marathon, compare it to a marathon runner’s entire running career. In this new analogy, training to a marathon level is the weight loss. The 10+ years after that of maintaining fitness, training for more marathons, and getting faster is weight maintenance. And during those years, lots of marathon runners do runs faster than their marathon pace. These runs help build stamina and increase strength. They’re useful, even if they’re not done all the time.

In the same way, a successful weight-loss plan can benefit from some periods of temporary harder or extreme effort. The key is that the “extreme” effort has to be part of a long-term plan. Impulsively swearing to never eat carbs again because you feel fat and hate yourself isn’t a long-term plan, and it’s likely to backfire. The idea here is to…

The green line is what you want: strategic use of extreme effort, integrated into a long-term plan that doesn’t rely on extreme effort all the time.

What’s the evidence that a short period of harder effort can help? There are actually several studies that have done this, typically on people who are extremely obese to start with (aka not just looking to lose “the last 5 pounds”).

Take a look at this study . To quote:

So in other words, an extreme and long-term unsustainable diet can actually be a good start to a weight-loss program, especially in people who start out severely obese, if there’s always a plan in place to transition to sustainable habits.

Here are two more reviews (one , two) backing that up. Basically, what this research suggests is that there’s room for occasional “sprints” in a long-term weight loss plan, provided the sprinter is really clear that these ate temporary efforts and has a plan for a different long-term strategy.

Let’s take a closer look at the nitty-gritty of setting this up.

Most meal replacements aren’t Paleo at all – they’re just full of junk. It might be low-calorie junk, and it might cause weight loss very effectively for that reason, but it’s not doing anyone’s long-term health any favors. Also, most of these diets are really focused on counting calories, and Paleo discourages calorie-counting (even though calories do ultimately determine weight loss, counting calories isn’t the best way to get there).

So how could you do a diet “sprint” in a Paleo way?

For people who are obese to begin with, one option is a protein-sparing modified fast (PSMF). A PSMF is basically the Paleo version of those commercial liquid diets, but with a lot more good stuff and without all the junk. The point of a PSMF is to give you the hormonal/metabolic benefits of fasting while keeping your muscle tissue and preventing nutrient deficiency. You can read all about PSMFs here.

For people who aren’t obese to begin with, a PSMF isn’t a great idea. People who don’t already have massive reserves of stored energy have a lot less wiggle room for extreme energy restriction without dangerous side effects. For this crowd, a 30-day strict Paleo challenge might work better. For most people, a life of 100% Paleo, no exceptions ever just isn’t sustainable in the real world. That’s fine and there’s absolutely room for flexibility in the Paleo life, but a 30-day (or 21-day, or however many days) challenge where you really focus on eating absolutely within Paleo guidelines can be a decent “sprint”

How Long to “Sprint”

This study is interesting. The researchers divided obese patients into one of two groups:

The total amount of time on the rapid weight-loss diet was the same, but in one group it was all in a chunk and in the other group it was broken up.

At 14 weeks and 26 weeks, weight loss was basically similar, and with fewer side effects in the intermittent group. So in other words, even very short “sprints” seem to work about as well as longer sprints. And they don’t raise the same concerns about possible nutrient deficiencies, since the period of extreme eating is so much shorter.

Setting Up a “Sprint”

Pick your diet plan and set a timeline. For a strict Paleo challenge, this would be however long the challenge is. For a more extreme diet, pick something you can live with or something that fits your life schedule (got 2 weeks to focus on your weight between semesters at school? Perfect!)

Whatever your planned timeline is, add an “I hate this too much” exception where if you just can’t stand the diet, you can call it an experiment that didn’t work out and go back to regular Paleo with no guilt-binging on the rebound. It’s not a failure: cutting the experiment short for intolerable misery was always part of the plan.

Then write out – in actual writing – what you plan to do after the sprint. How will you transition back into a way of eating that you could do in the long term? Are there any new habits that you want to set?

A tip if you’re going the PSMF route: this study found that gradual carb reintroduction helped weight maintenance more than just adding carbs back in all at once. So slow reintroduction could be a useful part of your “transition to a long-term strategy” plan.

It’s Not for Everyone

This approach just won’t ever work for some people, and that’s fine. 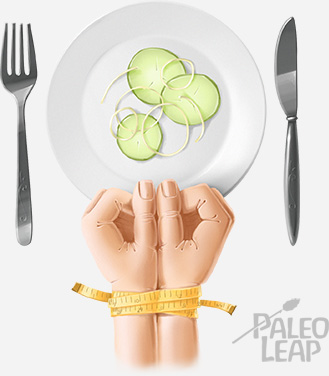 There are definitely people who don’t benefit from this approach – it’s not for everyone and there are plenty of ways to lose weight without it.

Temporary very-low-calorie diets are reasonably safe for people who are obese to begin with (provided you’re not doing them with some nutritionally deficient meal replacement formula). But that doesn’t make them pleasant and for some people, the misery just isn’t worth the potential benefits.

This is not advice to go on an extreme diet permanently or for the wrong reasons. Guilt, shame, self-hatred, or the desire to punish yourself for being “too fat” are not good reasons to try an extreme diet. Crash diets in the usual sense – diet, burnout, falling off the wagon, weight regain – are great for making people miserable and not much good for anything else.

The point is to use an all-out effort in a planned, controlled way, always bearing in mind that it’s going to be a temporary sprint in the context of your metaphorical marathon training. The extreme diet should stop before you get to the point of burnout/”I don’t give a @#$%” rebound binge.

If you know you’ll just get sucked into the cycle of crash dieting and rebounding, don’t do it. If you know it won’t be healthy for you, don’t do it. But if this all sounds kind of interesting – say you have a period in your life coming up where you have space to focus on weight loss and you might like to try a harder effort – it’s worth considering.