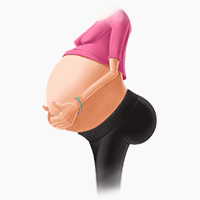 Why do some women develop diabetes during pregnancy? And if gestational diabetes is “just” a disease of pregnancy and goes away after birth, why do so many of those women go on to get Type 2 diabetes later in life? As it turns out, diabetes of pregnancy might be a red flag for pre-existing, long-term metabolic problems. It’s not an issue that suddenly appears out of the blue during pregnancy for no reason. And it’s one more reason for everyone to take care of their diet, even if they’re healthy right now.

What Is Gestational Diabetes?

Women with gestational diabetes usually don’t get any symptoms, but they can sometimes get symptoms of diabetes like a frequent need to pee, more infections, feeling thirsty all the time, fatigue, vision problems, and nausea.

If you’re a man and you only need information for yourself, your need-to-know ends here. You might learn some very revealing things by asking your mother if she had gestational diabetes while she was pregnant with you – if she did, managing your own blood sugar will probably be more of a challenge, but at least it’s good information to have.

This study has a really detailed explanation. You can basically sum it up as “pregnancy hormones on top of pre-existing chronic insulin resistance.”

The hormone insulin is responsible for blood sugar control: when your blood sugar (glucose) gets too high, your body produces insulin, which takes the glucose out of the bloodstream and shuttles it into other cells. So far, so good. But during pregnancy, something happens that messes that up.

The details of how that happens are still unclear, but the most popular theory is that pregnancy hormones interfere with insulin receptors in your cells. This increases insulin resistance, so there’s no way for insulin to remove glucose from the bloodstream.

It’s normal for pregnant women to develop some degree of insulin resistance. In most women, the pancreas can compensate by just making more insulin. This is the classic “if they don’t hear me I’ll just shout louder” technique. Up to a point, it works, but in some women, the insulin resistance gets so bad that the pancreas just can’t compensate. Insulin is shouting, but your cells have gone completely deaf. Blood sugar just keeps getting higher, and eventually the woman crosses the line between “high blood sugar” and “diabetes,” and she gets a diagnosis of gestational diabetes.

So what kinds of diet and lifestyle interventions are effective for preventing and/or treating gestational diabetes?

Exercise is one of the most powerful interventions around for reducing insulin resistance, and it has consistent benefits for women with gestational diabetes.

A review of several different studies found that exercise during pregnancy is protective against gestational diabetes. Here’s another review with the exact same conclusion. This one found that physical activity alone was actually more effective than diet alone (although the best was obviously to get both).

Exercise is also great for preventing or reducing insulin resistance in non-pregnant people (both men and women). It’s one of the simplest, most effective ways to manage insulin levels.

It’s really great that exercise works so well, because diet is one big question mark. Gestational diabetes just confirms what we already knew about diet and metabolic health: it’s complicated, and there’s a lot of individual variation.

Studies on pregnant women who already have gestational diabetes are very mixed. A Cochrane review concluded that:

“studies…are too small for reliable conclusions about which types of dietary advice are the most suitable for women with [gestational diabetes]…we did not find any significant benefits of the diets investigated.”

Although to be fair, another review found that a diet low in refined carbs might have notable benefits for women with gestational diabetes.

What about women after giving birth? Is there anything that helps stop them from progressing to type 2 diabetes? Here’s a review:

“Lack of methodologically robust trials gives limited evidence for the success of lifestyle interventions in women with prior [gestational diabetes].”

What about preventing gestational diabetes? Here’s another Cochrane review:

“Results …suggest no clear difference in the risk of developing [gestational diabetes] for women receiving a combined diet and exercise intervention compared with women receiving no intervention. However, the ability to draw firm conclusions was limited by variations in the quality of trials…Based on the data currently available, conclusive evidence is not available to guide practice.”

These studies (and also this historical review) suggest that the real trick might be lowering refined carbs, not necessarily an ultra low-carb diet overall. But there’s really a dire need for better studies and until we have them, individual tolerance really has to rule the day. “Do what works for you” is kind of a dietary cop-out, but in this case, it’s really the only thing anyone can say.

A Paleo diet low in refined carbs is a good basic starting point, and tentatively supported by the studies we have. After that, maybe experiment with carb levels and other diet strategies to see what works for you.

Gestational diabetes is one more reason for healthy people to eat well and get enough exercise. The evidence so far suggests that it’s not a problem caused by pregnancy. It’s a problem caused by pregnancy in the context of underlying insulin resistance. The best defense is regular physical activity and a diet that supports good metabolic health, even for people who “look healthy.”