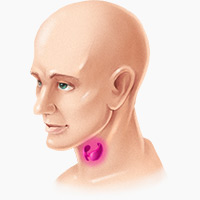 It’s true that hyperthyroidism isn’t as common. But it’s still serious and it does affect a lot of people.

All of these are ultimately caused by having too much thyroid hormone, because thyroid hormone is a big regulator for metabolic rate. Too much thyroid hormone is basically forcing your metabolism and your whole body to run too fast and too hot. This is really uncomfortable for the person living with it (it’s not like a magic ticket to easy weight loss, unless you want to lose weight by feeling awful all the time) and it can cause heart failure, brittle bones, and vision problems down the line.

Hyperthyroid can have all kinds of causes. The most common is Graves’ disease, an autoimmune disease. Other infections can also cause hyperthyroid. Taking too much supplemental iodine or eating a diet extremely high in iodine can do it, too.

Links between Diet and Hyperthyroidism

Diet can also be helpful for minimizing the damage of hyperthyroidism, especially bone loss.

Seaweed is a rich source of iodine.

Iodine is a nutrient found mostly in sea foods. Fish has a lot, and sea vegetables are overflowing with the stuff. Iodine is important for all kinds of things, especially thyroid health. Basically, you need it to make thyroid hormone, so if you’re not getting enough iodine, you won’t be able to make enough thyroid hormones and you’ll end up being hypothyroid. Deficiency of iodine used to be a massive public-health problem in the US until we started putting iodine in the salt, and now it’s very rare to see someone with mental retardation or goiter (visibly swollen thyroid gland) from iodine deficiency.

But too much iodine isn’t necessarily better.

There have been some disturbing case reports of people getting hyperthyroid problems from eating way too much seaweed and other iodine-rich foods. Case reports are official medical reports of things that happened to individual patients. They’re at the bottom of the medical evidence tier – they’re basically really well-documented and professionally-confirmed anecdotes. But they’re still interesting.

Iodine deficiency early in life can make people more vulnerable to iodine-induced hyperthyroidism later on. This can cause big problems in developing countries, where a lot of people have pre-existing iodine deficiencies and governments or NGOs start an iodine supplementation scheme. Using high-dose iodine supplements for this is also associated with a higher rate of hyperthyroidism.

In the interests of not being alarmist: this isn’t a one-time effect. Almost all people have a temporary change in thyroid hormone levels if they eat a huge amount of iodine at once. It’s called the Wolff-Chaikoff effect, after the doctors who discovered it, and if it’s just a one-time thing, it’s no big deal. But chronically eating a high level of iodine can be dangerous.

Want something more substantial than a case study? In this study of 161 patients, patients with Graves’ disease had a much higher rate of Celiac autoimmunity than the general population.  Here’s another one, with 115 patients. Celiac disease 4.5 times as common in patients with Graves’ disease as it is in the general population.

If you have an autoimmune hyperthyroid disorder, screening for Celiac autoimmunity might be well worth your time – and gluten elimination might be very helpful.

To wrap up dietary factors in hyperthyroid, here’s a mixed bag of studies that may be interesting.

This study makes it look like a vegan diet is protective against hyperthyroidism, but if you actually read the full text of the study, there’s a huge confounding factor: sex. Women get thyroid diseases much more often than men. So as the percentage of women in the group increases, the percentage of thyroid problems in that group will also increase. A group with 80% women will have more thyroid problems on average than a group with 20% women. In that study, the percentage of women was lowest in the vegan group, so of course the rate of hyperthyroidism was lower. The authors couldn’t come up with any solid link between veganism and thyroid health, so demographics seems like the most likely explanation here.

This study is also interesting. The researchers surveyed people in Pakistan, and found that the people who ate the most turmeric, milk, ghee, and chilies had the least hyperthyroidism. It’s an association and nobody can tell you if it’s causal or not, but turmeric in general is pretty good stuff, and so is ghee!

If the cause of your hyperthyroidism is diet (e.g. excessive kelp or supplements), then diet will obviously be a big part of the cure. If you have autoimmune hyperthyroidism, eliminating gluten might be helpful. But diet alone can’t cure hyperthyroid and nobody is claiming that it can: obviously, in either case your first stop should be a doctor’s office.

There’s one more thing to note about eating for hyperthyroidism : diet can help prevent the bone thinning that excess thyroid hormone often causes. If you have hyperthyroidism, bone health should be a top prority. Eating for healthy bones and teeth means…

Read up more on eating for bone health here. Of course, this isn’t a cure for the underlying thyroid problem, but it can help reduce the long-term symptoms.

Hyperthyroidism often gets ignored next to its cooler and more popular cousin, hypothyroidism. But hyperthyroidism is also important, and diet does have an effect!

In terms of diet, finding the sweet spot for iodine is a good bet – deficiency is obviously bad, but there’s such a thing as too much. Gluten and gluten autoimmunity may also be one big factor that contributes to thyroid autoimmunity, so if you have hyperthyroid problems, gluten is a problem to watch. If you have hyperthyroidism , taking care of your bones is also important even after treatment, and diet can help with that.