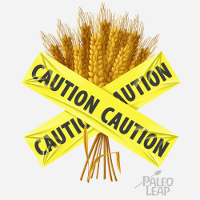 Celiac Disease is an autoimmune reaction to the protein gluten. It’s pretty rare in the general population, but surprisingly common among people who eat Paleo. Maybe that’s just because Paleo is gluten-free anyway, so all the recipes are Celiac-friendly by default. But Paleo also has benefits for Celiac Disease above and beyond just eliminating gluten.

A surprising number of people with Celiac eliminate gluten but don’t actually heal just from that. A gluten-free diet can prevent further damage to the gut, but a Paleo approach might help treat pre-existing gut damage nutrient malabsorption problems, and really encourage total healing.

First of all, a bit of definition. Celiac Disease is an autoimmune reaction to gluten, a protein found in wheat, barley, and rye. The numbers vary, but only a small percentage of people have Celiac Disease – the usual figure is around 1-3% of the population. The only way to diagnose Celiac Disease with any accuracy is to go to a doctor.

You can’t diagnose yourself with it, and just “having a bad reaction to gluten” doesn’t mean you have Celiac Disease. There are many other reasons why someone might react to wheat and/or gluten. Non-Celiac Gluten Sensitivity is a thing. So is wheat allergy. So is FODMAP sensitivity. All three of those could give someone a bad reaction from eating wheat, but none of them are the same thing as Celiac Disease.

Celiac Disease can cause all kinds of horrible symptoms if it’s not treated. To name a few: dangerous weight loss, horrible diarrhea or abdominal pain, skin rashes for no obvious reason, brain fog and/or headaches, and nutritional deficiencies. But the good news is that it’s basically manageable and most people who have it can live a normal life. The treatment is total gluten elimination – for most people who can actually manage to stick with it, it works pretty well. Except that…

If a person with Celiac Disease completely eliminates gluten, then they won’t be doing any additional damage to their gut. But just giving up gluten doesn’t actually fix the pre-existing damage from however many years of eating gluten before.

The most common cause is accidental gluten exposure (hidden in soy sauce, restaurant food, salad dressing, etc. etc.) but that doesn’t account for all cases. Other causes include Irritable Bowel Syndrome, lactose intolerance, SIBO, and other digestive system disorders.

(As a side note, if you’ve heard of “gluten cross-reactive foods,” read this before you eliminate anything from your diet. Of course, it’s very possible that a person could have Celiac Disease and also, unrelatedly, be sensitive to any number of these foods, but there’s no convincing evidence that any of them “act like gluten” or “trick your body into thinking you’re eating gluten.”)

In other words, Celiac Disease can coexist (and contribute to!) many other different types of gut problems. And just getting rid of gluten doesn’t actually solve all the non-Celiac problems that might be causing similar symptoms. That’s where Paleo comes in.

Paleo is all about gut health in general, not just gluten as the Big Bad Guy. So eating Paleo can help heal the pre-existing damage from years of living with Celiac Disease, and help address other, non-Celiac problems that might be exacerbating the Celiac symptoms.

Paleo is designed as a gut-healing diet out of the box: the point is to start by removing potential gut irritants like sugar and industrial seed oils that cause inflammation, and then support healthy gut function with foods that help you heal, like fermented foods, bone broth and antioxidant-rich vegetables. (If you’re totally new to Paleo, start here.for an overview of the diet, and here to explore how Paleo can help with gut health). All of this is built into the basic Paleo template, so there’s no need to specifically worry about tweaking Paleo for gut healing. Paleo is already pre-tweaked for gut healing!

For even more of a boost, try…

Probiotics. The gut microbiome gets completely out of whack in people with Celiac Disease and gut flora problems may even contribute to symptoms. This review went over some therapies for Celiac Disease that aren’t a gluten-free diet. Some of these are experimental or still in the works, but the review did touch on a few things that you could do right now, especially taking probiotics. We don’t have enough studies to show which particular bacteria are best, but Bifidobacterium infantis and Bifidobacterium longum have both shown good results in human studies.

(Maybe) Prebiotics. Prebiotics are fibers that feed your gut flora. A gluten-free diet is low in some prebiotics, notably fructans and inulin. For some people, this could be starving bacteria that they need, and causing gut flora problems. Adding fructans and inulin from non-wheat sources (like prebiotic supplements) might be helpful.

But for other people, it could be just the opposite. Fructans and inulin are both FODMAPs, and if you’re suffering from something like Irritable Bowel Syndrome or SIBO on top of Celiac Disease, putting more FODMAPs into your diet could be totally unhelpful.

Another way Paleo can be helpful is by giving you a leg up with absorption issues. Nutrient deficiencies are very common in patients with Celiac Disease, not necessarily because the patients’ diets are bad, but because they’re not absorbing the nutrients they eat. Regardless of how much iron you put in your mouth, if you can’t absorb it, it’s just going out the other end without doing you any good.

The obvious first strategy is to fix the underlying gut problem. But even after that, your body has a lot of playing catch-up to do. Just like a gut damage, nutrient deficiencies often persist even after a person starts eating a gluten-free diet.

Nutrient-dense foods to the rescue! Here’s a list of the most common nutrient deficiencies in Celiac Disease, with Paleo foods that supply those nutrients and tips for increasing nutrient absorption:

Healing from Celiac Disease is more than just eliminating gluten. Other Paleo-based strategies can help – try probiotics, possibly prebiotics, and nutrient-dense foods with an eye on absorption. Of course, none of this is any substitute for a doctor, but if your symptoms just won’t go away even on a strict gluten-free diet, it might be a place to start.