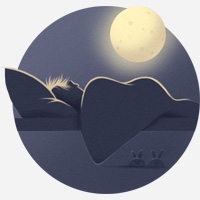 Here is a very abbreviated “cheat sheet” version of the MEQ:

If you want something more precise, you can see the full 19-question form here, including instructions for scoring yourself.

Chronotype can change over time. Most children are early birds, but as teenagers they naturally start preferring to wake up later and to bed later. As adults, most people steadily shift back to an earlier pattern, and old people often have an extremely early preference.

How Chronotype Affects your Health

Chronotype is important, because your chronotype can have serious effects on your risk of depression, mood disorders, obesity, diabetes, and other chronic diseases. That might sound totally overblown and alarmist, but there’s a huge amount of evidence supporting it. The key link is sleep. Poor sleep wrecks your health, and a chronotype out of sync with your actual schedule is a major factor in sleep deprivation.

Sleep deprivation is one of the biggest health risks of the modern lifestyle. It’s arguably more important than diet. Sleep deprivation and sleep fragmentation (lousy sleep) is a major risk factor for type 2 diabetes. It’s associated with cardiovascular problems like higher cholesterol and higher weight. It’s a big player in non-alcoholic fatty liver disease, and it’s also a major driver of obesity.

So what does this have to do with chronotype? If your chronotype doesn’t fit your actual schedule, it can really wreck your sleep. In practice, this means that evening chronotypes (people who prefer to wake up later and go to bed later) are constantly getting the short end of the stick.

In the US, work and school schedules force most people into an earlier chronotype than their body actually wants. Most people with chronotype mismatches either can’t or don’t go to sleep earlier to compensate. They just get less sleep.

It starts in high school Most people in their late teens naturally have an evening chronotype, so they have trouble falling asleep until late. But then they typically have to get up early for school. This creates a chronotype mismatch. This review found that the conflict was shorting them of 30-77 minutes of sleep every night. Just delaying school start times a little gave the students a lot more sleep, and the results are even more dramatic when start times are delayed until the afternoon.

Work schedules aren’t much better. The average working person has to wake up between 6:30 and 8:00 on workdays, which is too early (judging by chronotype) for 65% of the population! But being dragged out of bed too early every day doesn’t actually make you a morning person. These people are still naturally more alert in the evening, and their bedtimes don’t adjust to match their wake-up call. We’ve basically invented a typical work schedule that puts the majority of the population at a much higher risk for chronic sleep debt.

Even if you’re getting enough hours of sleep, a sleep schedule out of sync with your chronotype also reduces sleep quality.

Evening chronotypes are hardest-hit by typical work schedules.  As you might expect, evening chronotypes typically have the worst sleep. And the health problems that come along with that sleep deprivation are scary:

Sleep is powerful. Evening chronotypes aren’t seeing all these problems because there’s something inherently bad about getting up later and going to bed later. The problem is basically a social timetable that forces evening chronotypes into a morning-chronotype pattern.

OK, so What Can I Do About That?

So far, it’s all been pretty dire. The modern world is totally out of sync with the biological sleep preferences of huge numbers of people. If you naturally have an evening chronotype, you’re at a higher risk for sleep disruption and sleep deprivation, which gives you a much higher risk of health problems like diabetes, cardiovascular disease, and obesity. But a risk factor is not a life sentence. This is something you can plan for and work around.

The ideal solution would be to have a work/school schedule that aligns with your natural chronotype. There’s actually some evidence that extreme evening types can reduce their risk of chronic disease and get more sleep by working night shifts more closely aligned to their chronotype. If you’re at the very far end of the evening schedule, that might be ideal.

If you Can’t change your Work Schedule

But for a lot of people, that’s just not realistic. Not all of us can change our work schedules at will. If that’s you, some research suggests that using a sun-spectrum lamp in the morning may help push your circadian rhythm a little earlier.

It might actually be possible to make up for lost sleep on the weekends: here are all the details on how to do that.

Sleep deprivation and low-quality sleep doesn’t increase the risk of diabetes and heart disease by some kind of black magic. All the mechanisms are familiar – insulin resistance, inflammation, higher rates of oxidative damage, higher levels of stress hormones, messing up hunger signaling in the brain. Evening chronotypes have a higher susceptibility to emotional eating, which is a completely unsurprising effect of sleep deprivation and lower mood.

These are tough challenges, but there are ways to at least partly address them with diet. Paleo gives you plenty of ways to proactively make up for that damage:

An evening chronotype basically reduces the amount of inflammatory food and simple sugar you can “get away with.”

It’s not fair. The modern world is really, really not set up for humans to be healthy, and in this particular situation, people with an evening chronotype are getting really slammed by a schedule that doesn’t work for them at all. All of this really goes to show just how important sleep is: even a relatively small misalignment between daily schedule and circadian rhythms can have a significant effect on your risk of chronic disease.

But even for the evening chronotype crowd, there are ways to work around that and minimize the damage. Intelligent strategies for recovery sleep on weekends, regular exercise, and a good diet can at least give you a leg up.