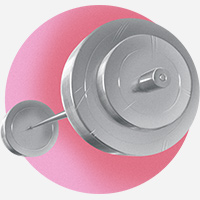 If you’ve ever used a treadmill, you’re probably familiar with the “fat-burning zone:” it’s a range of heart rates, and the idea is that you’ll burn the most fat if you keep your heart rate in that range. Many people probably assume that the “fat-burning zone” is where you burn the most calories (thus losing the most fat), but this isn’t actually true. “Fat-burning” actually means that of the calories you’re burning, most of them are coming from stored fat, rather than stored carbohydrate.

Don’t do well on a low-carb diet? Exercise can still help you bump up your fat oxidation.

So, there’s no magical heart rate range on the treadmill that automatically causes easy weight loss. Bummer. But here’s the good news: exercise is still a great way to improve your ability to burn fat for fuel. In fact, this isn’t just going on during the workout; regular exercise makes you a better fat-burner in general. And burning fat for fuel (fat oxidation, in technical terms) actually has some big metabolic advantages, whether you’re gaining weight, losing weight, or maintaining weight.

Exercise is especially great for improving fat oxidation because it still works even if you don’t restrict carbs in your diet (and if you do, it can give you an extra boost). Some people just don’t feel great on a super low-carb diet, but they can still get some of the metabolic pros of burning more fat for energy.

Humans naturally use a mix of fat and carbs for energy. When people talk about burning more carbs or more fat for fuel, it isn’t an either/or choice between fat or carbs. It’s a question of proportion. Almost nobody burns 100% fat or 100% carbs (even in ketosis, you’re still producing a little bit of glucose for your brain). But if you’re looking for weight loss, it can be helpful to shift your body to burn more fat as a percentage of calories.

Benefits of Fat Oxidation for Metabolic Health and Weight Loss

The short version: fat oxidation improves metabolic health and there’s a good amount of evidence that it helps with weight loss and maintenance.

(If you don’t know what insulin sensitivity is, this section won’t make much sense: read this first).

On the other hand, an impaired ability to burn fat reduces insulin sensitivity. It’s well known that people with obesity are less efficient at burning fat from their bloodstream (plasma fatty acids). This study even suggests that poor fat-burning ability (especially more fats stored in the muscles and liver) is the reason why so many people with obesity also have insulin resistance and diabetes.

Basically, burning fat for fuel is good for you, whether you want to lose weight or not.

Exercise Increases Fat Oxidation, Even After you Stop

Whether this guy is sprinting at max effort or casually jogging, his ability to oxidize fat is getting a boost.

There are all kinds of dietary and supplement strategies to get in the “fat-burning zone” (eating a low-carb diet is probably chief among them). But exercise is a really great strategy to add, because you can do it with any diet (no need to drop carbs super low) and the effects last long after you step off the treadmill. To borrow a term from the treadmills, exercise gets you in the “fat-burning zone” – and then keeps you there all day.

During a workout, the amount of fat you burn depends on how hard you’re doing. In general, low-intensity exercise relies more (not entirely, but more) on fat oxidation. As this study explains:

Here’s the cool part: working out at any intensity improves your ability to oxidize fat in general, not just when you’re exercising, and even if you aren’t cutting carbs.

For example, take this study. The researchers got 25 obese, nondiabetic subjects to do moderate exercise for 16 weeks. They were on a low-calorie diet, but it wasn’t low-carb. At the end of it, the subjects used more fat for energy all the time, not just when they were working out. Their insulin sensitivity also improved dramatically, mostly because of the improved fat oxidation.

Here’s another study, this time in older obese people who did 60 minutes of pretty intense aerobic exercise 5 days a week for 12 weeks. The exercise reduced insulin resistance by increasing fat oxidation during the whole day, not just when the subjects were exercising. These subjects were instructed to eat either their usual diet or a low-calorie diet, but at roughly 50% carbohydrate, these diets weren’t low-carb by any means. For improving fat oxidation, exercise works even when people eat lots of carbs.

And it works even if the exercise itself isn’t in the “fat-burning zone.” Take these two studies on high-intensity interval training (one, two). During the actual exercise, subjects used mostly carbs for fuel, because the intensity was very high. But both studies found that regular HIIT sessions improved fat oxidation in general, so the subjects burned more fat when they were just walking around. These studies didn’t change the subjects’ diets, so they just kept eating whatever they had been eating, proving again that special low-carb diets aren’t necessary for this effect.

As this review sums it up:

“…moderate-intensity exercise yields the most cumulative (during and post-exercise) fat grams used for substrate in the average individual. All intensities of exercise, however, promote fat oxidation during the post-exercise period. We suggest that it is the effects of exercise on 24-hour fat balance that are most important in understanding the role of exercise in the prevention of fat accumulation and obesity.”

There are some significant metabolic and weight-loss benefits to burning more fat and less carbohydrate for energy. A bunch of different studies have found that increasing fat oxidation improves insulin sensitivity and makes weight loss and maintenance easier.

Probably the most famous way to increase fat oxidation is by eating a low-carb diet, but exercise also deserves attention. Research shows that any kind of exercise – even if it isn’t in the “fat-burning zone,” increases fat oxidation long after the exercise is done. If you’re eating a low-carb diet, exercise can speed up the adaptation to the low-carb regime, and if you’re not, it’s a great intervention all on its own.