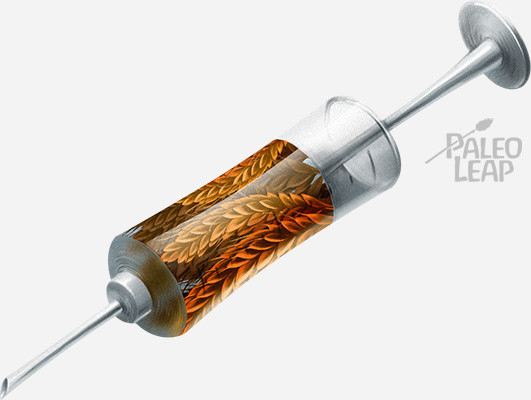 Welcome back to Part 2 of our food addiction series (you can find Part 1 here, if you missed it). Part 2 is all about dependence: can food in general or certain foods in particular cause a physical dependence that results in withdrawal reactions when you stop eating the food? Can they cause dependence in other ways, even without physical withdrawal reactions? What about food reward?

There’s a very fine line between a food and a drug – in fact, it’s questionable whether you can even draw a line at all. Several different kinds of foods contain chemical compounds that could potentially cause chemical dependence (with withdrawal symptoms when they’re discontinued).

One easy example is caffeine. Even without getting into caffeine-fortified foods and drinks, chocolate, coffee, tea, and several other whole foods contain caffeine, a stimulant that can cause chemical dependence. Any coffee-lover who’s tried to quit can testify that the physical withdrawal symptoms are very real: they typically include headaches and fatigue.

A more controversial topic is opioid peptides found in wheat and dairy. Wheat (specifically wheat gluten) does contain opioid peptides, which bond to opioid receptors in the brain just like the opiates in drugs like morphine and heroin. Dairy also contains casomorphin, another opioid peptide. Considering that opioid drugs cause chemical dependence, this suggests that wheat and dairy could also cause something similar.

It’s an interesting hypothesis. But it’s never been studied in humans, and only a very little bit in rats. It’s not clear whether or not the concentration of opioid peptides in these foods is enough to have any noticeable effect in actual people eating actual meals outside a lab. So until there’s actually some evidence that eating wheat and/or dairy foods causes any kind of opiate dependence in human subjects, file this one under “interesting, but premature.”

But that doesn’t necessarily mean that these foods can’t be addictive. Many drugs of abuse (cocaine, for example) have no notable withdrawal symptoms. But nobody would argue that it’s impossible to be addicted to cocaine, just because it has no significant physical withdrawal symptoms.

It’s easy to see how people could be psychologically dependent on food – if you’ve ever gone through a rough week where you leaned on “comfort food” just to make it through and feel normal, you’ve felt it yourself. But the problem with drawing a clear distinction between psychological and physical dependence is that your brain is also part of your body. Feeling good or bad is caused by physical changes in brain chemistry. Separating the physical from the psychological is a false dichotomy. And that leads right into…

A better-researched question that touches on elements of both physical and psychological dependence is the issue of brain chemistry and the possibility for certain super-pleasurable foods to have neurological effects that mimic drugs of abuse, regardless of whether they cause physical withdrawal symptoms like headaches or shaking.

Your brain is basically wired to run on a system of rewards and punishment. Without going into all the chemicals and neurotransmitters that control all of this, “reward” means something feels good, which makes you want to do it again. Extremely rewarding behaviors (sex, shopping, gambling, video gaming) or substances (opiates, cocaine, ecstasy, ice cream) can hijack that reward system, like this:

Similar neurological adaptations can come from non-drug stimuli – and one of them is food.

When it comes to foods, the super-rewarding stimulus comes from foods that are engineered to hit all of our reward centers in a way not found in nature. We’re naturally hardwired to like certain tastes (salty, sweet, umami), textures (crunchy, creamy), and nutrients (sugar and fat). You can read all about this in Michael Moss’ book Salt, Sugar, Fat if you’re curious, but essentially it involves crafting the perfect blend of flavor, texture, and nutrient value to get that super-rewarding effect (think: Oreo cookies, Hawaiian pizza, ice cream with waffle cone pieces…you can easily identify fat, sugar, salt, crunchy/crispy, and creamy textures in all of them).

Multiple studies have shown that hyper-rewarding foods can cause the same kind of changes in brain chemistry as drugs of abuse. This has been studied quite a lot in rats: in sugar binges, for example.

To quote from another study (also in rats):

“changes in reward homeostasis induced by cocaine or heroin is [sic] considered a critical trigger in the transition from casual to compulsive drug-taking…overconsumption of palatable food triggers addiction-like neuroadaptive responses in brain reward circuitries and drives the development of compulsive eating.”

There’s even some evidence in humans (and here’s some more, as a free full-text) in case you’re tired of reading about rodents getting fat on Oreos and cheesecake. But to make a long story short: yes, foods that are highly processed to be extremely palatable do seem capable of inducing the same kind of physical-psychological dependence as addictive drugs. Withdrawal symptoms fit the pattern of psychological dependence (lack of pleasure/”nothing else tastes good”/real food tastes “bland” or “boring”, anxiety, depression…) but they’re based in physical changes in brain chemistry.

In short: yes, there is a biological basis for physical and psychological dependence on food, with most of the evidence revolving around the potential for very highly palatable foods to hijack the brain’s reward system in the same way as drugs of abuse.

This doesn’t necessarily mean that eating these foods will cause addiction: for an addiction to be present, the person has to show some kind of compulsive or maladaptive behavior. In Part 3, we’ll explore the relationship between dependence and addiction: do people show behavioral addiction to food? Considering that some people “use” dependence-inducing foods without ever becoming addicted to them, can we really say that processed food causes addiction? What’s the difference between people who show addictive behavior and people who don’t?