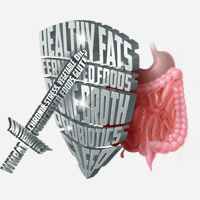 Chronic inflammation is generally bad news for all kinds of reasons, but if you’re having digestive symptoms like bloating, constipation, diarrhea, and GI pain, inflammation in the gut should definitely be on your health radar.

Note that this isn’t about the disease called Inflammatory Bowel Disease, which is a serious medical condition – if you have it or think you might have it, stop reading right now and go see a doctor. Gut symptoms are linked to inflammation even in people who don’t have IBD, and that’s what this article is about. Inflammation is a major factor in gastrointestinal pain and motility problems (diarrhea and constipation) and quite a few studies have shown that anti-inflammatory interventions targeted specifically at the gut have pretty clear benefits.

To understand how inflammation affects digestion, it might help to think about inflammation on the outside of your body, where you can see it. Say you fall and bust up your knee. You’ll get a bunch of localized inflammation as a normal part of the healing process. The inflammation will cause swelling and pain; that knee will be really sensitive to even light touches for a while. It’s also going to get stiff and hard to move.

Now imagine that going on inside your gut. If your digestive system is hypersensitive, that means every tiny bubble of gas will feel really awful – you might not have an abnormal amount of gas in your system, but you’ll be in a lot more pain from it. This study gives some scientific background for that: in patients with abdominal pain, the researchers found abnormal amounts of inflammatory mast cells in the lining of the gut, especially in the areas around the nerves. In other words, the real problem might not be what’s physically happening in the gut, but how intensely you’re feeling it, which is an inflammation issue, not a too-much-gas issue.

Another issue with inflammation: if the muscles of your digestive system aren’t working right, then peristalsis (that’s the process of moving food through the gut) won’t happen normally. You might be constipated or get that “brick in your stomach” feeling. That’s exactly what this study found. The researchers looked at patients with symptoms of Irritable Bowel Syndrome (IBS – that’s the diagnosis you get when your gut is acting up and nobody can tell you why). They found that patients with gut symptoms had inflammation in the part of the gut that controls movement. Movement…as in bowel movement. This suggests that inflammation might be one factor in motility issues, like constipation and diarrhea.

Irritable Bowel Syndrome in general is marked by higher levels of inflammation. In patients who start getting symptoms after a bacterial infection, this paper notes suggests that fighting off the bacterial infection may trigger an inflammatory immune response that sticks around and keeps causing symptoms even after the infection itself is gone. This paper also supports that theory. The authors noted that roughly 1 in 4 people who get infectious diarrhea ultimately go on to have long-lasting symptoms, so they studied the differences between people who do have lasting symptoms and people who don’t. And it turns out, it’s…inflammation! Specifically, it’s interleukin 1 Beta, a proinflammatory cytokine.

More importantly from the perspective of someone who just wants to feel better, anti-inflammatory treatments work pretty effectively to reduce ut symptoms. For instance, this paper found that mesalazine, an anti-inflammatory drug, reduced immune activation in the gut, improved gut barrier function, and improved well-being in IBS patients. But barring prescription drugs, there’s also quite a bit of research on what you can do with food and supplements to get similar benefits.

There are all kinds of ways to reduce overall systemic inflammation in your life, but for this post, we’re focusing on strategies with research-backed benefits for gut health specifically, not just a generic anti-inflammatory effect. These are all tweaks that can be added on top of a basic Paleo diet, which is already a powerful anti-inflammatory intervention and a huge first step for gut health.

Probiotics have pretty significant anti-inflammatory benefits, but here are two that have been research-tested for gut health specifically in humans:

If just looking at this picture makes you cringe, don’t panic! You don’t have to eat a bunch of high-FODMAPs foods to get fiber.

Fiber is always really tricky because some people have sensitivities to different fiber types, most commonly FODMAPs. But on the other hand, fiber has huge anti-inflammatory benefits because your gut bacteria break it down and produce the anti-inflammatory fat butyrate. Butyrate blocks inflammatory signaling and reduces inflammation in the gut specifically. You can get butyrate in foods (notably butter), but fermenting it yourself is better if you want to target the gut specifically, since making your own butyrate guarantees that you’ll get it exactly where you need it.

The good news for the FODMAP-intolerant: This study from the FODMAPs experts at Monash University in Australia found that, as long as total fiber is solid, restricting FODMAPs doesn’t affect colonic butyrate production. Your gut bacteria can apparently work with whatever you’re giving them, so if only low-FODMAP foods work for you, go ahead and load up on carrots and spinach to get that anti-inflammatory butyrate action .

The bad guy that everyone knows with wheat is gluten, but take a look at some of the research on wheat amylase trypsin inhibitors (ATIs), another component of wheat:

These papers suggest that wheat, not just gluten, is particularly bad for gut inflammation.

Emulsifiers are chemicals that are used to keep one food component dissolved in another. For example, they’re used in margarine, mayonnaise, and similar products to keep the fat in those foods bound up with the other ingredients so you get a uniform texture. Carrageenan is one well-known example of an emulsifier.

A couple of studies (one, two) have found that emulsifiers provoke a chronic inflammatory response in the gut thanks to the way they affect gut bacteria – getting rid of them might be helpful for people with inflammatory GI issues.

This paper and this book chapter both give general recommendations for an anti-gut-inflammation type diet, and both of them essentially recommend Paleo + the special suggestions above. The guidelines in these reviews include:

This kind of list from big review papers just confirms the value of a Paleo-style diet for treating gut inflammation, with the addition of a few extra tweaks and focus areas.

If you’re having gut symptoms, inflammation is a pretty decent culprit to start with. After starting with a basic Paleo plan, research suggests that adding some extras, like targeted probiotics and special attention to emulsifiers, is definitely an anti-inflammatory strategy to consider.