From the vintage Pyrex hounds who spend their weekends scouring antique stores to the Le Creuset devotees whose Dutch ovens are family heirlooms to the recent cast-iron renaissance, cookware has a way of inspiring devotion in the people who use it. But there’s also a dark side: dire warnings about heavy metal contamination from metal pots, plastic leaching toxins into everything it touches foods, and nonstick coatings that give off potentially deadly fumes.

Is there really anything to those concerns?

Here’s a look at a few popular types of cookware materials, and the evidence for whether or not humans cooking with them have any reason for concern about potential dangers (bearing in mind that “humans cooking with them” are not the same as “mice being injected with concentrated substances that they may or may not produce”). It’s not an exhaustive list of every potential type of cookware ever, but it’s a reasonably good place to start.

Metal cookware includes aluminum, stainless steel, copper, and cast iron. It’s durable, easy to use, easy to clean, and available in almost any price range you want – so far, so good. But the big debate over metal cookware is the potential for leaching metal into your food, especially if you’re cooking something acidic like tomatoes or lemon juice.

The most infamous is aluminum, supposedly linked to Alzheimer’s Disease and other neurodegenerative disorders. There is some evidence that aluminum exposure can be toxic to the brain at extremely high doses, especially in animals. But human studies are constantly contradicting each other, and what’s more, any plausible amount of cookware-related contamination represents a tiny fraction of the average person’s aluminum exposure. So even if excessive aluminum exposure does cause Alzheimer’s, there’s no evidence to suggest that avoiding aluminum pots and pans would be protective.

For other types of metals, there’s even less evidence of any kind of danger. For example, stainless steel supposedly leaches nickel, but there are almost no actual studies quantifying that. And this study found that even cooking tomatoes (an acidic food, which tends to increase leaching) in a stainless steel pot didn’t produce levels of nickel that exceeded the Tolerable Upper Intake of nickel. What’s more, the amount of nickel leached was reduced drastically in just 6 uses of the pot.

For cast iron, there’s some evidence that the iron may get out into your food, but for most people this will probably be a health benefit, not a risk. And it’s not even clear whether it raises iron levels in the long term: for example, in this study, researchers tried to help women with iron deficiency by giving them chunks of iron to put in their cooking pots, but after 6 months, their iron levels weren’t notably different.

What About Enamel Coatings? 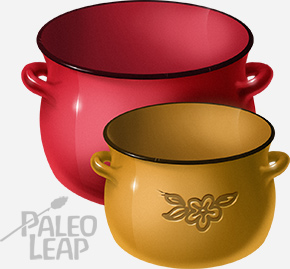 Enamel coatings over metal will theoretically protect you from any potential leaching – at least until the coating gets scratched or damaged. But since there’s not much evidence that leaching is such a big deal anyway, this is less of a concern.

The upshot: there’s not actually much evidence that metal cookware is dangerous, and it may even be beneficial.

Glazed ceramics include things like the inserts in most slow-cookers, or other ceramic dishes (e.g. casserole dishes) that have been glazed.

Here, the problem is leaching heavy metals again, in this case lead and cadmium. It’s not controversial that lead is a health hazard, and glazes from some countries have been found to have a high amount of lead that could realistically be dangerous to healthy adults (here’s a study from Tunisia, for example). But other glazes are lead-free and completely safe (e.g. most slow-cookers; here’s more on lead in slow-cookers).

A good practice is to only buy new glazed items made by a manufacturer who can verify that the glaze is lead-free (if you buy cookware made in the US and avoid imports from China or other countries with very loose environmental laws, that’s already a good start).

The upshot: be careful where you get your ceramic-glazed stuff, and you’ll be fine.

Non-stick coatings are infamous for their potential to cause health problems. Teflon is the poster child for this – it’s a particular brand of 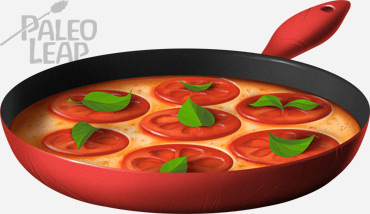 nonstick coating made with a chemical called polytetrafluoroethylene (PTFE). The problem with PTFE is that when it’s heated: it releases potentially toxic fumes containing another chemical called PFOA (also called C8).

PFOA is a serious concern for people who work with it in industrial environments or live near chemical plants where they’re exposed to it heavily. But is the amount from household use of Teflon pans actually enough to do the same kind of damage? A recent study found that “consumer products” like pans are actually a minor source of exposure to PFOA (contaminated foods and drinking water represent a much bigger area of concern). And to start causing problems, you’d have to heat up your Teflon pans really hot, much hotter than most people would turn up the stove most of the time.

On the other hand, the fumes from Teflon pans have been documented to kill birds, and they’re definitely bad for rats. There have been several reports of humans getting flulike symptoms from Teflon exposure. And more to the point, you shouldn’t really need Teflon pans if you’re eating Paleo. Their main advantage is that they reduce the need for cooking fat to grease the surface of the pan and keep your food from burning. But when you’re eating Paleo, there’s absolutely no reason to be afraid of cooking fat. It makes your food taste better and it’s perfectly healthy for you.

The upshot: there’s some evidence that they may be dangerous, and there’s no need for nonstick coatings when you’re not afraid of cooking fat. Skip them.

Clay, Glass/Pyrex, and Other Inert Materials

There’s also a whole list of different materials that are marketed as “more natural” to make cookware out of (and therefore presumably safer). The problem with all of these is that they’re not great for stovetop cooking. You can use them in the oven, but for a frying pan, you’ll need something else.

With clay, just like with ceramic glaze, it’s all in the quality. Clay can be contaminated with heavy metals, industrial runoff, and other unwanted garbage just like anything else that ultimately comes out of a hole in the ground. If the clay is high-quality, and the pot is made by a company that regularly tests for these things, it should be fine.

Clay pots can make very tender meat and stews, and they’re great for roasting chickens – you can’t brown things in the bottom like you can with a Dutch oven, but they’re a nice addition to a well-stocked kitchen.

Glass is an inert material; it won’t leach anything into food. Pyrex is basically a type of glass, and also hasn’t ever been called out for any potential health problems. It’s convenient for going from the oven to the fridge, but again, you can’t really do much on the stovetop with it.

The safety concerns of most types of cookware are based on some pretty thin evidence. It’s not that we know these things are harmless, but it’s not clear that they’re harmful, either. The best evidence for avoiding any one particular thing is for non-stick coatings. Most worries about metal leaching are overstated: even if aluminum is connected to Alzheimer’s, aluminum pans represent such a tiny fraction of daily intake that they’re not worth worrying about. And there’s legitimate reason to be concerned about lead and other heavy metals in ceramic glaze, if the item wasn’t made to high manufacturing standards, but you can avoid that by being choosy about ceramics (possibly the one situation where “pick it up for $10 at Goodwill” isn’t a great kitchen-furnishing strategy).

Paleo isn't about spending hundreds of dollars on fancy new cooking utensils, and claiming that you "need" a whole new set of triple-certified absolutely perfect pots and pans to be healthy isn't just wrong; it's pointlessly elitist and impractical for most people. For everyday cooking, very little evidence actually suggests that metal or enameled pans are dangerous to health. And glass/Pyrex and clay cookware is almost certainly safe. Aside from avoiding nonstick coatings, pick whichever cookware material or brand works best for you, and focus on the important part: making sure the food inside it is nutritious.