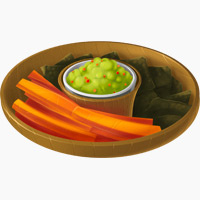 Maybe you’ve seen a pile of jicama in the grocery store by the potatoes and not known what it is. Or maybe you’ve found it in Paleo recipes but assumed this was some weird food that you’d have to go to a Mexican grocery store to get and moved past it.

Well, you’re about to learn exactly what it is, and you don’t actually have to anywhere out of the way to find it. It’s available in most grocery stores, and you can even get it at Wal-Mart if your area has a Wal-Mart with a grocery section.

So what is it and why would you want to buy it? Jicama is a root vegetable native to South America, and it has a great, juicy-crunchy texture that works equally well whether it’s raw or cooked. It’s good on its own merits regardless of what your diet is like, and if you’re trying to find low-carb substitutions for fruit or potatoes, it’s a very convenient solution.

A persistent myth about jicama is that it’s a kind of legume, probably because it’s also called “yam bean.” It’s true that jicama root does come from a plant that also produces beans, but the part most people eat isn’t actually the bean; it’s the tuberous root. The root itself is not a bean, and it’s perfectly Paleo-friendly.

Nutritionally, Jicama is high in Vitamin C and has a small amount of B vitamins and some minerals. But the really interesting thing about it is its high inulin content. Inulin is a prebiotic type of fiber – it helps feed your gut flora, which has all kinds of other health benefits down the line.

Finding a jicama should be easy; most large grocery stores have them. Jicama is very roughly round, but it can also be a little more turnip-shaped (with a point at one end), pumpkin-shaped (a little flattened out), or have some bumps. The skin is smooth and medium-brown: lighter than a coconut, darker than a potato.

You can usually find it around the onions and potatoes and other root vegetables, although it may also be randomly stuck somewhere else in the store.

Bring home your prize, and remove the outer two layers. Jicama has three layers: first, there’s an outer layer of darker brown skin; then there’s a middle layer which is off-white in color and very fibrous and stringy. Finally, you’ll get to the inner layer, which is the same color and texture as the inside of an apple.

You’ll want to take off the outer two layers, because they’re not very pleasant to eat. Use a paring knife, or cut off the top and bottom of the jicama just like you would for a pineapple, and peel away the outsides (they typically peel off pretty easily).

Now you’re ready to cook it – either as a replacement for more carb-dense foods, or just on its own merits because it’s crunchy and tasty and fun to experiment with.

As a Replacement for Carb-Dense Foods

Functionally, jicama is a great replacement for other foods that you might be trying to limit on a lower-carb version of Paleo, particularly potatoes and fruit.

In terms of sugar and carb content, here’s how jicama stacks up against some other Paleo foods. All quantities are per 100 grams of food, measured raw (about 3.5 ounces, or very roughly 1 cup)

There’s nothing wrong with white potatoes but if a lower-carb approach works better for you, jicama can be one nice replacement.

You can see that Jicama has a lot fewer total carbohydrates than other root vegetables, and a lot less sugar than an apple. And if you know how to cook it, it can make a pretty good substitute either for a hot pan full of potatoes or for a crunchy piece of fruit:

This won’t taste exactly like potatoes – it’s a little bit sweeter, and the texture is slightly crunchier with less of that starchy, pillowy-soft effect – but it’s a great substitute side dish for times you might ordinarily use potatoes.

Also try dressing it up with seasonings – if you’re missing tortilla chips, squeeze some fresh lime juice over it. Or try a quick sprinkle of chili powder for a spicier flavor.

Your resulting dish won’t taste exactly like whatever you’re replacing – substitutes very rarely do. But it’s a nice tool to have in your bag of Paleo tricks.

On its own merits

Even if you aren’t worried about carbs or sugar at all, you could still use the recipes above just because you like the taste, for a change, or for the fun of cooking something new. But here are some other recipes that might pique your interest:

It’s pretty cheap, it’s easy to find, and it’s a nice way to perk up your vegetable rotation with something juicy and refreshing during the last hot days of the summer. Why not give it a try?