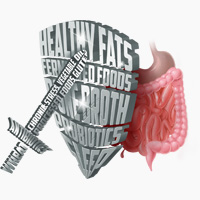 It’s a phrase that sounds like total nonsense: leaky gut? Really? The human digestive tract is not a plumbing system that isn’t up to code; how can your gut be leaking?

The name “leaky gut” makes it sound a lot sillier than it is, though. It was probably intended to be more vivid or evocative, but it ends up sounding like nonsense. If you look for the same problem under the technical names – “intestinal permeability” or “epithelial barrier dysfunction” – you’ll find a whole bunch of actual peer-reviewed research describing what it is and why it’s a serious problem.

Intestinal permeability is a serious problem that can contribute to general gut dysfunction, inflammatory disease, and autoimmune disorders: here’s a quick run-down of where it comes from and what you can do about it.

Leaky Gut: What Is It?

It’s a little weird to think about, but everything in your gut is technically still outside your body. Human bodies are shaped a little like a donut, with a hole in the middle running from the mouth to the anus. The hole in the middle of the donut is the inside of your gut – technically, nothing in there is part of your body yet. The cells of the gut lining are like millions of tiny border control police: their job is to let the good guys (water, nutrients) in and keep the bad guys (bacteria, viruses, toxins, undigested food…) out.

To get a little more specific about it, proper gut barrier function depends on…

The gut flora communicate with these two aspects of the gut barrier – for example, they affect the rate of epithelial cell turnover, support a healthy mucus layer, and influence the behavior of antimicrobial proteins – but they aren’t part of the barrier itself.

The gut barrier is obviously part of the digestive system: it has to choose what nutrients to let into your body so you can use them for energy. It’s also part of the immune system (it keeps out any potential pathogens you swallow). But while it’s attacking bad bacteria, it also has to leave your gut flora alone.

This study reviews how the gut does all this: it’s such a hard job that just keeping your gut functional takes about 40% of the energy you expend every day.

“Leaky gut,” or abnormal intestinal permeability, is when that barrier doesn’t work right. Sometimes this is because the cells lining the gut are damaged; sometimes it’s because the places where they’re joined to each other (called “tight junctions”) are weakened. The result is that the gut lining lets in things it shouldn’t be letting in – like undigested proteins or pathogens.

How does the Gut Get Leaky?

Unfortunately, leaky gut has all kinds of contributing factors; there’s no one trigger where if you just remove this one thing, your gut problems will all be solved. For most people, the problem is likely a variety of causes:

Leaky Gut: Why does it Matter?

So why should you care if your epithelial cells are letting a few undigested proteins through?

Because the gut barrier is a crucial part of the immune system, dysfunction here can also cause immune problems down the line, up to and including autoimmune disorders. The most famous case study is Celiac Disease, but Celiac isn’t the only one by far. As this study puts it: “There is growing evidence that increased intestinal permeability plays a pathogenic role in various autoimmune diseases including [Celiac Disease] and [Type 1 Diabetes]… besides genetic and environmental factors, loss of intestinal barrier function is necessary to develop autoimmunity.”

The study goes on to explain that intestinal permeability is a trigger for autoimmune disease because when unwanted pathogens and proteins cross the gut barrier, your body mounts an immune attack against them. This immune reaction can trigger an autoimmune response in people who are already genetically susceptible.

Leaky gut is also very closely tied up with gut flora dysfunction, and gut dysbiosis has been linked to problems from acne to depression to constipation to everything in between. Basically, if your gut isn’t happy, you won’t be happy either.

Nobody knows enough about the gut yet to give one “prescription” for a healthy gut, but a good start is avoiding all the things that cause leaky gut in the first place:

Just eating Paleo (including the “weird stuff” like bone broth and probiotics!) will get you most of the way there from a dietary perspective.

“Leaky gut” sounds like a silly name, but it’s actually a serious problem and not something to brush off as pseudoscience. Letting nutrients in while keeping everything else out is a hard job – if your body’s system for making it work gets thrown out of whack, it can set off serious inflammatory and autoimmune consequences down the line.