People talk about “weight” loss because scale weight is a proxy measure for fat loss. Fat is the major source of excess body mass for most people who want to “lose weight.” Measuring fat (by DEXA scans or other body composition tools) is expensive and difficult; measuring weight is cheap and easy. So people just measure weight and assume that if they lose weight, it’s because they’re losing fat.

Temporary “weight” loss can be from water weight, constipation, food in your stomach, or a million other factors. But there’s a more dangerous kind of “weight” loss: loss of lean tissue.

If the number on your scale is regularly going down, it’s probably representing a true decrease in your body mass. But it’s not necessarily fat that you’re losing. It might be muscle. But muscle is the the “weight” you want to keep!

So the question becomes: how can you make sure that the number going down on the scale (your “weight”) actually represents a loss of fat tissue, rather than a loss of your precious lean mass? 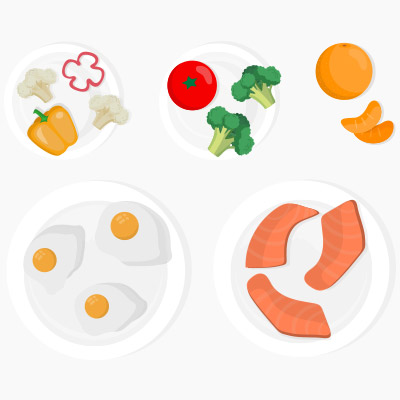 Not sure what all these percentage numbers look like in real life? There’s an infographic for that!

The most important macronutrient for losing fat instead of muscle is protein.

In this study, eating more protein helped overweight men preserve more lean mass when they lost weight. The men were put on a diet that gave them either 15% or 25% of energy from protein. But here’s a huge difference that you won’t see in the abstract: the low-protein group was vegetarian; the high-protein group got meat. (The study authors never explain why on earth they would do it like that).

So, eating a lot of animal protein is better than eating a little bit of vegetarian protein. It’s not clear whether the benefit is from the sheer amount of protein or from the animal foods (which are nutritious in their own right!) but either way, all signs point to a Paleo approach with high-quality animal protein at every meal.

On the other hand, the amount or quality of dietary carbs doesn’t seem to matter that much, provided you’re getting enough protein. This study compared four diets in obese men and women over 45:

None of the diets made any difference in the percentage of weight loss as fat. Most of the subjects lost around 20% of their weight as lean mass and 80% as fat mass regardless of which diet they were on.

Of course, the amount and quality of dietary carbs might make a big difference in how much total weight you lose. So in that sense, they’re important. But if you find a carb level that works for you for weight loss, there’s no need to tweak it in search of the perfect ratio for fat loss.

Another Tool to Lose Fat: Exercise

This study also found that exercise was specifically better for reducing visceral fat, the dangerous kind that actually causes health problems. Even without any reduction in weight, exercise reduced visceral fat by 6%.

Just to be clear: this is not the same thing as saying that exercise “causes” weight loss. Exercise almost never affects weight without diet changes. But exercise does take weight gain or loss in the direction that you want to go:

This section is last for a reason: supplements are supplemental. They can’t substitute for a lousy diet and lifestyle. But if you’ve already got your protein and your exercise dialed in, maybe consider…

Typically, when the number on the scale goes down, you’ve lost some fat, but also some lean mass (muscle, organ mass, etc.). For health reasons and for aesthetic reasons, you probably want to keep that second number (lean tissue loss) as low as possible.

Eating enough protein – around 25% of calories – can probably help. Some supplements, like glycine and BCAAs might also be useful. But what helps even more is exercise. Even though it doesn’t cause weight loss on its own, exercise is still a powerful tool for making sure that weight changes (loss or gain) go in the direction you want (fat loss/muscle gain) instead of turning into a problem (muscle loss/fat gain).