To quickly review from Part 1:

Now for the encouraging part: take a look at some ways to manage leptin levels without actually taking leptin supplements at all.

Since leptin injections require a doctor’s prescription, they’re pretty much off the table for most of us. But even without the big guns, it’s possible to improve your own leptin sensitivity in various ways. Most leptin resistance is acquired, not genetic. There are a very few people who genetically have leptin problems, but more often, it’s something that developed over time, in response to (you guessed it!) diet and lifestyle. And that implies that diet and lifestyle might also be a way to alleviate the problem.

The two goals for improving leptin levels are: 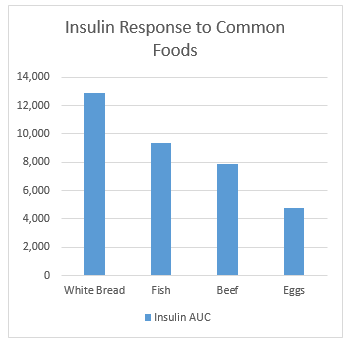 When it comes to reducing leptin resistance, the first place to look is insulin. Leptin and insulin are buddy hormones. Insulin is mostly associated with carbs, but this is actually not accurate: protein also raises insulin levels. Unless you’re eating tablespoons of pure fat, your meal is provoking some kind of insulin response. You can see the insulin response to some common foods in the chart to the right: Paleo foods are lower than white bread, but nothing near zero.

If you’re eating Paleo, you’re already doing this. But that might be one reason why Paleo weight loss is often easier: sugar (and particularly fructose) seems to have a disproportionate effect on leptin resistance. A caveat though: most of these studies were done in mice, and many of them used ridiculous dietary levels of fructose (no free-living human would choose a 60% fructose diet). On the other hand, here’s a study done in humans suggesting the same thing (that fructose is more likely to create leptin issues than glucose). So go easy on the honey while you’re trying to normalize your leptin levels.

There’s a two-way feedback loop between elevated leptin levels (as in obesity) and chronic inflammation. Inflammation raises leptin levels, and too much leptin is inflammatory. The result is what this study calls “a loop whose components influence each other in promoting inflammation:” in other words, a vicious cycle.

This suggests that lowering inflammation might be a helpful strategy for managing the leptin abnormalities associated with obesity. From a diet and lifestyle perspective, that means…

Increase Leptin Production (from sources other than fat)

The second way to manage leptin levels for easier weight loss is to maximize your leptin production from sources other than body fat. The more leptin you get from other places, the less body fat you’ll need to keep yourself out of starvation mode.

Calorie restriction also lowers leptin levels independently of fat mass. One way to avoid this is to schedule a “leptin reset day” by significantly raising your calorie intake once every week or every two weeks. This does not have to be unhealthy food, but it has to be carbs. Eating a lot of fat is very tasty, but it won’t do much for your leptin levels. So bust out your favorite safe starch and eat a massive pile of it: why not go for some mashed potatoes with pesto, or maybe a sweet potato stuffed with fruit and nuts? After all, if you’re going to be indulging in a rare calorie/carb splurge, you might as well make it delicious.

You know a great way to send leptin levels through the floor? Staying up all night. In this study, for example, average leptin levels dropped by 20% after 6 days of mild sleep deprivation. So get your shut-eye!

Leptin was only discovered in 1994 – that’s barely enough time to start looking into what it does and how it works. Researchers are still debating exactly what it does (for example, whether it works as a satiety hormone, or whether it’s more a response to starvation). We’ve come a long way from the simplistic idea that injecting obese people with leptin would make them thin, but we certainly haven’t figured it all out by a long shot.

What we do know is that leptin is important – maybe even more important for weight management than insulin. Leptin resistance can put a damper on your weight-loss results no matter how much “willpower” you think you have: nobody can hold out forever when their brain literally thinks they’re starving to death.

It’s still way too early in the game to have anything like a comprehensive list of strategies for managing leptin, but some good bets are:

Do you have any other tips that help you manage leptin levels? Let us know on Facebook or Google+