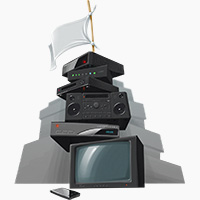 Stop and think for a minute about the amount of time you spend every day interacting with information on a screen. You might wake up in the morning, reach for the phone that doubles as your alarm clock, and get sidetracked for 15 minutes catching up on email before you even get out of bed. The phone will stay with you all day, tempting you to whip it out of your pocket at the slightest feeling of boredom or loneliness. Maybe you work at a computer all day, then go home to watch TV or catch a movie.

“Electronic media” – that vast and sprawling network of information, entertainment, and advertising that we take in through various boxes of metal and circuitry – is an increasingly dominant form of consumption in the modern world. And in the same way that taking a short (or a long) break from food consumption can be healthy, embarking on a “media fast” to experience the unplugged life for a while can have benefits you not even realize until you disconnect for a while.

Most kinds of media come packaged with advertisements, and almost all of the edible material advertised is nutritionally bankrupt junk that barely deserves the label of “food.” You might think that the ads don’t affect you, but science says otherwise: one recent study found that after watching an ad just once, adults (even ones who thought they were immune to advertisements) were more likely to want to eat the product featured. In kids, the effect is even more pronounced. If you take a break from all your electronics, you don’t have to deal with this kind of temptation, and a healthy diet becomes much easier to stick to.

Television and computer screens give off a light wavelength called blue light, which is similar to the bright midday sun. Exposure to this kind of light in the evening can trick your body into thinking that it’s still the middle of the day, making it hard to get to sleep when you finally power down the computer and hit the sack. Specifically, blue light reduces the production of a hormone called melatonin, an important influence on the natural rhythms governing your body’s sleep-wake cycle.

It doesn’t take much, either: one study found that just 30 minutes of blue light exposure during the hour before bed significantly reduced the normal melatonin release associated with preparing to sleep, and increased subjects’ levels of alertness and wakefulness. Since sleep is so important for good health, anything that gets in the way of a restful night has the potential to cause a cascade of chronic health issues. By definition, taking a media fast gives you a break from this melatonin-disrupting screen time: you get better rest at night, and more energy during the day.

“Activity” doesn’t mean “exercise,” here. Nobody switches off their iPhone and immediately decides that now would be the perfect time to go run some tabata sprints or see how many burpees they can crank out in 5 minutes. But glowing screens can be almost hypnotic in their ability to glue you to the couch. Turning off the TV or taking a break from the computer forces you to find something else to do: it might mean you go outside to do some garden work, clean your bathtub, or simply take a walk to enjoy a beautiful afternoon.

This is a huge health benefit because sitting down for hours every day is a major contributor to chronic poor health, especially obesity and obesity-related diseases. One study even found that it’s more of a risk factor than smoking. An active lifestyle isn’t about killing yourself for half an hour at the gym and then sitting for the rest of the day; it’s about finding ways to incorporate more movement into your whole life, including your leisure time. Turning off passive forms of entertainment and finding something else to do can be one way to make that happen: it can’t possibly be more sedentary than watching TV, and it’s likely to be less.

Yes, free time is a health benefit. Think of how many people put off making healthy changes in their lives because they “don’t have time to cook” or “can’t make it to the gym every day.” It’s possible to eat a perfectly healthy diet in a time-crunched schedule, but it’s certainly much easier and more pleasant when you can take your time making dinner and experiment with new and different recipes.

Unplugging can give you that time. According to a 2011 survey, the average American spends 2.8 hours every day watching TV alone (that’s not counting time spent online or on your smartphone). Just one day a week of leaving the TV off after work can net you nearly three extra hours for prepping work or school lunches for the days ahead, or making a big shopping trip to stock up on essentials. This makes a healthy lifestyle easier – which means you’re much more likely to stick to it.

A 2010 study called Unplugged challenged college students around the world to go without media for just 24 hours: no phones, internet, or TV. The students’ descriptions of life without media sound like drug addicts’ stories about withdrawal: most of them actually couldn’t even make it through the day. But the ones who did noticed some surprising benefits. Turning off the constant flow of Facebook status updates was actually quite relaxing. It helped the students live more in the moment, enjoy the world around them, and slow down the pace of their lives. Many of them didn’t even realize how much stress the media brought into their lives until they shut it off.

Other research backs this up. Smartphones let people bring the office home, so they’re never really off-duty and find it hard to relax. Even non-work-related applications, like social media, can be stressful because there’s a perpetual flow of information demanding attention, time, and energy. It’s a constant pressure to stay on top of your blog reader, Twitter feed, and news updates; it saps energy away from more important tasks, and scatters it across a hundred different tidbits of information that you have to process and respond to every minute.

This kind of stress can sabotage even the healthiest of diets. The mind and the body aren’t separate systems; among other problems, stress can alter the gut flora, prevent healthy immune function, and impair athletic performance. Finding a way to “unplug,” even if it’s just for a few hours every day, can give you a break to recharge, time and space to be alone with your thoughts and get some perspective on the latest work emergency or social drama.

Another surprise waiting for the students in the Unplugged study was how much more meaningful their social life became when they weren’t checking their phones every 10 minutes. When they weren’t spending their time in thousands of shallow interactions (clicking the ‘like’ button and moving on to the next thing), they reported paying more attention to other human beings, enjoying deeper and more serious conversations, and generally feeling more connected to friends and family. Their social activities became narrower in scope, but more emotionally rewarding.

What does this have to do with health? Everything! A strong network of friends and family is incredibly protective against all kinds of acute and chronic diseases. The most famous example is the Roseto effect: in the town of Roseto, Pennsylvania, a tight-knit community of Italian immigrants experienced extremely low rates of heart disease compared to surrounding towns, a difference that disappeared as the close family structures began to disintegrate. We might not understand exactly how it works, but community is crucial for mental and physical health in very powerful ways, and cutting back on media use can help build those strong relationships.

So how can you go about getting all these fantastic health benefits? Think about media fasting the same way you think about food fasting: a flexible basic concept that you can adapt to your own lifestyle. The idea is very simple (just don’t use your electronic media devices for a certain period of time), but the variations are endless.

If you think about our evolutionary heritage, it’s fairly obvious that we aren’t genetically wired for the constant flow of information that our brains have to process today. The smaller social groups and face-to-face interaction of the Paleolithic were miles away from the steady diet of news, social updates, and other information that most of us receive from all around the world every day. That doesn’t mean we can’t handle it (the brain is not static, and it definitely has the capacity to adapt to new ways of living), but it does suggest that we might need some time out every once in a while to take a breather from the increasingly intense stream of demands on our time and energy. As little as one screen-free hour a day can help improve your physical and emotional well-being in so many ways: get together with a friend, or just commit to going solo, and give it a try.